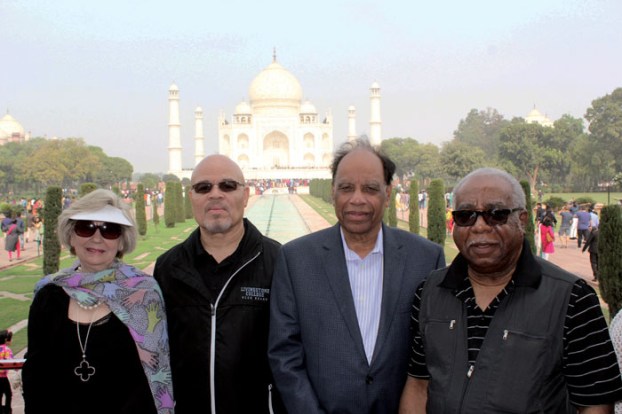 SALISBURY — State Alexander says his trip to India with two Livingstone College colleagues and Salisbury’s mayor was an example of synergy.

“It was sort of a unique dynamic that took place with all of us being there together that we didn’t anticipate,” Alexander said. “We were hoping that it was going to be profitable and beneficial to both of us, and it turned out to be so.”

State, who is director of public relations for Livingstone College, was scheduled to go to Invertis University in Bareilly, India, because the university has an exchange program with Livingstone.

The chancellor of Invertis had come to Livingstone in 2016 and had invited Livingstone’s president, Jimmy Jenkins Sr., to visit Invertis in return.

But when Jenkins was unable to make the trip at the last minute, Alexander decided not to let the opportunity go to waste. Tony Baldwin, Livingstone’s enrollment manager, and Rajeshwar Sharma, dean of the business school, joined him along with Mayor Karen Alexander.

When the mayor heard about the delegation’s journey, she said she wanted to join them.

The four arrived in New Delhi in waves, with some arriving Nov. 13 and some Nov. 14.

From there, the delegation went to visit Invertis University in Bareilly and Lovely Professional University in Phagwara, a school that Livingstone hoped to establish an exchange program with.

Karen Alexander said Livingstone’s main goal for the trip, other than to visit Invertis, was to create a memorandum of understanding between Livingstone and Lovely Professional that might allow for an exchange program.

“Now they have an agreement where they will actually be sending students and a professor, or staff, to spend time here. And then the same thing will happen with the Livingstone students and professors,” the mayor said.

Sharma, who initiated the exchange program with Invertis three years ago, got the idea to establish a relationship with Lovely Professional after speaking with his wife’s niece, who works there.

“It was always my desire that we expand what we have,” Sharma said.

The delegation also was invited to participate in an international water management conference that happened to be scheduled during the trip.

“That’s what I meant by the synergy, is that it wasn’t anything on our agenda that, as you said, one particular thing,” State Alexander said. “And we were exploring what could happen, what could be.”

“And I think because of the things that we brought up, they invited us in,” said Karen Alexander.

She said that when she decided to go on the trip, she had several goals.

“Obviously be of any assistance that I could to them — and they are the professionals in the education realm — but also to create a relationship between Bareilly, the town in which Invertis is located,” she said.

She said officials in Bareilly are dealing with many of the same issues that Salisbury deals with — management of solid waste, water management and how to handle large events.

“So because my profession is architecture and I specialized in sustainability, then I have a huge knowledge base in that area. So we talked about a lot of things that we might learn from each other,” she said.

Although the mayor and the Livingstone delegation could have taken separate trips, all four participants agreed that they are glad to have done it together.

“One of the things we wanted to be sure was to exhibit how we have a real town relationship with our colleges and universities, and that is what I think Mayor Alexander was able to show them, how we collaborate well with all of the institutions that are here. And especially with Livingstone. She’s a great friend of the college, so it was an easy way for us to go together because we’ve already been collaborating,” State Alexander said.

“It was wonderful because I felt like I was just going there with really good, close friends,” the mayor said.

All four members of the delegation plan to return to India and to continue strengthening the relationship between Salisbury and Bareilly and Phagwara.

The first class of exchange students will come to Livingstone in August.

SALISBURY — Teachers and administrators at one Rowan-Salisbury school hope to transform its classrooms with art. On Monday, Lea Anne Thomas,... read more