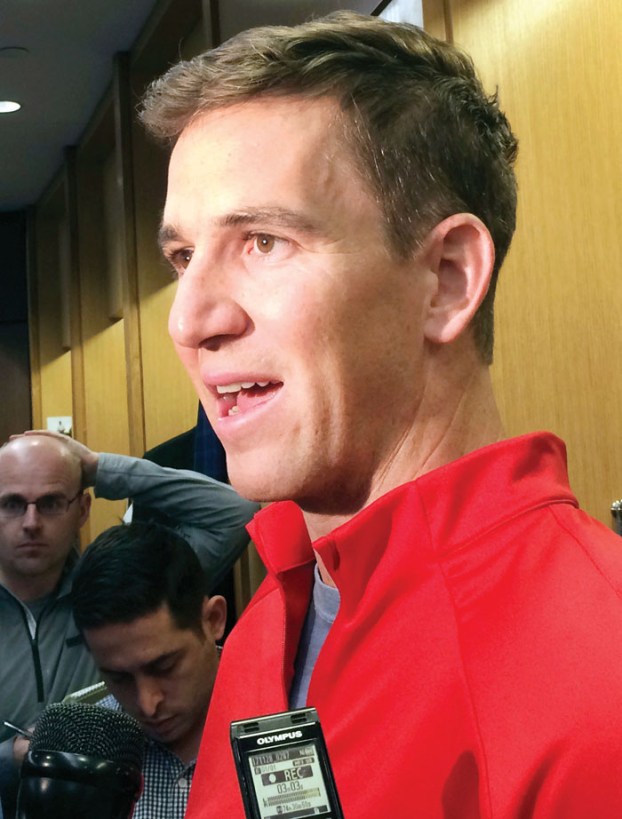 New York Giants quarterback Eli Manning speaks with reporters at the NFL football team's training facility, Tuesday, Nov. 28, 2017, in East Rutherford, N.J. The Giants announced on Tuesday that Geno Smith will start in place of Manning when they face the Raiders in Oakland on Sunday. (AP Photo/Tom Canavan)

EAST RUTHERFORD, N.J. (AP) — The Eli Manning era with the New York Giants may be coming to an end.

And if it is, it is ending ugly.

The Giants announced Tuesday that the two-time Super Bowl MVP was being benched for the first time in more than 13 years so they could evaluate the other quarterbacks on the roster over the final month of a lost-and-injury-filled season.

The decision to sit the 36-year-old Manning was totally unexpected, especially with five games left in the regular season.

It was clear the decision hurt and annoyed Manning, who has been the face of the Giants (2-9) since they made a bold draft day trade with the-then San Diego Chargers in 2004 to swap first-round picks and get the No. 1 overall selection to the Meadowlands.

Manning expressed his unhappiness but once again he played the good soldier, voicing his support for veteran Geno Smith, who will start against Oakland on Sunday.

His emotional pain was all over his face. His eyes welled with tears talking to reporters. His chin quivered when asked about how much this hurt. His face got red the more he talked.

Coach Ben McAdoo gave Manning the option of starting to keep his streak of 210 consecutive starts alive, but he didn’t want any part of that.

“You start knowing you are going to come out of the game to keep a streak alive, maybe, that’s not what it is about,” Manning said.

“It’s not a preseason game where you are going to start to the half, the next week a quarter, a series, that’s not fair. That’s not fair to me, not fair to Geno, not how you play. You play to win. When you are named the starting quarterback you think it’s your job to go win the football game.

“If you are going to play a little bit, I didn’t think it was the right way to play,” said Manning, who became the Giants starting quarterback 10 games into his rookie season in 2004, which was about a month or so before Eagles quarterback Carson Wentz turned 12 years old.

Manning’s voice broke when asked how this one hurt, noting it was one of his hardest days as a Giant.

“It’s been a hard day to handle this, but (I’ll) hang in there and figure it out,” he said.

Manning spoke with the media for less than four minutes. He then took his backpack and left the locker room.

McAdoo said he made the decision to start Smith over the weekend, and co-owner John Mara and general manager Jerry Reese were in agreement.

“This is not a statement about anything other than we are 2-9, and we have to do what is best for the organization moving forward, and that means evaluating every position,” Reese said in a statement.

“I told Eli this morning that an organization could not ask for anymore in a franchise quarterback. He has been that and more. Nobody knows what the future holds, but right now, this is what we think is best for the franchise.”

McAdoo, the second-year head coach, said the organization needed to learn more about Smith and rookie third-round draft pick Davis Webb in the final weeks of the season. Smith took four snaps in a blowout loss to the Rams. Webb has not played.

McAdoo refused to say if this was the end of the Manning era.

“I have a lot of confidence in Eli as a player, as a quarterback,” McAdoo said. “But at this point, it’s my responsibility for the organization to make sure we take a look at Geno and at some point take a look at Davis and give them the opportunity to show what they can do.”

Manning and Smith were told about the decision on Tuesday, and later the team was filled in.

McAdoo also plans to give Webb an opportunity, but probably not this week. Manning, who recently passed the 50,000-yard mark, will be the backup.

Webb called Manning the best teammate he has ever had.

“If you had a Mount Rushmore of not only New York Giants, but New York athletes, he’d be on it,” Webb said.

Manning’s streak is the second-longest streak by a quarterback in NFL history, behind Brett Favre’s 297.

Manning has started every Giants game since Nov. 21, 2004, when he took over for veteran Kurt Warner in the 10th game of his rookie season.

Warner, now a NFL Network analyst, criticized Tuesday’s decision by the Giants and said he was happy that Manning said he didn’t want to start to protect his streak.

A second-round pick in 2013, Smith signed with the Giants as a free agent in the offseason after being released by the Jets. He played in only two games in 2016 with his season ending with a major knee injury.

Smith told Manning that he supports him and has his respect.

“This guy has done a tremendous job in this league,” Smith said. “He has done a bunch of things for this organization and none of that can ever be taken away or forgotten. This is a business and it’s tough. My number is up so it is my time to go out there and do what I am supposed to do and make sure I get the job done.”

Manning holds almost all of the franchise’s major passing records. This season, he has thrown 14 touchdown passes and seven interceptions. He will turn 37 on Jan. 3.

From staff reports CHINA GROVE — Carson’s boys shot the lights out early and won against Concord, 82-64, on Tuesday... read more