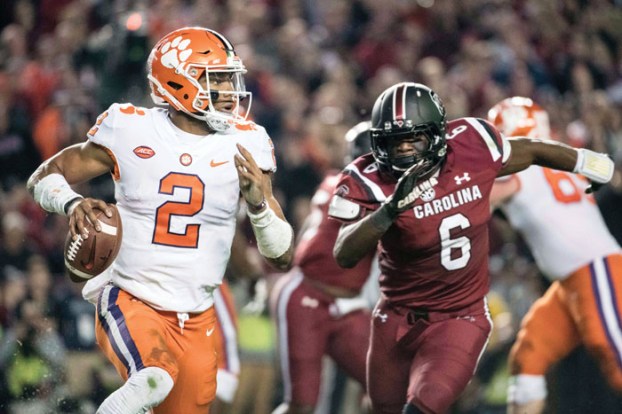 Clemson is No. 1, followed by Auburn, Oklahoma and Wisconsin in the last College Football Playoff rankings before the semifinals are set by the selection committee on Sunday.

Alabama fell from No. 1 to fifth in the new rankings Tuesday night after losing to Auburn, and Georgia was sixth. Miami slipped after taking its first loss of the season last week from No. 2 to seventh, just ahead of Ohio State at eighth.

Each of the top four teams plays a conference title game this Saturday against another highly ranked team, creating potential play-in playoff games. Clemson faces Miami in the Atlantic Coast Conference championship; Auburn and Georgia play for the Southeastern Conference title; Wisconsin faces Ohio State for the Big Ten title; and Oklahoma faces No. 11 TCU for the Big 12 title.

If the top four win out, the semifinals likely would fall into place: Clemson would face Wisconsin in the Sugar Bowl semifinal on New Year’s Day by virtue of giving the top seed a regional advantage, and Auburn and Oklahoma would play in the Rose Bowl semifinal.

It is likely Miami would jump into the top four by beating No. 1 Clemson and winning the ACC and same goes for Georgia if it can win a rematch against Auburn. The intrigue would start if Oklahoma and/or Wisconsin lose.

The selection committee could be faced with a choice between Alabama (11-1) and Ohio State (10-2). The Crimson Tide’s resume has no wins against teams currently in the top 15 and it is done playing, but the Buckeyes have two losses by double digits, including a 31-point blowout at Iowa.

CLEMSON, S.C. (AP) — Clemson is relishing another chance to play in a big game.

It’s nothing new for the accomplished Tigers.

Clemson, No. 1 in The Associated Press poll and the latest College Football Playoff rankings, is 39-3 the past three seasons, including 13-1 against ranked opponents. Next up is No. 7 Miami (10-1) for the Atlantic Coast Conference championship .

The Hurricanes fell from second in the CFP to seventh after losing 24-14 at Pitt last Friday.

Clemson coach Dabo Swinney is grateful his players understand what it takes to succeed in the biggest games. But he thinks this year’s challenges have molded the current team more than past triumphs.

“We’ve had guys that have started in an ACC championship game and I think that’s important,” Swinney said Tuesday. “But I think it’s more what their experience is with this team this year.”

And they’ve had plenty of marquee games this season to toughen most of the newcomers, particularly on offense, on this latest run.

“That’s where this team’s confidence comes from,” Swinney said.

Still, players who have gone through it before know how to prepare and compete when the stakes are the highest, linebacker Dorian O’Daniel said.

“As far as been there, done that, we’ve been there and we know what it takes,” he said.

That was particularly critical for a team that lost 11 starters from its national title season in 2016, seven of those coming on offense, including first-round NFL draft picks in quarterback Deshaun Watson and receiver Mike Williams.

Slowly, the team gelled into a unit that defied expectations, Swinney said. A couple of the newcomers earned spots on all-ACC teams: Center Justin Falcinelli, replacing mainstay Jay Guillermo this fall, was picked first team while freshman tailback Travis Etienne, who leads Clemson with 720 yards rushing and 12 touchdowns, made the third team.

The biggest question about Clemson centered on quarterback Kelly Bryant, who saw limited time the last two seasons. Bryant struggled last spring at times in his earliest attempts to adjust to being the guy, Swinney said.

Once fall camp came around, there was no doubt that Bryant would take over the offense. He has completed 66 percent of his throws for 2,426 yards, 12 touchdowns and just six interceptions. Bryant also has rushed for 639 yards and 10 TDs.

“I’m feeling a confidence there and I’m feeling confident on this team,” Bryant said. “The coaches believed in me as the season progressed to get the job done.”

Miami coach Mark Richt accepts that Clemson has the clear edge in recent postseason experience. He believes, however, the Hurricanes have had several crucial games this season that have given them enough moxie to compete with the defending national champs.

Richt said the Hurricanes’ 41-8 home win over Notre Dame was a raucous atmosphere that his team handled well.

“That was about as big as it gets,” Richt said. “It was good to have that experience.”

Clemson cornerback Ryan Carter is happy for any edge the Tigers might bring to the title game — and experience is a major one.