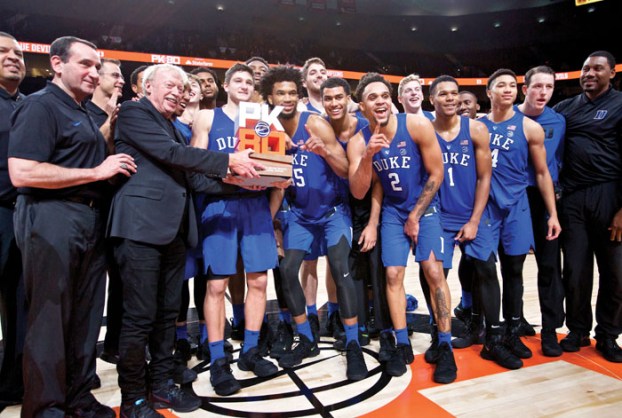 Duke now unanimous No. 1, Arizona falls out of AP Top 25

Duke pulled off two big comebacks to become the unanimous No. 1 in the AP Top 25 men’s basketball poll. Now Arizona could use one of its own from a holiday-tournament stumble that dropped the Wildcats from No. 2 to out of the poll in a week.

The Blue Devils (8-0) were atop all 65 ballots in results released Monday after they won the PK80 Invitational’s Motion Bracket in Portland, Oregon. They picked up the 11 first-place votes that last week went to Arizona, with the Wildcats (3-3) turning in a stunning 0-3 showing in the Battle 4 Atlantis in the Bahamas.

That made them the first team to go from No. 2 to unranked in a week since Louisville in 1986-87 after its own November tournament flop in the Great Alaska Shootout.

Florida checked in at No. 6, followed by Kentucky, Wichita State, Texas A&M and Miami to round out the top 10.

It ultimately took only a month for the Blue Devils to convince all the poll voters that they’re the nation’s top team. They had roughly half the first-place votes (33) in the preseason poll, climbed to 54 votes after beating then-No. 2 Michigan State in the Champions Classic in Chicago — and now own them all.

“It’s November, whatever happens we have to use it as the process of growth,” Duke coach Mike Krzyzewski said afterward. “Our goal is to keep getting better.”

Reigning national champion North Carolina slid from No. 9 to No. 13 after its first loss since last season.

The Tar Heels (5-1) lost 63-45 to the Spartans in the PK80 Invitational Victory finale while shooting a program-record-low 24.6 percent. It was their first loss since falling to Duke in the Atlantic Coast Conference Tournament semifinals in March, snapping an 11-game winning streak that included their win against Gonzaga for the 2017 title in Glendale, Arizona.

Arizona’s farewell aside, Xavier (5-1) took the biggest fall by going from No. 15 to No. 21 after losing to Arizona State in the Las Vegas Invitational title game. USC (4-1) slid four spots from No. 10 to No. 14 after the Texas A&M loss.