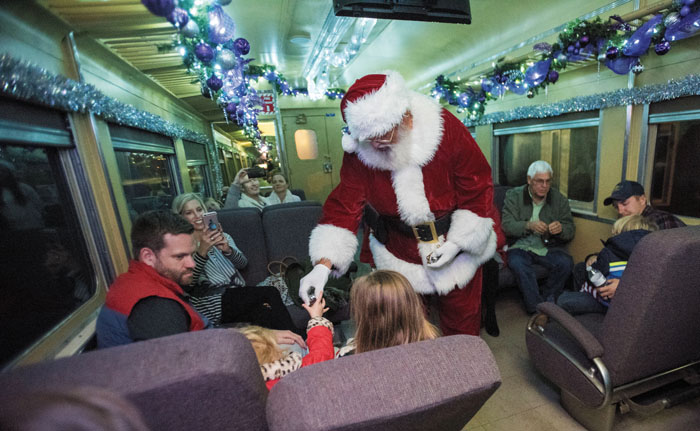 JON C. LAKEY / SALISBURY POST Santa Claus hands out the First Gift of Christmas to the riders in the car. The Polar Express continued this past weekend with trips to the North Pole to visit Santa Claus and receive the first gift of Christmas. The popular holiday event draws the young and young-at-heart to the North Carolina Transportation Museum.

SPENCER – The most wonderful time of the year started in mid-November with the N.C. Transportation Museum’s “Polar Express” train ride.

This year is the ride’s fourth in operation. According to Mark Brown, the museum’s public relations director, its popularity continues to grow.

“One of the most common statements we get on our Facebook page is ‘we’re making this a family tradition,'” said Brown. ” … It’s a great start to the Christmas season.”

With more seats and trains available to fill this season, some 50,000 tickets have already been sold. Only two rides have seating available: the 8:30 p.m. rides on Dec. 18 and 19.

But what exactly is the Polar Express experience, and why is it bringing so many people to the area?

The ride is modeled after the 1985 children’s book and 2004 movie of the same name. The book was written by Chris Van Allsburg, and parts of the ride are narrated by the author.

Attendees come dressed as the story’s protagonist: in Christmas jammies. They board the train, and are entertained by singing and dancing chefs during a trip to the ‘North Pole.’

Entertainment includes a reading of “The Polar Express” alongside of hot chocolate and cookies.

At the North Pole (or the museum’s roundhouse), Santa Claus greets the crowds as he loads up his sleigh for the season.

Santa also stows away for the return trip, making a pass through the train to give each rider the first gift of Christmas: a sleigh bell, another nod to the book and film.

On board the train, there was much discussion of Christmas wish lists.

One of the chefs, Matthew Windsor from Catawba College, approached 3-year-old Bennett Kate Batts and 7-year-old Brooklyn Batts, about what they’d like to find under their tree.

Bennett wanted a baby: a real one. Her older sister seemed less than enthused about the concept of new sibling.

Bennett, however, remained quite confident in Santa’s ability to meet her Christmas request.

This atmosphere of belief and wonder is easy to come by on the ride. Event coordinators have taken great care to make the experience nothing less than magical.

Each train car is decorated with different themes: purple and silver ornaments, garland and tinsel or gingerbread men, for example.

Additions to décor this year included the names of Santa’s reindeer on roundhouse stalls and snow falling from the trees where the trains boarded.

Brown said that the cast and crew of the Polar Express is entirely volunteer and coordinated by Lee Street theatre.

Becca Lewis, a student at Salisbury High acting as a chef, said she’s been working on the ride for all four years.

“I keep coming back because of the people I work with,” she said. “I also love making the kids happy with all the things we do — the dancing, singing and hot chocolate.”

This year’s first-time riders seemed to hold the experience in just as high of esteem.

Lauren and Darrian Morehead were there with their 11-month-old son, Lawson, and Lauren’s parents, Mark and Ginny Griffin.

The Moreheads and Griffins traveled from Burlington. Others in attendance came from further destinations both in and out of state.

There were Ashton and Taylor Jackson there with 20-month-old son Myers — from Raleigh. Taylor Tompkins came out from Nashville, Tenn., with two-year-old son Walter and several family members.

Brown said, of course, that a child is not necessary to ride.

“We get asked all the time, ‘Do I need to have a child to do this?’” he said. “Absolutely not. This experience is for everyone.”