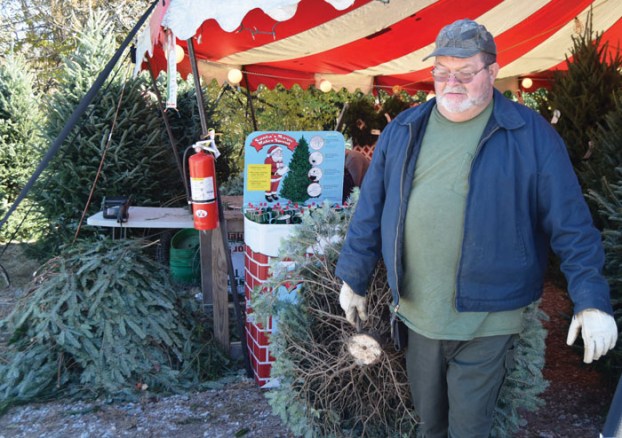 Gary Clawson, a seller with Icicle Mountain off Jake Alexander, helps carry a tree out of the tent. While some sellers have reported shortages, Clawson and other local sellers aren't among them. Rebecca Rider/Salisbury Post

SALISBURY — Before it’s placed in a stand and covered with lights and glimmering ornaments, a Christmas tree spends a lot of time growing. Gary Clawson with Icicle Mountain trees said it can take up to 10 years for a seven- to eight-foot Christmas tree to mature.

There’s a lot that can go wrong during a decade of growing — frost, freeze, bugs and disease. It’s why growers like Danny Spencer, who owns Icicle Mountain, spend time out with their trees every month, spreading lime and fertilizer or trimming limbs so that when year 10 rolls around, families can pick out their perfect Christmas tree.

And while rumors are flying about a Christmas tree shortage, Salisbury sellers are scratching their heads.

“I don’t see it,” Michael Blowers with River Ridge, off Jake Alexander, said.

Blowers lives in Ashe County, home of the much-desired Fraser Fir, and makes the trek down to Salisbury to sell trees for River Ridge once a year. This is his fifth year selling for the farm, and River Ridge’s 30th year on the same plot of land in front of Planet Fitness.

According to Blowers, news stations have reported that a shortage is expected because when the recession struck in 2008 growers anticipated decreased demand, and so replanted fewer trees than normal.

While trees planted in 2008 would be about the right height to sell this year, Blowers said, he hadn’t seen any farms closing down or struggling due to decreased demand, and hadn’t seen evidence of a shortage in his native West Jefferson.

And if there was one, it hadn’t reached River Ridge — and, by extension, Salisbury. Blowers said the tent on Jake normally receives and sells between 600 and 700 Christmas trees each year.

“I’ll have every one of those,” he said of this year.

Just down the road at the Icicle Mountain tent, Gary and Betty Clawson shrugged their shoulders. The supposed shortage hadn’t reached Spencer’s farm, either.

Gary said that a late, hard freeze hit some farms in the area about five years back. It would have been enough to affect the crop.

“That hard freeze burnt the tender tips off,” he said, “and it takes two to three years for them to grow out.”

But Icicle Mountain had been unaffected by the weather.

The tent sits just next to Jerry’s Shell station on Jake Alexander, and it’s the farm’s 17th year on the spot.

John Hutton, store manager at Godley’s Garden Center, said he had heard about the shortage, but didn’t think it would be a real issue for most sellers. It was when a seller wanted to re-order more trees that they might run into problems.

“It’s a real deal. I think everyone kind of spoke for the amount of trees they wanted early on. But there may not be any more of getting more than you asked for,” he said.

Godley’s has all its trees up and ready for sale, and Hutton anticipates they’ll be available through Dec. 22 or 23. And unless there’s a sudden rise in demand for Christmas trees  — which would be unusual for the area — the store will be in good shape for the holidays.

“I would think that’s where we might run into problems,” he said of higher demand. “…But historically we don’t need to worry.”

In fact, all three sellers are looking forward to a good Christmas season, offering trees of varying sizes as well as hand-made wreaths. River Ridge even has a little bit of Mistletoe to offer, courtesy of a Salisbury family.

This year, Christmas trees sales started the week of Thanksgiving, and will be available until just before Christmas.

Families can choose to cut their own trees from growers like Pinetop Farm or buy them pre-cut — from big box stores like Lowes and Food Lion, from local shops like Rufty’s Garden Shop or Godley’s Garden Center or from returning independent sellers, like River Ridge and Icicle Mountain.

Icicle Mountain will be selling trees until Dec. 18 or 20, depending on local demand. River Ridge will be on site until Dec. 23.