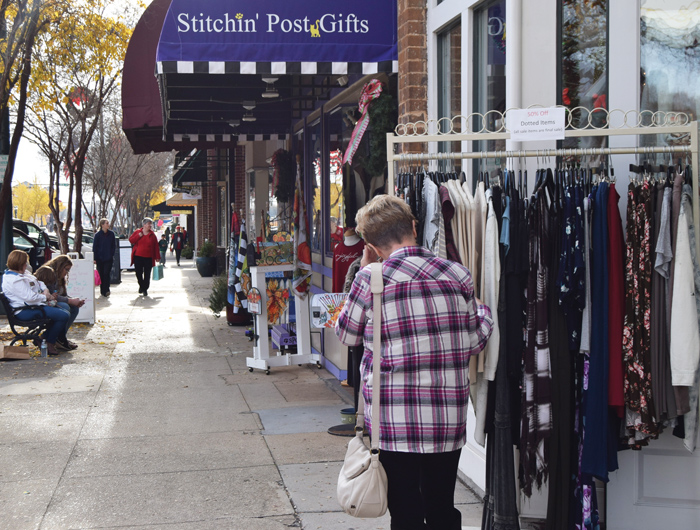 Business owners say that Small Business Saturday is one way that they build strong ties with the community. Rebecca Rider/Salisbury Post

While shoppers strolled the streets, bags and gifts in hand, business owners took time to appreciate their community, as well as the extra sales.

“I love that people are purposeful and mindful in their shopping and are willing to take that little extra effort to come downtown and support their community,” said Wendy Beeker with South Main Book Company.

While the weekend after Thanksgiving is always a profitable one for businesses, Beeker said she’d met several shoppers who mentioned that they’d come out specifically in support of Small Business Saturday.

She and other downtown business owners said they noticed an uptick in shoppers starting Friday, as many shoppers began to include smaller stores in their Black Friday plans.

“I feel like business has picked up in downtown in the past few days, which is good,” said Shakira Humble, sales and marketing manager with Caniche.

Dennis Lunsford, owner and operator of The Kitchen Store, said that he expected to see increased traffic and sales throughout the end of the holiday season — but Small Business Saturday was the big kickoff.

“It’s a huge difference and it’s no comparison to what a normal Saturday would be,” he said.

Downtown Salisbury, Inc. hosted several events to draw people downtown over the holiday weekend, starting with a Holiday Night Out on Friday. Saturday morning, a free photo opportunity with the Grinch and Santa Claus drew families to Bell Tower Park, and organizers said they hoped visitors would pay a visit to nearby shops, as well. The organization also handed out materials promoting Small Business Saturday for a week prior to the event.

But for some, the day went beyond increased profits — it was a sign of community unity and support.

“We want to give back to our community where we live,” Humble said. “And I feel like it’s important to help people who help us. …Giving back is important — it doesn’t matter if it’s the little things. And I feel like people are better about it in Salisbury.”

Katelin Rice, promotions coordinator for Downtown Salisbury, Inc., agreed that days like Saturday strengthened ties between businesses and the community.

It’s something shoppers appreciate, as those out and about Saturday afternoon said they loved the atmosphere of downtown, and the crowds included people from as far away as Alabama.

Glenn and Donna Misenheimer trekked up from Albemarle to shop — a trip Donna has been planning for a while. She said she prefers to shop local when she can.

“I just like the small stores — unique stores,” she said.

The couple hit up shops along North and South Main streets, looking for deals. Glenn said they chose to come to Salisbury because it has a more vibrant downtown.

“We knew they had a little more variety,” Donna said.

Over recent years, shop owners said they’ve seen downtown grow and take off. Humble said she wanted to express thanks to Downtown Salisbury, Inc. for continually working to grow and improve the neighborhood.