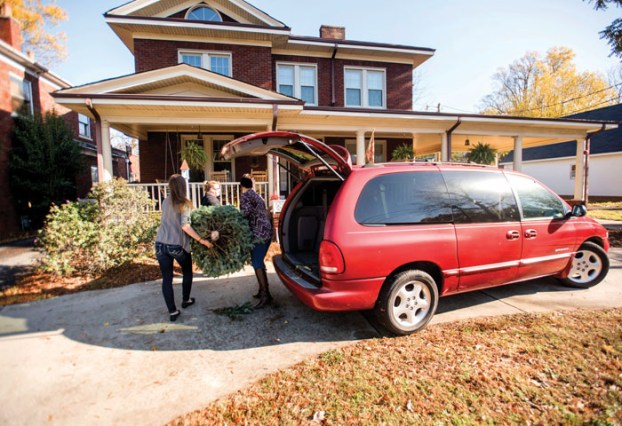 JON C. LAKEY / SALISBURY POST The Christmas tree for the house was unloaded after a short trip from the grocery store. Capstone Recovery had listed a need for a van to help with travel of the clients moving between classes, jobs and errands. Their request was filled with a 2000 Dodge Caravan by a couple who donated the vehicle to fill the need. Wednesday, November 22, 2017, in Salisbury, N.C.

Who needs your help

SALISBURY — The Bible verse that Capstone Recovery Center Executive Director Miriam Ramirez holds close to her heart is one that says to ask God for your needs and it will be given. Ramirez believed in 2015 that the center’s long-desired prayers for a van would be fulfilled.

In December 2015, Ramirez’s prayers were answered by Gail and Jerry Overcash. The China Grove couple saw the Sharing the Season listing in the Salisbury Post and called the center.

Capstone Recovery Center is a Christian-based transitional facility in Salisbury for those working to overcome addiction and re-enter society. The Sharing the Season list seeks to inquire with as many local nonprofits and human service organizations as possible who might have needs.

No request is too small and whether an organization needs office supplies, monetary donations or a van, it’s placed on the list.

Ramirez received a telephone call from Gail Overcash who said she’d seen the list in the newspaper and knew they needed a car. Overcash told Ramirez she and her husband had just purchased a new vehicle and wanted to give their 2000 Dodge Caravan to someone instead of trade it.

“She said, ‘I saw you guys need a car. Do you still need it?’ I said, ‘Yes, we do,’ ” Ramirez recalled the conversation.

Ramirez said she remembered that Jerry Overcash had not been feeling well so she and her husband, Oscar, traveled to take a look at the van.

“My husband, he always wanted to help somebody,” she said of Jerry.

Gail was familiar with the organization because her church, First Baptist, had sponsored a room there. So she told Jerry there was someone who could use the van.

The Overcashes turned over the van, but Jerry forgot to sign some paperwork so they were contacted by Miriam in January. Jerry signed the paperwork and a week later he died.

“This is just the type of person he was. He wanted to do and give to someone and he didn’t want something back,” Gail said of her husband.

She thinks everyone should read the Sharing the Season list because there may be a need they can fulfill.

As to giving away a car, Gail said, “most people want to sell stuff and that’s not always the way.”

Ramirez believes receiving the van from the list was truly by divine design. They had been driving the women around in her car, sometimes making more than one trip. The women would need to attend appointments, go to the grocery store or apply for jobs.

She then was able to upgrade her Kia to a larger vehicle, a Honda Pilot, but it still wasn’t always big enough to take the women to where they all needed to go. So Ramirez placed the car on her list.

Ramirez encourages anyone to “wish big” and “never underestimate what God can do.”

Ramirez said it was because of Jerry Overcash’s last act of kindness that they were able to have a van.

The Sharing the Season wish list is an opportunity for others to give back at a time when many throughout the nation are inspired by the one-day global giving movement of Giving Tuesday.

Kannapolis holds Christmas Tree Lighting and Festival of the Lights

KANNAPOLIS — The Kannapolis annual lighting of the Christmas tree in Village Park and the Festival of the Lights were... read more