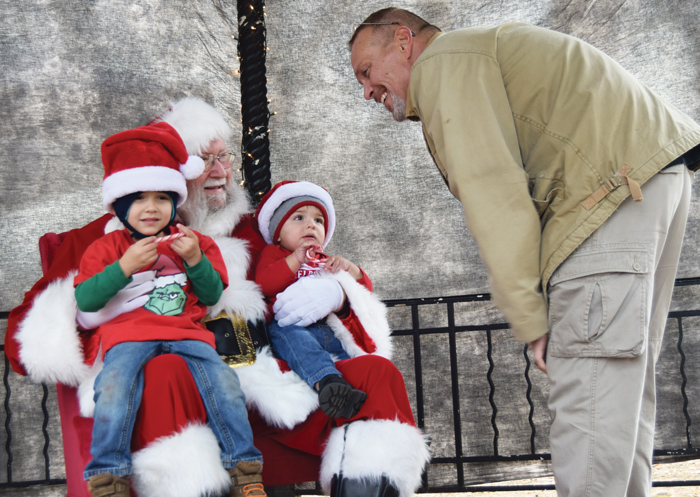 Chuck McNeil, right, leans in to talk to sons Wyatt and Liam as they sit on Santa's lap. Rebecca Rider/Salisbury Post

SALISBURY — This year, the Grinch didn’t have to wait until Christmas Day for his heart to grow three sizes larger. The beloved character spent Saturday morning greeting families, hugging children and posing for pictures in Bell Tower Park at the corner of Jackson and West Innes streets.

The Grinch was joined by the man in red himself, Santa Claus. The annual event and photo opportunity attracted crowds of people, and the line to talk to Santa stretched from his perch in the gazebo to wrap around the bell tower.

“This is a chance for families from all walks of life to come together as a community and do something fun,” she said.

Rice estimated that by the end of the day, at least 500 people would stop by the bell tower to snag a photo with father Christmas. The grounds teemed with people of all ages, from toddlers to teens to grandparents — all just as excited to get their picture taken, sip hot chocolate or piece together an ornament.

For Rice, that was the heart of the event.

“You see so many people. …There’s no barrier keeping us separate as a community here,” she said.

And the event attracted people from out of town, as well, with families driving in from Statesville or stopping by from out of state.

Rames Traboulsi is from Georgia, but he and his kids were in Salisbury visiting family, and decided to check out the event before they headed home.

Traboulsi was heading back home today, but stopped by and said he liked that it was a community tradition.

Elizabeth Gill was there with 2-year-old daughters Anna and Ava Gill. The family is local, but Gill said it was the first time they’d attended the event. And she learned something surprising about her daughters.

“They’re scared of Santa but they love the Grinch and they love gluing,” she said, laughing.

The two commanded the craft table, wielding glue sticks and stickers to create their own unique Christmas ornaments.

But other children were eager to talk to Santa. Micky Sanchez walked up and handed the big man his Christmas list: a Lego train, shoes and a coat.

“I made him draw a picture with all the things he wanted,” his mother said.

For Rice and Downtown Salisbury, the event was part of a busy holiday weekend. Holiday Night Out kicked things off Friday evening, with Santa and the Grinch and Small Business Saturday wrapping things up. The event also offered free horse and carriage rides for its duration.

Rice said she hoped those attending the bell tower event would take the time to check out the rest of downtown, as well.

“We’ve got tons of people, hundreds of people here, so it’s a good opportunity to talk about shopping small, local,” she said.

The event was free and open to the public. Photos were taken by photographer Sean Meyers, and hot chocolate was provided by Mean Mug Coffee.