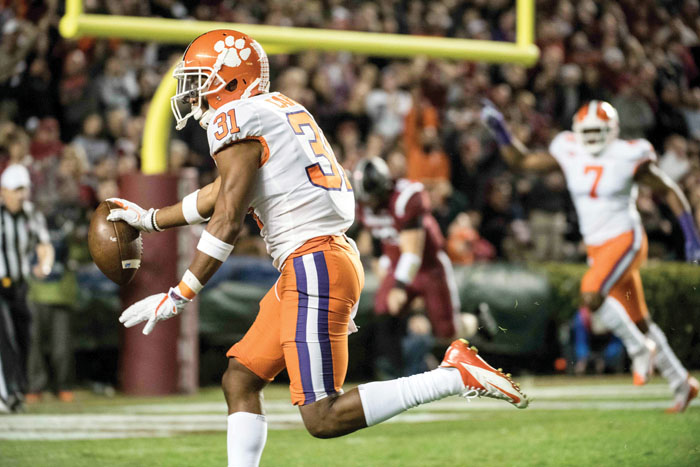 Clemson cornerback Ryan Carter (31) scores a touchdown after intercepting a pass against South Carolina during the first half of an NCAA college football game Saturday, Nov. 25, 2017, in Columbia, S.C. (AP Photo/Sean Rayford)

COLUMBIA, S.C. (AP) — Kelly Bryant threw two touchdowns to Hunter Renfrow and No. 4 Clemson kept on track for a third straight trip to the College Football Playoff with a 34-10 victory over rival South Carolina on Saturday night.

The Tigers (11-1, No. 3 College Football Playoff) won their fourth straight game in the Palmetto State’s most cared-about sporting event, tying their second-longest run of dominance in the series.

The win was the 100th in Clemson coach Dabo Swinney’s career. And combined with the CFP’s top teams — Alabama and Miami — losing this weekend, the Tigers solidified their position among the top four heading into the Atlantic Coast Conference title game next week.

The Tigers entered wary of a rejuvenated South Carolina (8-4, No. 24 CFP), which finished second in the Southeastern Conference East and had its most victories in a season in four years. But Clemson’s defense bottled up the Gamecocks and quarterback Jake Bentley for a second consecutive season.

South Carolina managed just 99 yards in the first half and 207 for the game, its lowest total this season.

Renfrow, whose 2-yard TD catch with a second left gave Clemson a 35-31 win over Alabama in the national title game in January, scored on passes of 4 and 61 yards to put things out of reach. Renfrow had his third career two-TD game, the other two coming in Clemson’s national championship appearances against Alabama the previous two years.

Clemson: The Tigers put on another big show away from home, adding to earlier wins at Louisville (47-21), Virginia Tech (31-17) and North Carolina State (38-31) this season. The ability to win on the road should serve them well playing away from home in the ACC title game and the College Football Playoff.

South Carolina: The Gamecocks have made big strides this season, but are still no match for Clemson’s dominant program which has outscored Will Muschamp’s team 90-17 in his two years on the job.

Clemson coach Dabo Swinney was called for an unsportsmanlike penalty after apparently yelling at officials a bit too often with language that was a little too salty. The penalty came after Clemson’s Hunter Renfrow caught a 4-yard touchdown pass in the second quarter. Swinney was upset that fans near the end zone were tossing water bottles and debris on the field.

Clemson will play Miami in the Atlantic Coast Conference championship game on Dec. 2.

South Carolina awaits its bowl destination to be announced Dec. 3.