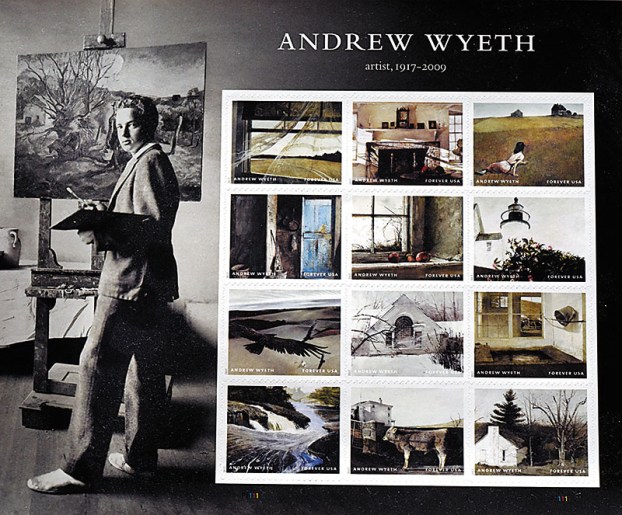 A sheet of Andrew Wyeth postage stamps with a photo of him on the left as a young man. photo by Wayne Hinshaw, for the Salisbury Post

While purchasing postage stamps at the Salisbury Post office, I noticed a display of colorful commemorative stamps including a sheet of stamps with Andrew Wyeth’s paintings.

I recalled visiting the National Gallery of Art in Washington, D.C., in the summer of 1987 to see the “American Drawings and Watercolors of Twentieth Century: Andrew Wyeth, the Helga Pictures.” I realized that it was a real privilege to get to see the original artwork of one of America’s best known artists. I have always enjoyed studying his simple approach to his subjects and his great, but straightforward, vision.

The show had 140 works on view, with 240 pencil drawings and watercolors by Wyeth that he produced between 1971 and 1985. The pencil study drawings and finished works were of Wyeth’s neighbor, Helga Testorf.

To me, it was amazing that he had kept all of his pencil attempts at capturing his subject. I could study how he first came up with an idea, drew it on paper, trashed the idea, started over again and again. When it was perfected, to his liking, he would then add the colors and details. Apparently, he never trashed any of his failed attempts.

Of course, all of Andrew Wyeth’s “failed” attempts were valuable because he drew them.

At the time, the “Helga Pictures” were a scandalous subject for the media since Wyeth had secretly created more than 240 works of Helga in various settings and poses including many nude works over a 15-year period. The 32-year-old Prussian-born, reddish-blond haired Helga had never modeled before agreeing to be Wyeth’s subject for the 15-year project.

Wyeth claimed that he could have never completed the project, with people looking over his shoulder as he painted, if everyone had known about the paintings.

Later, his wife, Betsy, acknowledged that she was aware of the project. In an interview after Wyeth’s death in 2009, Helga revealed that Wyeth’s plan was that the works were not to be released until after this death, but word got out in 1985.

Wyeth’s most famous painting is titled “Christina’s World.” It is a painting of Christina Olson, another neighbor in Cushing, Maine, crawling on the ground across a field toward her house. She suffered from infantile paralysis and refused to use a wheelchair, preferring to crawl. That painting is part of the postage stamp collection.

Christina’s frail legs and twisted body, with her hair blowing in the breeze, draws you into the pain she must be suffering while dragging her body across the field.

You cannot see her face but the painting captures her determination and her personal strength. “Christina’s World” was painted in 1948. In Wyeth’s classic style, he used  shades of brown and gray color. Critics claimed that his paintings were colorless, but his works had a large following for the middle class Americans who could associate with his vision.

In a taped interview, Wyeth once explained that he liked a simple vision, like walking along a path and seeing a rusty barbed wire fence, over a snow covered field and a small swatch of horse hair hanging on a barb of the wire. He describes a subject that would attract him.

He loved subjects from nature and settings in towns in Maine and Pennsylvania.

He was born in Pennsylvania and his home and studio were on the coast of Maine.

He was fascinated with bright “open windows” capturing the natural light in his paintings. The postage stamp collection has examples of his favorite subjects, but no paintings of Helga are included on the stamps.

Meet your neighbor at the turquoise table

By Ann C. Wayne news@salisburypost.com CONCORD — In today’s world, people are so busy with work, meetings and their own agendas... read more