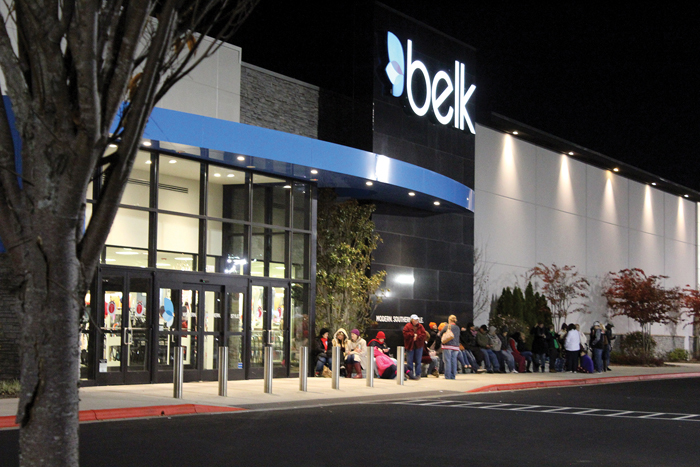 SALISBURY – As stores opened on Friday, crowds of holiday shoppers amassed in a startlingly slow trickle.

Dick’s Sporting Goods opened at 5 a.m. with fewer shoppers than employees. For stores like Belk, Ulta and Kohl’s that opened at 6 a.m., lines were comparably small.

Belk seemed to draw the biggest crowd before opening, offering shoppers scratch-off cards for dollars off of their purchases.

The few souls braving the cold, Black Friday veterans, said the decrease in early morning shoppers was likely due to increasingly early sales.

“A lot of people probably shopped half the night yesterday,” said Judy Sifford, seated and waiting for Belk to open alongside her daughter, Danielle Wright. “They’re probably all exhausted and asleep right now.”

In front of Sifford was Christine Hobbs with family members Autumn and Dolly. The trio had been waiting for about an hour before the store opened.

“There weren’t very many people out here,” she said. “We were very shocked. … It’s much smaller this year.”

Mid-morning saw an increase in retail traffic, though store parking lots across the city still had many spots to be filled.

Nationally, the lag in Black Friday shopping may come from more than just earlier in-store sales. Online sales, specifically those originating from mobile devices, are on the rise.

These numbers complement results from a recent High Point University poll. Of North Carolinians surveyed, only 41 percent planned to shop at brick-and-mortar stores.

Seven percent of respondents had yet to make plans.

“You would think (the stores) … would have done something special to bring more people in today,” said Sifford. She and her daughter had shopped the day prior and said that crowds were out in force.

“(The store) … gave out cards,” Sifford said. “You couldn’t butt in line or nothing. They had it all roped off. Today they don’t care.”

The Hobbs family had refrained from shopping Thursday evening, though they do shop on Black Friday annually.

Christine Hobbs said she had different priorities for the holiday itself:

“I’d rather spend the time with my family.”