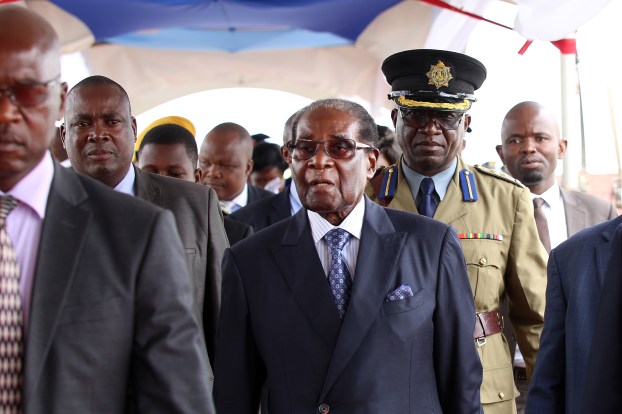 Robert Mugabe, president of Zimbabwe, center, arrives for a student graduation ceremony at Zimbabwe Open University in Harare, Zimbabwe, on Friday. Mugabe has been pressured to resign. Bloomberg photo by Godfrey Marawanyika The dismantling of the Mugabe regime has engendered a welcomed respite for Zimbabwe. This is particularly the case for the current oldest generation of Zimbabweans who share three common experiences: British colonialism, the ruthless regime of Prime Minister Ian Smith and, more recently, the equally ruthless regime of President Robert Mugabe.

British colonization of the territory began in the 1850s and included the explorations of David Livingstone — whose colossal statue overlooks Victoria Falls, which he named honoring Queen Victoria in 1855, and for whom Livingstone College is so named.

Then came Cecil Rhodes, who paved the way for the takeover of the resource-rich territory by the British. He founded Salisbury (now Harare, the capital of Zimbabwe) and established Southern Rhodesia in 1895 — which derived from his name — as a self-governing British colony. His ambition had been to acquire all of Africa — from Cairo to the Cape of Good Hope — in the name of the British Crown.

The second common experience involved Ian Smith, the first native-born prime minister of the British colony. Throughout his tenure, 1964-1979, Smith advocated white supremacy and denied civil liberties to the blacks. So powerful was Smith that he declared Southern Rhodesian independence and withdrew from the British Commonwealth. As it so happened, black retaliatory forces such as the Zimbabwean African National Union (ZANU) rose up against the Smith regime and, the United Nations imposed economic sanctions on the country as well.

Enter Robert Mugabe — the third common experience — a key figure among the black retaliatory forces and a negotiator in the creation of a more democratic Zimbabwe in the 1979 Lancaster House Agreement. Accordingly, the people reclaimed the original name, Zimbabwe, “House of Stone,” named by the local Shona people over 800 years earlier, as well as the name of the capital, Harare. In the interim, Mugabe assumed leadership of the newly independent nation, was elected prime minister in 1985, and then president in 1987.

But the man who was believed to have been the nation’s liberator did not produce the results most Zimbabweans had expected. The once highly-lauded educational system suffered. The infrastructure never quite got off the ground; poorly constructed and maintained transportation systems and obsolete utility and communications grids. Lest one forgets, the nation failed to deal with the HIV-AIDS epidemic and, failed to hold fair and open elections. Yet, as recent as the year 2000, Mugabe was viewed favorably by many for seizing white-owned commercial farms, a policy that resonates with many black African nations to this day.

Nor does one dispute that Mugabe and his cronies engaged in torture and murder and lined their pockets with public money and funds extorted from individuals and businesses.

Rather, the fact is that, at such a pivotal time in history, the Zimbabwean people have — across generations — shown forth immense grace and dignity. One need only look at other nations on the African continent such as Tunisia, Nigeria, Libya and Egypt for a marked contrast in the process of regime change.

Even in their one-day protest, Zimbabweans manifested grace and dignity.

No rampage and killings. No debasing of the president. No black sacks and beheadings.

They left the removal of the president from office to the constitutionally-elected Parliament. Then, on the second day of Parliamentary deliberations, President Robert Mugabe resigned, effectively ending the impeachment proceedings against him.

After having endured so much hardship, and for so long, tomorrow will be soon enough for Zimbabweans to start rebuilding.

M.J. Simms-Maddox, Ph.D., chairs the Department of History and Political Science at Livingstone College. She visited Zimbabwe in 2000, resided among the people and toured the magnificent country. For her latest book, “Mystery in Harare,” visit http://www.novelsbymj.com.

Leonard Pitts: What does it mean to be a man?

So I guess you can take men off the endangered species list. It wasn’t that long ago we were hearing... read more