Meet your neighbor at the turquoise table 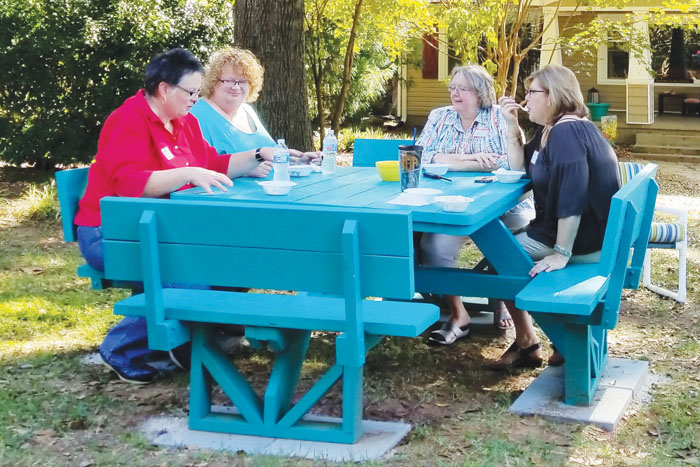 Janna Syester and Kim Jackson, housemates on Spring Street in Concord, set up a 'turquoise table' in their front yard as a way to meet their neighbors. Submitted photo

CONCORD — In today’s world, people are so busy with work, meetings and their own agendas that many don’t even know who lives next door.

But that’s not the case with Janna Syester and Kim Jackson, housemates on Spring Street. They recently moved to a new neighborhood and began praying for their neighbors and were hoping to meet some of them.

Syester is an occupational therapist for Advanced Home Care. Jackson is the director of Elder Orphan Care, a mission organization for the elderly in Romania. Syester is also on the group’s board of directors.

Both women travel frequently and don’t have much time for socializing in the neighborhood.

On one of their recent trips, a magazine article about a turquoise table caught Jackson’s eye. It was about the book “The Turquoise Table.” Author Kristin Schell shares the story of how she put an ordinary picnic table in her front yard, painted it turquoise and began inviting friends and neighbors to join her. What happened was amazing; her community was transformed.

Jackson watched a video on Schell’s website and knew that she was a Christian when she made the statement, “Love your neighbor as yourself.” She shared stories of how the turquoise table opened up a whole new world with her neighbors and how she made so many friends.

Jackson was sharing all of this while Syester was driving. Jackson said, “I knew that without even looking at Janna, her next statement would be, ‘We need a turquoise table.’”

They were determined to be “front yard people.”

The women began searching for a table. With her background in occupational therapy, Syester wanted a picnic table that had a back and that you did not have to climb over to sit on the bench. They found plans online.

Bobby Kluttz, the father of one of Jackson’s co-workers, agreed to build the table in his shop in Salisbury at Woodland Furniture and Crafts. Syester went to his shop to paint the table, and Kluttz delivered the table to Syester and Jackson’s front yard a few days later. The actual paint color is Sherwin Williams’ Nifty Turquoise.

Jackson was in Romania on a mission trip when the table was delivered. Syester was supervising the delivery as a neighbor walked by with her dog.

“What’s this table about?” Sherry Allman asked. Syester shared the story of “The Turquoise Table” book as Allman listened and anticipated coming back for a cup of coffee.

Someone made negative comments about the table idea not working before it was ever delivered, Jackson said, but she and Syester did not let this suppress their excitement.

When Jackson opened the blinds one morning, she spotted a potted plant on the table with a note that was signed “a neighbor that is looking forward to time around the table.” The card read, “May it make burdens lighter; laughter louder; joys deeper and friendships stronger. Blessings on you — friends — for having the vision.”

The first “turquoise table event” was in September. Jackson and Syester and some neighbors made ice cream. They hung invitations on 20 doors in the neighborhood and were uncertain about how many people would come. They were blown away when 26 neighbors showed up.

Elaine was one of them. She had noticed that the turquoise table was close to the curb, and every time she drove by she thought the color was  unusual. She had seen a post on Facebook about a turquoise table and wondered if it was connected to the one in her neighborhood. Three or four days later, she received the invitation from Syester and Jackson. It was the confirmation she needed to connect the dots and join in on the fun.

There are turquoise tables in almost every state in the U.S. and in six countries. Many are registered on private Facebook pages and friends share ideas with other turquoise table owners.

Schell did not set out to start a “turquoise table” movement with her book. She was just desperate for a way to slow down and connect. She has products in Tuesday Morning stores and at Dayspring. The “Turquoise Table” has led to a movement of “Front Yard People.”

“People of different stripes and different backgrounds are in the neighborhood,” Jackson said. “It’s more than what happens when we have events.”

The connections have a domino effect. Some have become Facebook friends. They are discovering each other’s hobbies and talents too.

And they even look after each other’s homes. Sherry talked about how she is taking care of Martha’s plants while she is in rehab and feeding Jody’s cats while she is at the beach.

Jackson and Syester have discovered that some elderly neighbors live close by. This is close to their hearts because of their involvement with Elder Orphan Care and the fact that the organization is planning to expand in the U.S.

Jackson took some homemade potato soup to Sherry recently, which is a big deal because Jackson professes to be culinarily impaired. Syester loves to cook, but Jackson is the socialite. Her hospitality is displayed through planning and hosting.

Conversations ignited throughout the Sunday evening in November during the second “Turquoise Table” gathering, and a web of connections was discovered. Jackson was Syester’s dorm mom when she was 17 and others made connections from high school. Neighbors who may have never met each other were sitting around a table enjoying homemade chili and roasting s’mores around a fire pit.

When Jackson and Syester were asked if they are on a mission to “better love their neighbors,” Derrick and Sherry jumped in and answered for them. “We think Kim and Janna have succeeded.” Derrick added a little humor and said, “Beginning next week, we are going to give out sample bottles of turquoise paint at Lowe’s.”

Elaine shared from the depths of her heart. “We had another enjoyable evening with neighbors that have become friends and we are still getting to know some other neighbors. I just love the opportunities that have opened up for all of us because of one turquoise table and two awesome ladies. You can’t even imagine the blessing you are to me, and I hope it will open the door for all of us to be blessings to each other, to pass on the kindness.”

Sherry put in her 2 cents worth too. “It was such a fun evening.  The Turquoise Table has given a different flavor to our neighborhood.  We love it.  To anyone thinking about repeating this grand idea in your neighborhood, do it. What a blessing!”

Tim, who came early and built the fire, also stayed afterward and helped take tables down. “Thank you for doing this; I love living on this street,” he said

If you want to meet your neighbors around a turquoise table in your front yard, choose your design and consider contacting Bobby Kluttz of Woodland Furniture and Crafts at 704-798-7300. You may start a “turquoise table” movement in your own community.