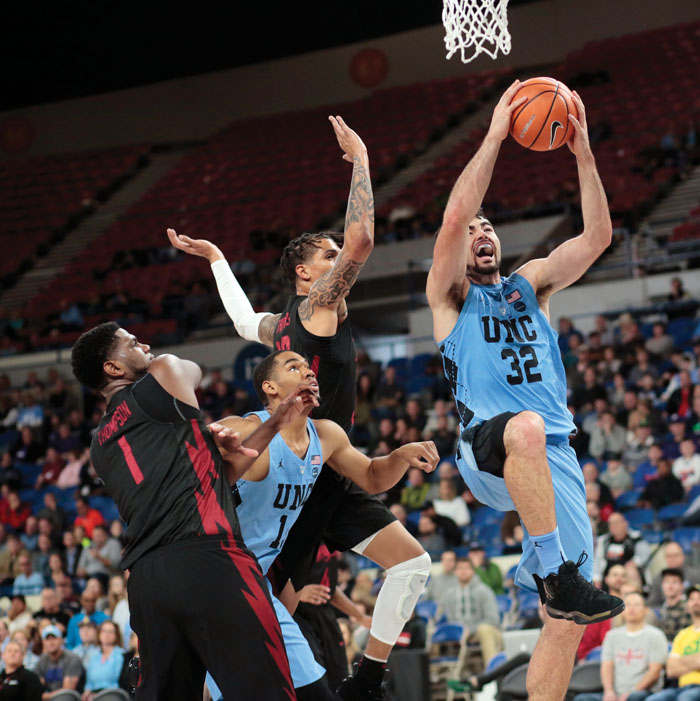 “The young man is really, really intelligent and he’s finally starting to play basketball with his brain involved too,” the North Carolina coach said. “Except for his turnovers.”

Maye, who committed five turnovers, had career-highs with 28 points and 16 rebounds, Kenny Williams had 16 of his 19 points in the second half, and No. 9 North Carolina slowed down high-scoring Arkansas beating the Razorbacks 87-68 on Friday in the semifinals of the PK80 Invitational.

The Tar Heels were smothering on the defensive end, holding the Razorbacks under 80 points for the first time this season. The Razorbacks shot just 32 percent in the first half and were dominated on the boards getting outrebounded 46-30.

Maye carried the Tar Heels offensively for the first 25 minutes before Williams and Joel Berry II got going. Maye made 11 of 16 shots and 11 of his rebounds came at the defensive end. Berry was just 3-of-12 shooting, but he made 7 of 8 free throws. Williams took just three shots in the first half, but was 6-of-9 shooting in the second half.

It all added up to another impressive performance by North Carolina and specifically Maye. The Tar Heels (5-0) will face either Michigan State or UConn in the “Victory Bracket” championship game on Sunday night.

Jaylen Barford led Arkansas (4-1) with 21 points and C.J. Jones added 12 off the bench. Daniel Gafford, who was averaging nearly 16 points per game, was hampered by foul trouble and finished with just five points. The Razorbacks also lost second-leading scorer Daryl Macon to a leg injury midway through the second half.

Arkansas had a couple of second-half rallies that fell short. The first came after Macon had to be helped off the court due to his leg injury suffered on a baseline drive. Barford scored five straight points and layups from Dustin Thomas and Gafford pulled the Razorbacks within 55-48 with 13:01 left.

Maye tipped in a miss and the Tar Heels scored nine of the next 13 points to build the lead back to 14 on Pinson’s layup with 9:20 remaining.

The lead remained there until consecutive 3s by Jones. Maye missed in the lane and a three-point play by Barford pulled the Razorbacks within 74-68 with 3:32 remaining. It was the final points for Arkansas. Berry hit two free throws and an ofwfensive foul on Arkansas led to Pinson’s thundering one-handed dunk and a 10-point lead with less than 3 minutes left.

North Carolina: The Tar Heels will face either Michigan State or UConn on Sunday.