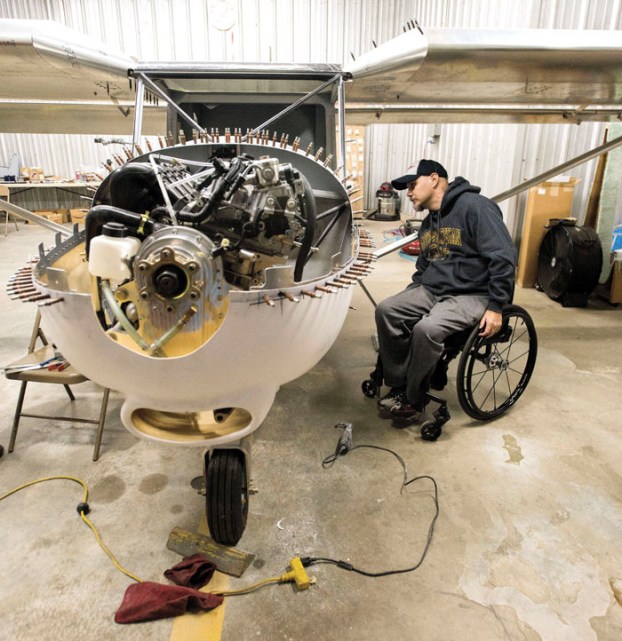 Thanks, guys: Aviation enthusiasts are building plane for disabled pilot, who has even bigger plans

SALISBURY — For almost a year now, John H. Robinson has driven from Charlotte on Tuesday and Thursday nights to meet with a group of experimental aircraft pilots who have become some of his best friends.

“I’m just worried,” Robinson says. “How am I ever going to thank these guys?”

Because of a spinal cord injury he suffered in a 1996 automobile accident, Robinson relies on a wheelchair. But his paralysis did not stop him from earning his sport pilot’s license in June 2015 thanks to a six-week training program at Purdue University.

A Navy veteran of Desert Storm, the 47-year-old Robinson calls the flying achievement “the best thing I’ve done in or out of my wheelchair.”

Now the core group of five men he sees every week at Mid-Carolina Regional Airport in Salisbury are helping him with another dream. They’re building him a specially adapted Zenith CH 750 Cruzer, which will become the backbone of Robinson’s new nonprofit venture, Aviate for All.

Robinson’s goal is simple: He wants Aviate for All to provide more general aviation opportunities for people with physical disabilities. He envisions being able to offer flight training, a ground school, flying days and an aircraft for private hire to disabled pilots.

But first his two-seater Zenith aircraft has to be built, and providing the manpower have been five members of Experimental Aircraft Association Chapter 1083: Lewis Brown and Gary Koontz, both of Davidson County; Tom Neal of Gold Hill; Lance Berrier of Mint Hill; and Louie Moore of Mount Pleasant.

“They know what needs to be done,” Robinson says. “It’s just amazing.”

They gather twice a week in Moore’s hangar at the northern end of the airport. Once Aviate for All is up and running, Robinson plans to lease this same hangar from Moore.

The only Tuesdays the men miss are holidays such as today and the once-a-month meetings of the EAA chapter in the hangar nearby.

The men assembled the wings and tail section first — elements Robinson had purchased from Zenith Aircraft, based in Mexico, Missouri. The fuselage kit came next, and Zenith donated that part of the plane.

Whirlwind Propellers has provided the prop at a 70 percent discount; Viking Aircraft Engines donated the engine and all its accessories.

The CH 750 Cruzer has an engine similar to what you would find in a Honda Fit car — a 130-horsepower motor that will get up and go.

“As smooth as a sewing machine,” says Moore, a retired machinist.

The experimental aircraft will weigh roughly 750 pounds when finished, but that’s not counting the final blue-and-white vinyl wrap, passengers and fuel in two 30-gallon tanks. The vinyl wrap has been donated, but Robinson is trying to find someone who can do the wrap.

Zenith engineers have been testing the special controls in a prototype, and the builders here are waiting on their arrival so they can go about the task of installation. Instead of one set of hand controls and one set of foot controls, Robinson’s plane will depend on two sets of hand controls, much like his specially adapted vehicle.

The seats also have to go in. The plane is low enough to the ground that the 47-year-old Robinson probably will be able to pull himself into the pilot’s seat.

“It’s going to be interesting to see John flying this thing,” Neal says.

The build team and Robinson are hoping to have the plane completed by spring or summer. Several of the guys have built their own Zeniths in the past, so they have a lot of experience.

When the plane is finished, the Federal Aviation Administration will send an inspector. The EAA chapter’s and Zenith Aircraft’s endeavor to build the specially adapted plane have been written up in some national aviation magazines, the men say.

Robinson says he definitely will fly with an instructor at first, reminding himself he has only 40 hours of experience in the air.

Brown says 90 percent of what the men are doing is by the book — that is, they are following the thick manual of instructions provided by Zenith Aircraft. An average person with medium skills could assemble this kind of plane, Brown adds, as long as he also would look to knowledgeable people for assistance.

“We have to be a little crazy, spending this much time building an airplane,” Brown says. “But for goodness sakes, it’s better than chasing a golf ball.”

Robinson estimates he’ll have a personal investment of $45,000 to $50,000 in the plane, and he has refinanced his house to make things work. Acting on his accountant’s advice, Robinson plans to lease the completed plane back to Aviate for All.

“In aviation, everything is crazy,” Robinson says of the expenses. “We’ve had a lot of people step up.”

Robinson served in the Navy from 1988 to 1992. He also has been an officer with the Federal Bureau of Prisons. At present, he’s a part-time mental health therapist. He is considered a C7 quadriplegic, the result of his accident when he was 25 and living in New Jersey.

He still has good movement in his arms, which leads many people to think he is a paraplegic. But his paralysis has left him with limited dexterity in his hands. The long recovery and rehabilitation and adapting to a new kind of life derailed Robinson’s long-held ambition to fly.

He moved from New Jersey to Charlotte 12 years ago to be closer to his parents.

Through Able Flight, based in Chapel Hill and headed by Charles Stites, Robinson won a full scholarship in the spring of 2015 to take six weeks of flight training at Purdue University in Lafayette, Indiana.

“One of my friends went through it two years before me, so I applied,” Robinson says.

The process included a lengthy application, an interview by telephone and an interview in person. Robinson was all in from the start, and he stresses the aspiration to fly can’t be only a bucket-list item to check off and go on to something else.

The training experience at Purdue was scary at times. Besides concentrating on taking off, flying and landing, Robinson also had to be in contact with a control tower.

“It was pretty hard,” he says. “… There was so much multi-tasking going on, and so much to do. It’s hair-raising.”

He was part of a four-person class that spring in Indiana.

When he was through with his training at Purdue, Robinson realized quickly he was a licensed pilot with essentially nothing to fly. He says the closest plane for hire available for a pilot such as himself is in Marietta, Ga.

No American companies were building planes designed for people with physical disabilities. The plane Robinson had trained on was an Italian-made Sky Arrow. The owner of Zenith Aircraft, a strong supporter of Able Flight, became interested in Robinson and his idea for Aviate for All.

Zenith helped to fashion a press release that was distributed to EAA chapters, looking for someone who might want to build a Zenith plane for Robinson.

“These guys showed the most enthusiasm,” Robinson says. “That’s why I’m driving up here.”

Brown, a onetime Nissan service manager and independent contractor, waited until his mid-30s to become a pilot; Neal, who was a veterinarian for the state of North Carolina, didn’t earn his pilot’s license until he was 70.

“It keeps you from getting older,” Neal says of flying.

It’s not unusual for Brown and Neal to invite their wives and fly their own planes to small airports or landing strips where some good restaurants are close by. They flew recently to Martinsville, Virginia, and also like to take trips to places such as Carthage and Bennettsville, South Carolina.

The internet has opened a whole new world of help for experimental aircraft builders. Pilots who have assembled Zenith Aircraft are online, offering tips and insights.

The guys spend about two hours on the plane when they have their Tuesday and Thursday night sessions. And they usually talk before they leave about what they have to tackle the next time.

Somewhere back inside the fuselage, the guys who have worked in building this plane are going to sign their names on a panel. No one will be able to see those autographs, but the men will know they are there.

So will John Robinson. It seems only fitting. In the years to come, every time he flies the plane, Lewis, Louie, Tom, Gary and Lance will be up there with him.

This photograph, taken from North Church Street, appeared in the Salisbury Post Feb. 20, 1993, and it shows heavy equipment... read more