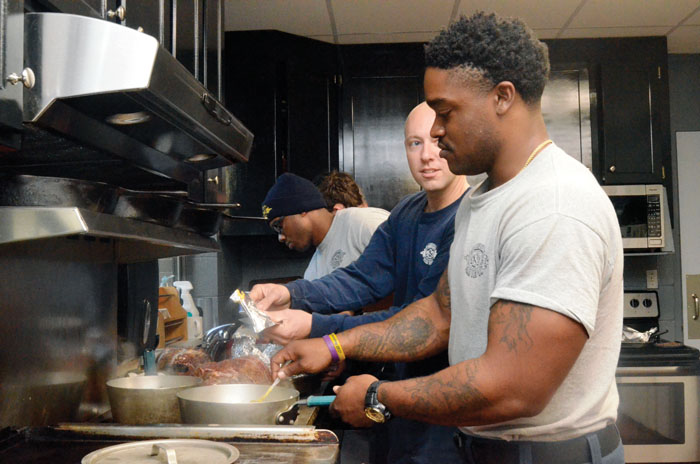 SALISBURY — On Thanksgiving Day, when families across Rowan County are preparing for a meal together, the firefighters at Salisbury’s Station 1 are answering a medical call.

It’s the first of a few calls they’ll respond to on what’s a holiday for most people but another day on duty for firefighters.

Many of the firefighters working Thursday said this Thanksgiving was atypical for a holiday at the station. Fire departments usually get multiple calls for overcooked food or turkey fires, they said.

A call went out about noon of a possible fire at a local apartment complex.

In less time than it took to travel from the East Innes Street station to Lash Drive, a 911 dispatcher chimed in on the scanner to reduce the response to routine — because it was, indeed, for overcooked food.

Kepley, who has been with the department 30 years, can just about predict how many of the calls turn out, just as many other experienced firefighters can. Most of the firefighters agreed that it is either completely busy on a holiday or pretty light. On Thursday, calls were few and far between.

When they aren’t responding to an emergency call, the firefighters watch television (football), stay in contact with family by cellphone, restock supplies, or some even get a little shut-eye.

The firefighters at times swapped stories of holidays past or memorable calls they have had, and of days gone by.

But on the agenda Thursday was prepping the Thanksgiving meal in between the calls. It was a meal that was shared with their families, a few EMS paramedics and their families, and those from Fire Stations 2 and 3.

Those at Station 4 had their own gathering in the works.

“It’s tough in some aspects. It’s tough leaving them behind,” firefighter Jeremy Cline said, looking over at his wife.

He said although the holidays apart are difficult, his wife, who is a former Charlotte paramedic, knows about working on holidays. Cline said at a time when many emergency workers are separated from their families, they still get to spend time with their “other family.”

In previous years, the city’s firefighters all gathered at their own stations. This year, they decided to expand and invite those from other stations to the East Innes Street station. Members of the Salisbury Fire Department prepared a Thanksgiving meal for them and their families since they had to work. From left are Derry Brown, Battalion Chief Chris Kepley, Jeremy Cline and Anthony Imes. Shavonne Walker/Salisbury Post

Cline said it was a great opportunity to dine with firefighters and their families and gather everyone to celebrate, since Kepley is retiring at the end of the year.

“You spend time with your ‘different’ family. It forces you to be a little creative with scheduling,” she said.

She was joined by her husband, Jerry, who is an assistant chief at Ellis Cross Country Fire Department.

Although working on Thanksgiving means being away from family, it’s good to have them visit, said firefighter Jimmy Arnold.

Other than breaking bread around the fire station dinner table and taking a break from dinner preparation to respond to a house fire, it’s still Thanksgiving, complete with all the trimmings, a football game and a televised holiday parade.