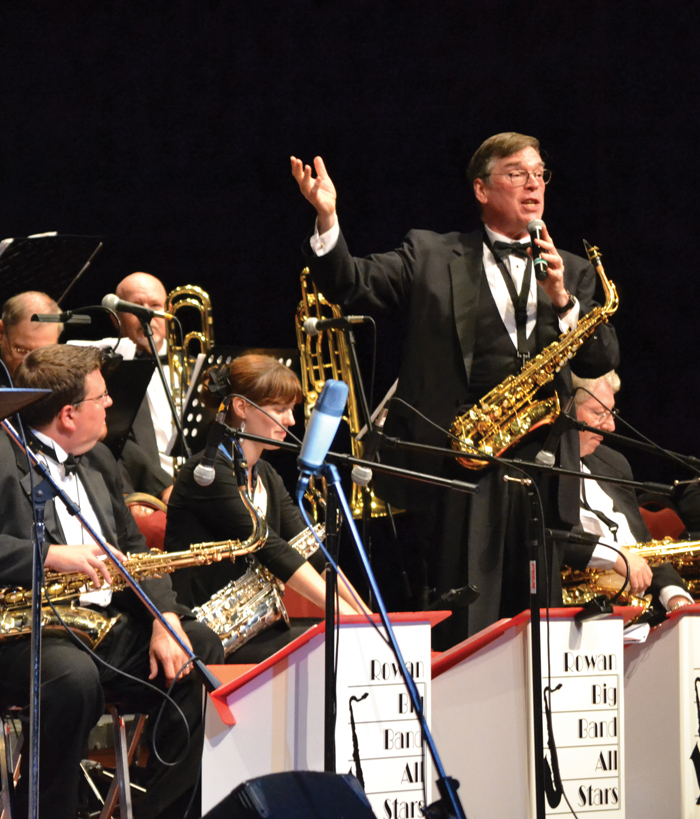 Ron Turbyfill and the Rowan Big Band All Stars

Local Big Band enthusiasts are in for a treat again this year when the Landis-based Rowan Big Band returns to Lee Street theatre Dec. 15.

The 18-piece band only makes about three or four public appearances per year, playing at music festivals and outdoor venues such as Birkdale Village, and fills in the rest of the year with a sprinkling of weddings and other private gatherings.

Their most recent appearance was at the Rowan Blues and Jazz Festival in October and in December you’ll get to see this huge band in full performance mode, decked out in the traditional big band style of tuxedos and evening wear, playing the music that can only be played by a big band.

“Our performance schedule is just about right where I want to be,” says bandleader Dr. Ron Turbyfill while unpacking his alto saxophone at a recent rehearsal. “I would rather perform a few quality gigs every year, and that way we can spend our time working up the new music at rehearsals.” The members of the band donate their time and energy to practice and perform, so Turbyfill has to maintain a delicate balance between hard work and time off for band members.

But when they do perform together, it’s a beautiful thing. This year’s playlist includes a host of favorite Christmas songs played with the characteristic swing that makes this form of music toe-tapping special… Songs like “White Christmas,” “Have Yourself A Merry Little Christmas,” “Let It Snow” and Glenn Miller’s classic arrangement of “Silent Night.”

There will also be a few newer arrangements of old favorites, such as Michael Buble’s version of “Santa Claus Is Coming To Town,” the wonderful “Santa Baby” and even a few New Year’s Eve favorites such as “What Are You Doing New Year’s Eve.” Songs made famous by bands like those led by Count Basie, Stan Kenton and Glenn Miller, and singers like Frank Sinatra, Eartha Kitt, Harry Connick, Jr. and Michael Buble.

Returning vocalists this year include Nikki Jones Bailey, Bill Bucher and Alexis Cowan. In addition, the performance will include an appearance by the new vocal group “The Moonglows,” a local six-part vocal harmony group who actually made their debut appearance as “The ‘Bury Home Singers” in the recent “’Bury Home Companion” show in August.

The Rowan Big Band “All Stars” include:

The concert is a one night only event Dec. 15. Doors open at 6:30 p.m.; concert begins at 7:30. Tickets are $20 + taxes/fees. The concert will take place at Lee Street theatre and Performing Arts Center at the Tom and Martha Smith Event Center at 329 North Lee Street, Salisbury, NC 28144. Visit www.leestreet.org or call 704-310-5507 for tickets. For more information on Rowan Big Band visit their website www.rowanbigband.com