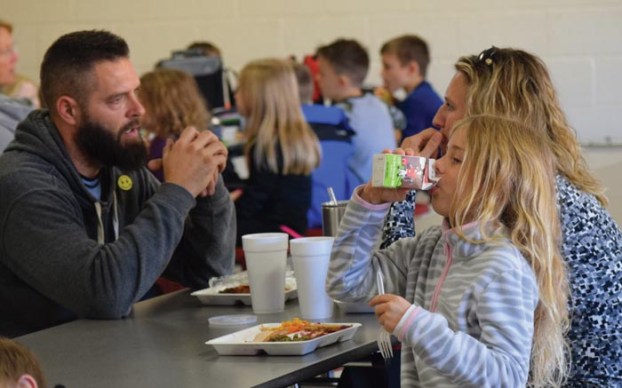 “We’re very thankful for all our parents and families and what they do for our kids,” she said.

Bostian Elementary chose to celebrate its support network by inviting parents and guardians to join students for a Thanksgiving meal the week before the holiday. According to Sigmon, more than 80 families responded.

For a small school tucked away in the far reaches of Rowan County, Bostian is chock-full of parents, volunteers and families set on weaving their own lives into that of the school. This year, there are 51 trained parent and community volunteers working with students. At a recent math night, 90 parents came out to participate with their children.

It’s a small thing that makes a huge difference. According to Sigmon, increased parent involvement is linked to student success and achievement.

“I just think it creates a good environment to learning,” she said.

Bostian’s Thanksgiving holiday lunch is a school tradition, but this year, the cafeteria staff members asked if they could extend an invitation to parents. While the cafeteria is normally dotted with several parents and families, cafeteria manager April Chandler said that attendance was thin at last year’s holiday meal.

“So we thought we’d louden it up a bit,” she said.

Sigmon sent out a message a few days before the meal, inviting parents to come eat lunch with their students. More than 80 responded that they intended to visit.

The day put Bostian in the holiday spirit, as parents and grandparents scooted close and shared turkey, sweet potatoes and cranberry cobbler. Chandler played upbeat music inside the cafeteria and in the outdoor seating area, and cafeteria workers greeted each student by name.

“It’s been like a big, upbeat, happy family time,” she said.

Parent Sabrina Basinger agreed, saying that when a school welcomes families, they become a part of a larger school family. And it’s also beneficial for her son, Wilson.

“I think it’s the best way to succeed, to be involved,” she said.

Wendy Egert works from home. She said she tries to come eat lunch with her son, Caleb, at least once a month.

“I think the school makes it easy for us,” she said.

At Bostian, the door is always open. And the school has a “warm, welcoming environment” that parents and students love. Most parents said their students are excited and eager to go to school. Sigmon said she feels that excitement is partially due to the dedication of parents.

“It’s just a great feeling when you know your kids want to come to school,” she said.

Thanks, guys: Aviation enthusiasts are building plane for disabled pilot, who has even bigger plans

SALISBURY — For almost a year now, John H. Robinson has driven from Charlotte on Tuesday and Thursday nights to meet with... read more