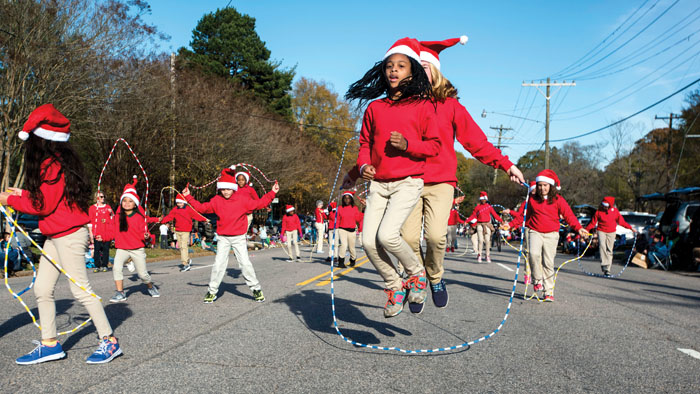 SPENCER — Spencer native Samantha Peeler has been coming to the Holiday Caravan Parade since she was 3 years old.

“I used to be in it when I was a little kid. I was in pageants, and they would put me on the float,” Peeler said Wednesday.

“At this point, it’s something to do with my kids. They enjoy it; they have a good time,” Peeler said.

In addition to letting her be with her children, Peeler said the parade also gives her a chance to see her extended family.

“In fact, from my car all the way down to the brown truck, we’re all family,” Peeler said, gesturing to a brown vehicle about 30 feet away. About 25 people sat between their two vehicles.

She said her family comes to the parade every year and sits in the same spot on Salisbury Avenue.

“To me … it’s a time with family. The ones that aren’t working, we can all come, be together, just hang out. The kids get to play; they don’t get to see each other that often. So when the Christmas parade rolls around, we know we’re all going to see each other,” Peeler said.


Some 131 floats from local businesses, schools and churches handed out candy, fliers and coupons to the hundreds of parade-goers who lined Salisbury Avenue in Spencer and Main Street in Salisbury on Wednesday.

Parade volunteer Todd Johnston said he has been helping with the parade since he was 12.

“I love watching the kids and everybody just having a great time,” Johnston said. “And my dad did it for so long.”

Johnston said that by continuing to participate in the parade, he feels like he’s honoring his late father.

“I miss him every day. Especially today,” he said. “And I know he’s looking down at us today.”

Johnston’s wife, Gail, began helping with the parade when they were married 38 years ago.

“It brings everybody together. I mean, out here, everybody is kind of jovial. And they love a parade,” Gail Johnston said.

The joy in the air was most noticeable when people on parade floats shouted “Merry Christmas!” or “Happy Holidays!” Without a beat, most onlookers excitedly returned the greeting.

Theresa Pierce and her 4-year-old grandson, Jian Parker Moscardini, wished many parade walkers a happy holiday as they paraded by and gave an excited Jian candy.

Pierce said she’s been coming for the last 30-plus years, most recently with her four grandchildren.