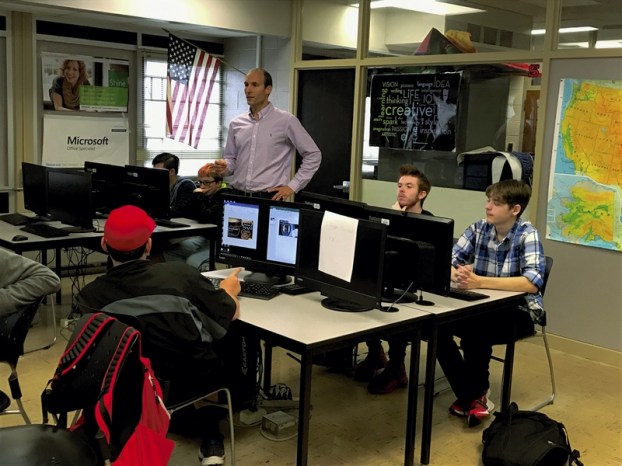 Larry Efird: Zach Thompson was the best version of himself

Sometimes you hear news you’d rather not know. That’s how I felt when I learned that a former teaching colleague’s battle with cancer was over. It wasn’t the outcome all of his friends and former co-workers had anticipated. We wanted Zach to live a full life and watch his children grow up and inspire hundreds of more kids in his high school classes.

When I heard the news, I didn’t have much time before my second block arrived to process such a devastating revelation, so I tried to begin the daily routine as usual. I didn’t realize until I projected the quote of the day on the screen for our morning focus that the quote was not just another thought about positive living — it was about Zach Thompson.

Nothing could have expressed my personal thoughts about Zach Thompson better at that particular moment.

It also helped me to tell my students about him, many of whom he taught several years ago when he was on the faculty of our school. One of those students told me later, “Mr. Thompson wasn’t just a great teacher and a great person. He was my mentor.” Could there be any better tribute to a person who loved his students and who cared for each of them? Could there be any more honest expression of the love of a student for his teacher?

From the moment I met Zach, he was naturally inspiring in the way he reached out to others and made them feel special. He was always interested in them and their needs, their families and their welfare. The only thing we didn’t agree on was our basketball loyalties, since he was an avid Duke fan. I even told him once that knowing him helped me not to be so upset when the Blue Devils beat the Tar Heels because I at least knew he would be happy. And I meant it. Zach had that type of impact upon others.

We recently studied Shakespeare’s Sonnet 73 in my senior English classes. It embodies a poignant message about death — and life. I love that sonnet more each year, maybe because I realized that I am actually older than Shakespeare was when he wrote it. By using a metaphor of a tree which is losing its leaves in late fall, he makes a realization about the brevity of life, but also the need to appreciate its full meaning.

That time of year thou mayst in me behold

When yellow leaves, or none, or few, do hang

Upon those boughs which shake against the cold …

This thou perceiv’st, which makes thy love more strong,

To love that well which thou must leave ere long.

To help them interpret Shakespeare’s point of view, I usually try to explain the seasons of life to my students by dividing 80 years, close to an average lifespan, into fourths. I ask them to figure out what season they are in based on that formula. They seem to grasp it rather easily, and say they are in the spring of their lives. We then discuss the central idea of the sonnet which is usually apparent by that point. Shakespeare realizes his life is running its natural course and the bulk of his life is over. But rather than be depressed about it, he realizes he needs to appreciate it fully before it’s all gone. That’s why it ends on a positive note rather than a negative one, inspiring the reader to appreciate the entire unfolding of life and not dread its end.

Zach Thompson died in the fall of the year but in the summer of his life. He didn’t get the chance to live all of its seasons. When someone dies in the prime of his life, it doesn’t seem fair on the human side of things. But Zach left the rest of us a legacy, inspiring us to be the best versions of ourselves because he was one of the best versions of a human being we will ever know.

Eighty percent of success is just showing up, comedian Woody Allen once said. That truism applies to all ages —... read more