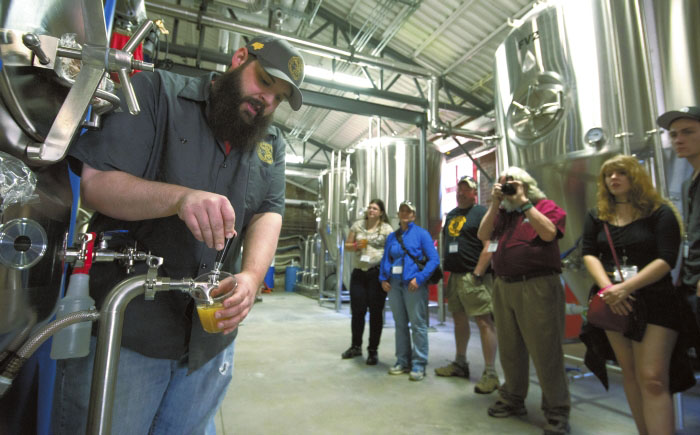 GREENSBORO — New Sarum Brewing of Salisbury joined much bigger companies such as Google, Amazon, Sierra Nevada and Weyerhaeuser when it was recognized last week as a 2017 Clean Energy Champion.

Presented at the Proximity Hotel in Greensboro, the award came from a group called Conservatives for Clean Energy and also Chambers for Innovation and Clean Energy. Nearly 90 business leaders and government officials attended the third annual awards presentation.

New Sarum Brewing received the small business award for its focus on the highest levels of efficiency — from its original construction, to the brewing process, to energy usage in the facility.

When upfitting the building, New Sarum chose to focus on installing a heat-reflective roof to reduce cooling costs and LED lighting throughout the facility.

In addition, the brewery’s outdoor lighting is on a solar timer; the brewing system allows the business to reclaim heat energy and recycle brewing water; and New Sarum distributes spent grain to local farmers to be used as feed for cattle, instead of discarding it.

According to the N.C. Sustainable Energy Association, which tracks renewable energy projects registered at the N.C. Utilities Commission, nearly a dozen breweries across North Carolina have installed solar panels or plan to do so in early 2018. Outer Banks Brewing Station has small-scale wind turbines.

“It’s exciting to recognize such a diverse mix of businesses from across our great state and see business leadership and new clean-energy opportunities steadily grow each year,” said Mark Fleming, chief executive officer and president of Conservatives for Clean Energy.

“The growing trend across industries to install renewable energy and energy efficiency technologies explains how we could have such a successful gathering — and it’s a snapshot of where more North Carolina businesses are headed.”

Those sentiments were echoed during the program’s panel discussion on modernizing North Carolina’s electrical grid — an endeavor that is underway or being debated in 37 states and the District of Columbia.

Panelists spent time discussing the differing definitions of cost-effective grid modernization proposals, as well as the rapidly declining cost of battery storage and smart-grid technologies that will continue to drive business adoption of clean energy.