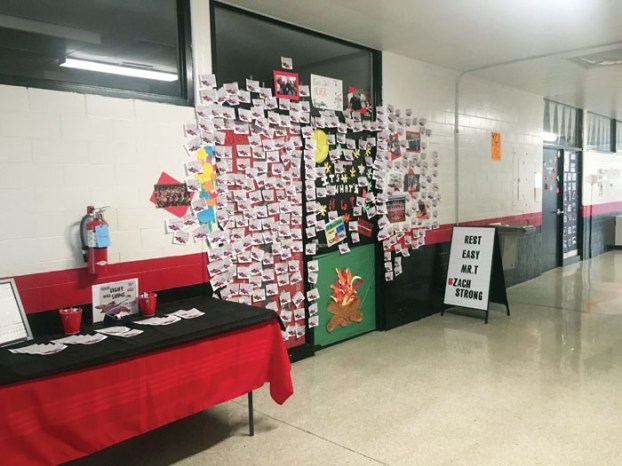 Thompson was diagnosed with glioblastoma on the first day of school in 2016, according to South Rowan Principal Kelly Withers.

Withers said Thompson had been teaching at South Rowan only since March 2016 but that she felt “odd” saying that he had been there for such a short time.

“The impact he had was monumental in the time he was there,” Withers said. “And part of that was just his consistent positive presence.”

Withers said Thompson was still teaching until Wednesday of last week. He went to the doctor Thursday and was hospitalized Friday morning.

“He worked right up until he absolutely could not anymore,” Withers said.

She said he had three main focuses: his faith, his family and his students.

Thompson was married to Cassie Safrit Thompson. The couple had three children — Ruby, who is almost 1, and Brooks and Parker, who are 3.

Thompson had a large extended family on Cassie’s side, with about 20 cousins who are close-knit.

Many of them spoke about how quickly Thompson became part of the family.

“It was kind of like we gained a cousin, but I gained a brother,” said cousin-in-law Adam Petrea. “We kind of grew together. We coached T-ball together. We went to the beach together.”

Another cousin-in-law, Corey Stiller, said his favorite memory of Thompson is from a night at DJ’s when a man kept giving Stiller “mean looks.”

“The guy explains (that) I looked at him funny. Zach assured him there was no issue and, within minutes, we’re all sharing a beer together,” Stiller said. “His willingness to stand up for anyone and make the best of any situation was what really made him a great friend.”

Les-Lee Peeler Ihme, the eldest of Cassie’s cousins, said she always tried to look out for Cassie when it came to dating. Then, Cassie met Zach.

“The first time I met him, I knew she had met the one,” Ihme said. “He was truly one of the best people you could hope to meet. You were proud to call him family.”

In March, as part of the Love Thy Neighbor benefit series, Concordia Lutheran Church and Trinity Lutheran Church planned a community breakfast and two races to help raise money for the Thompson family.

At that time, Thompson was part of a clinical trial at the Preston Robert Tisch Brain Tumor Center at Duke University Medical Center. He told the Post in March that his MRIs showed that his tumor was not growing.

Petrea said Thompson was the kind of person who didn’t want people to worry about him. Because of that, he didn’t really notice Thompson getting worse over the past several weeks.

“You could see little subtleties. He wasn’t the Zach I remember the last month. But he was still there,” Petrea said.

Petrea said that in addition to teaching at South Rowan until two days before being hospitalized, Thompson also taught Sunday school at his church, Stallings Baptist, earlier that week.

Withers said a memorial service will be held for Thompson in the South Rowan High School auditorium at 4 p.m. Sunday.

She said that since Thompson was an instructor with the school’s Communications Academy, some of his students will make a video to honor him.

The memorial will be open to the public.