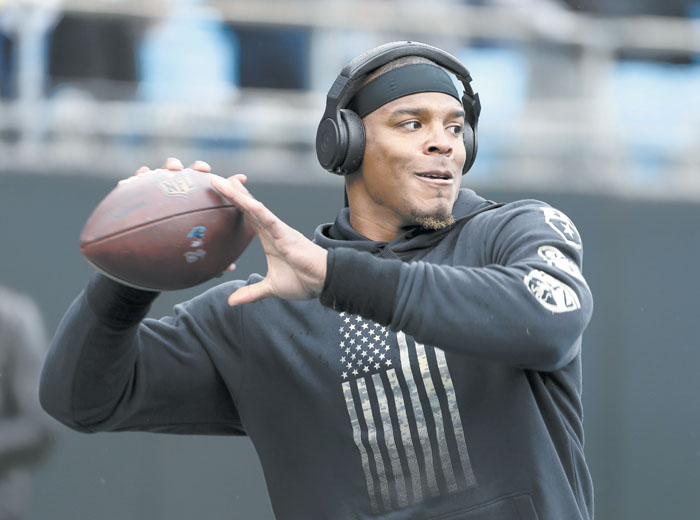 CHARLOTTE (AP) — Cam Newton describes it as his resurrection day.

The Carolina Panthers quarterback reflected on his arrest in 2008 for stealing a laptop while at the University of Florida. He reflected Wednesday on what he said was a low point in his life.

Newton was charged with felony counts of burglary, larceny and obstructing justice. He posted his police mug shot on the nine-year anniversary of his arrest Tuesday, saying he did it to show others that people can rebound from the mistakes.

“A lot of me changed that day, for obvious reasons,” Newton said during a news conference on Wednesday. “My biggest scar, in essence, ended up being my biggest star.”

He thought his football career was over. He completed a pretrial diversion program, struck a plea deal and all charges were dropped. The moment still sticks with Carolina Panthers quarterback as the low point of his life.

Since transferring from Florida amid allegations that he cheated on classwork, Newton has enjoyed plenty of success on the field. He has won two national championships — one at Blinn College and another at Auburn. He was the No. 1 pick in the NFL draft in 2011, is a former league MVP award, has played in three Pro Bowls and a Super Bowl. The 28-year-old has also run for more touchdowns than any QB in NFL history.

He also has several endorsement deals.

Newton said he contemplated whether or not to post his arrest photo, knowing it would open him up to more scrutiny from and bring back some painful memories. But he said he thought someone who has made a mistake might benefit if he did.

“For a person that probably made a mistake, no matter what it was, to try to be better from it,” Newton said. “I have (people I know) that are in the penitentiary, family members that are incarcerated. But yet that doesn’t define them. We are all owed a second chance, even third and fourth chances.

“It is what you learn from it that defines you.”

Newton has had to live by those words.

His share of off-the-field issues didn’t cease after he left Florida.

In 2010, the NCAA said Newton’s father, Cecil Newton, and another unnamed person tried to market Newton “as a part of a pay-for-play scenario in return for Newton’s commitment to attend college and play football.” Newton was suspended for one day but then reinstated after an NCAA investigation determined he had not violated any rules.

Newton’s image took a hit after his abbreviated press conference following a Super Bowl loss to the Denver Broncos in February of 2016 where he barely answered questions, carrying himself as a poor loser.

And he lost a sponsor earlier this year following sexist remarks he made to a female reporter during a news conference. He later apologized on social media for his comments.

Newton said after talking with a friend about all of his past problems he decided to post the arrest photo, saying he was “thankful” for a second chance.

“I don’t want to be the poster child of perfection because when you put yourself up on that pinnacle and you finally mess up, that’s when it all comes tumbling down,” Newton said. “I want people to look at me and say, ‘Cam is still going strong, but look at the mistakes that he has made.’

“I’m still a work in progress myself.”

“It was a turning point in his life, obviously,” Panthers coach Ron Rivera said. “I think it helped him. He could have gone one way or the other. I think it motivated him to do things the right way.”