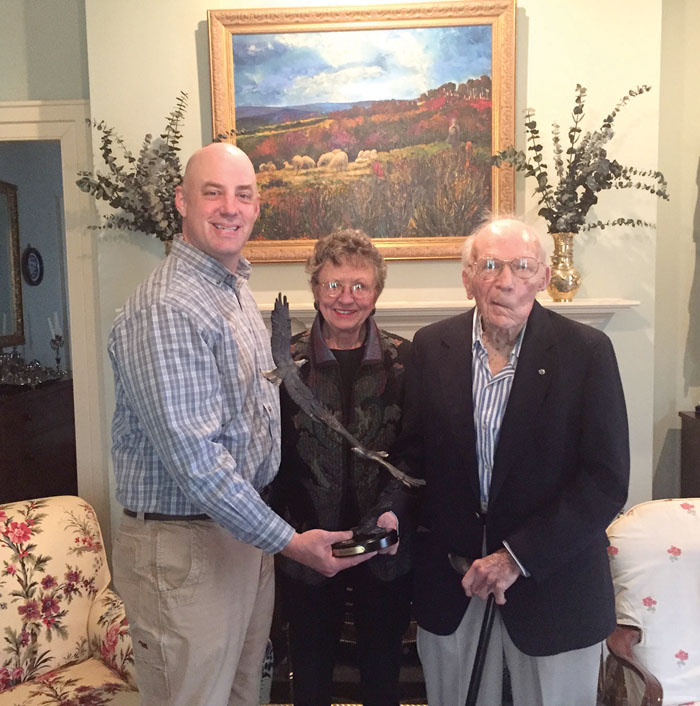 The LandTrust for Central North Carolina awarded its second year of conservation honors on Nov. 11 at a dinner for Three Rivers Society members at artist Bob Timberlake’s gallery in Lexington.

Bill and Nancy Stanback won the Fred Stanback Conservationist of the Year Award. The award is named in honor of Fred Stanback, who has contributed much to conservation across North Carolina but especially to the LandTrust for Central N.C.

Bill and Nancy Stanback have also been ardent supporters of the LandTrust for many years, most recently making a donation to the Alcoa project. This is LandTrust’s effort to secure 4,700 acres and 76 miles of shoreline on the Yadkin River from Alcoa (Aluminum Company of America).

The Clean Water Management Trust Fund was awarded the Governmental Conservation Partner of the Year. The fund has supported many LandTrust projects over the years and most recently awarded a grant of $1.2 million to the Alcoa project. The fund’s executive director, Walter Clark, accepted the award.

The federation has partnered with LandTrust on youth hunting days and conservation projects like the Birkhead Property, 290 acres in Randolph County recently transferred to the North Carolina Wildlife Resources Commission for inclusion in its game lands program. Richard Plattenberger, Zac Morton and Wynn Smith accepted the award.

The Volunteer of the Year award was presented to Shelley Williamson. Shelly has helped get files in order following LandTrust standards in compliance with national accreditation.

LandTrust has implemented a Sportsman Access Program in which members who sign up as sportsman donors are entered into a permit draw to hunt on LandTrust properties. The hunters also have opportunities to give back to LandTrust by donating their time and efforts toward land management programs.

Tim Goodman was named Sportsman of the Year. He has helped LandTrust by installing gates and doing other needed work on the lands. He also harvested a buck that scored 145 recently on LandTrust’s Low Water Bridge Preserve.

The Leopold Society School of the Year was Sacred Heart Catholic School. Hillary Shores accepted the award. She is a middle school science teacher and has gotten her students involved in the Leopold Society, LandTrust’s outreach effort to engage youth in conservation.

The County Chapter of the Year Award went to Richmond County. LandTrust is developing chapters in each of its 10 counties. Richmond has been a proactive chapter, hosting hikes and kayak trips as membership drives, as well as getting involved in conservation projects in the county. Sarah Ferguson accepted the award.

Cade Harrill received a $1,000 college scholarship. He was involved in the Leopold Society at his high school and wrote an essay on what conservation means to him. He attends Western Carolina University. The scholarship was made possible by a grant from the Alcoa Foundation.

To learn more about how to support the LandTrust for Central North Carolina, contact Crystal Cockman at 704-647-0302 or crystal@landtrustcnc.org.