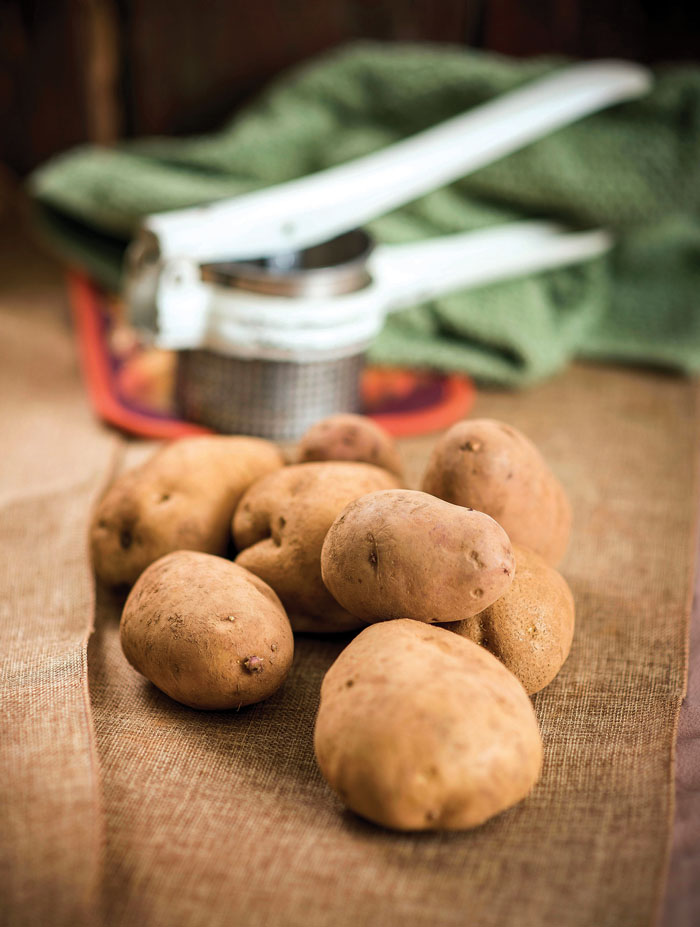 One of the things I most look forward to on Thanksgiving is mashed potatoes. It started with my little Irish grandmother in her New York City apartment.

My grandfather was a real meat and potatoes kind of man. They called each other Mom and Pop, which is what I called them, too.

My grandmother was the queen of roasted meat. She could roast anything perfectly and deliciously. I don’t think she ever made a casserole of any kind. She also made delicious gravy, as did my mother. I will say, I do a mean gravy because of their techniques.

But, this is about potatoes, which you’ll likely have at Thanksgiving and Christmas and any old time of the year.

There were no potato flakes or buds or pre-made potatoes in a tub.

Now, of course, prepared potatoes of all kinds are an industry, with scalloped, au gratin, tots, hash browns — shredded or diced — fries, anything you can imagine, frozen and ready to cook, or already cooked and ready to reheat.

Yukon Gold potatoes are very popular these days, considered an all-purpose potato that’s good for everything from potato salad to mashed potatoes.

I say mashed and for that matter, baked, potatoes have to be russets. They don’t have to come from Idaho. Red potatoes are far too waxy to be fluffy. The Yukons are OK, great for many uses, but I prefer them for salads or other potato dishes where you need a fir potato.

We’ll start from scratch for what I consider to be the best. The most important piece of equipment you need is a potato ricer. A potato ricer or food mill gives you fine, fluffy strands of potato, and no lumps.

The one I use is ancient, and dependable. Once, I bought a new ricer, and it literally crumpled the first time we used it. It has to be sturdy enough for you to squeeze the cooked potatoes through without bending anything.

It’s going to be hard to find a ricer like the one my mother and grandmother had. Its barrel is pierced on the sides and bottom, so potato comes out all around, and the work goes quickly.

But with a ricer and a hand-held mixer, you will reach potato nirvana.

The running joke in my family is we always made too many mashed potatoes. Every year, we’d quote my grandmother, “But I only did 3 potatoes,” and laugh, looking forward to the leftovers.

My parents are both gone now, and for the first time in my life, I will not cook anything for Thanksgiving. I might dream of potatoes instead.

Peel potatoes and cut into 1-inch cubes. Place in a 3-quart pot about half full of water. Liberally salt the water and bring the potatoes to a boil, cooking for 15-20 minutes until tender, but not soggy. Meanwhile, cut butter into tablespoons and set aside. Heat milk, or if you’re feeling decadent, cream, in a glass measuring cup in the microwave until very warm, but not bubbling.

Once potatoes are done, drain in a colander.

Drop 2 tablespoons butter into the bottom of the cooking pot and, using ricer,  process the potatoes, adding butter as you go.

Once all the potatoes have gone through the ricer, give them another sprinkle of salt and use a hand mixer to begin blending in the warm milk. If the potatoes reach a fluffy consistency before you’ve used all the milk, don’t worry. It depends on the potatoes. Beat at medium speed until the potatoes are fluffy. Check for seasoning and serve. The cook gets to lick the beaters.

Slow cooker Thanksgiving sides are the rage this year, and these slow cooker potatoes might work well for you and your space.

• 3 cups milk, or a mixture of milk and cream

Smash the garlic cloves, if using., and drop on top of the potatoes. Sprinkle with salt and black pepper.

Pour in 11/2 cup milk and stir the potatoes once.

Cover the slow cooker and cook 4 to 5 hours on high or until the potatoes are very tender and soft. Turn the heat to warm.

When the potatoes are done, add the butter and about a cup of the remaining milk.

Remove garlic cloves if desired. Mash the potatoes in the cooker. Some brown spots are normal from the heat of the cooker.

Taste and season with salt and pepper. Leave on warm, reserving some milk if needed before serving. Put a kitchen towel under the lid to keep steam from making the potatoes watery.

It is important to use russet potatoes here. Other types will become waxy and a bit gluey. Adjust the milk to your taste when mixing.

• salt and pepper to taste

Bring a large pot of water to a boil and add the potatoes and a tablespoon of salt. Boil until fork tender, 15-20 minutes.

Drain potatoes in large colander and return them to the dry pot on the stove. Mash the potatoes over low heat, allowing steam to escape before adding the other ingredients. Stir in 1 and 1/2 sticks butter, the cream cheese, heavy cream and salt and pepper to taste. Mash to combine.

Serve them immediately or make ahead to reheat. To reheat, butter a 4-quart baking dish, add the potatoes and dot the top with the remaining butter. Bake in a 350 degree oven about 20 to 30 minutes, or about 1 hour if it is cold from the fridge.

This is half her usual recipe — so if you want more, use 10 pounds of potatoes, two packages of cream cheese, four sticks of butter and 2 cups of heavy cream. And if you have a bowl large enough to mix that in, send me a photo! You’ll also need two 4-quart baking dishes.

Place potatoes in a large pot and add enough water to cover. Bring to a boil and add 2 tsp. salt. Simmer until very tender, 20-25 minutes. Drain potatoes and return to pot.

Add the butter, sour cream and some of the milk, along with more salt and pepper and mash until smooth. Adjust the milk to reach desired consistency, or add more sour cream. Top with a sprinkling of chopped chives. These are more like creamed potatoes, due to the consistency.

Some people like a crunchy topping on mashed potatoes. I think the whole point is they are soft and melt in your mouth.

Some recipes call for sprinkling those french-fried onions on top, like the one on the green bean casserole.

One recipe that uses Yukon Gold potatoes and lots of sour cream (no milk), tops the potatoes will a mixture of bread crumbs, Parmigiano-Reggiano cheese and butter.

I once had mashed potatoes that included a cup of gruyere cheese, and they were good. You know cheese and potatoes play well together, but avoid the processed cheese stuff in a box.

Brie could be divine in mashed potatoes because it melts so well.

Some chefs add truffle butter, but that seems extravagant. Maybe if all you were having were a meat, potatoes and a salad.

If you’d like the tang of sour cream tamed a bit, use 1 cup sour cream to 1 8-ounce package cream cheese (again no milk), and plenty of butter.