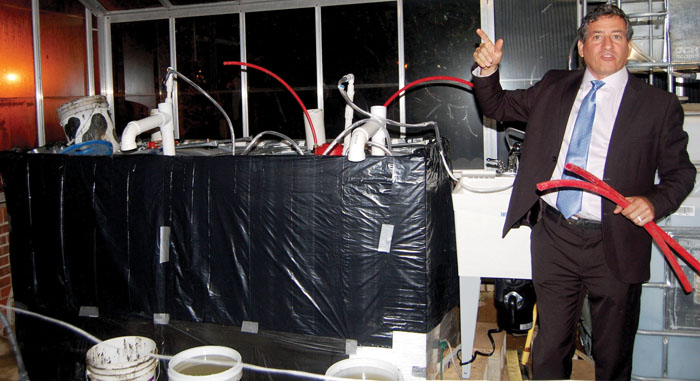 Dr. T.H. Culhane answers questions about biogas next to a biodigester that Catawba students, faculty, and he built. Spencer Dixon/For the Salisbury Post

SALISBURY — The Center for the Environment partnered with Catawba College’s department of environmental sustainability to host National Geographic Explorer T.H. Culhane’s presentation “Synergies and System Thinking in the Service of Sustainability” on Monday night.

Culhane spoke about biogas and his experience creating biodigesters around the world.

Biogas is the natural gas created from garbage and human waste through a biodigester to create a renewable and sustainable power source.

The biogas initiative centers on the idea that there is no such thing as waste.

“Waste is a verb or adjective but not a noun because we can use everything considered waste for a greater purpose,” said Culhane.

To begin, Culhane discussed how he doesn’t only study biodigesters and biogas; he uses them in his everyday life.

Beginning in 1999 at an apartment in Los Angeles through his current 40-foot camper home, Culhane strives to live “off the grid” by eliminating his reliance on fossil fuel. He and his wife use biogas to cook, to power the RV, and to fertilize their garden.

In their lives, nothing goes to waste because all the waste and food scraps they produce go directly back into the biodigester.

Biodigesters can be made from everyday materials such as pickle barrels. The easy construction allowed Culhane to take his research internationally from Cairo to Mexico, establishing biodigesters in impoverished urban areas.

Biodigesters not only produce power, but they can create fertilizer as well. According to Culhane, biodigester-produced fertilizer can help establish peace by eliminating conflict over arable land.

“Biodigesters are a nexus of peace between Palestine, Israel and Jordan because of the common enemy of waste,” he said.

Even though other natural energy sources such as water, wind, and solar exist, Culhane believes biogas is “the missing piece of sustainability” because it can function as a baseline power source that can be supplemented by other renewable sources.

Culhane did more than speak during his visit. He worked with Catawba faculty and students to create the first biodigester in North Carolina in the greenhouse beside the Center for the Environment.

On his trip to Catawba, Culhane said, “I see such heart and vision in the community that I feel plugged into the future.”

Anyone interested in learning more on biogas and biodigesters can visit solarcities.eu for information as well as a step-by-step guide to making a biodigester for the home.