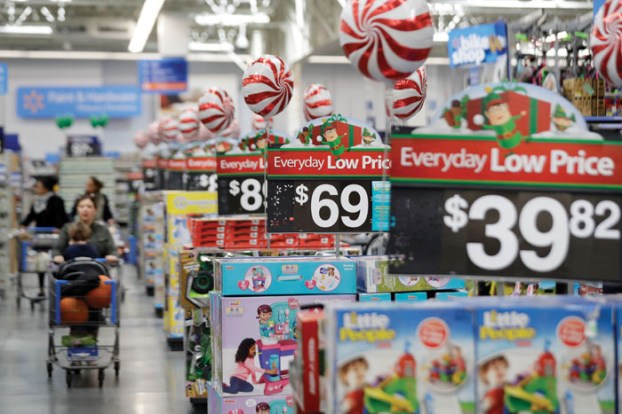 This Wednesday, Oct. 26, 2016, file photo, shows prices in the toy section at Walmart in Teterboro, N.J. With shoppers moving more seamlessly between stores and mobile devices, retailers are trying to find a balance between investing in both. Until now, Walmart's goal was to keep store and online prices the same. But now it’s raising prices for certain items online that would be unprofitable to ship, and noting that on its website so customers can choose to shop online and pick up from a store. (AP Photo/Julio Cortez, File)

SALISBURY — The rules of Black Friday etiquette that stores must follow seem to change every year.

Big Lots and Bass Pro Shop will be open at 7 a.m. and 8 a.m. Thanksgiving Day, respectively.

This means that if families choose to stay home on Thanksgiving, the incentive to shop at those stores on Black Friday is much less. By Friday, Thanksgiving Day sale hunters may have already scored all the best deals.

Many shoppers have turned to Cyber Monday, according to holiday polls by Ipsos and Google. The polls, taken in October and November, showed that 71 percent of holiday shoppers planned to shop on Cyber Monday.

And 57 percent planned to shop on Small Business Saturday — a holiday that Rowan Chamber of Commerce President Elaine Spalding hopes people will give more consideration this year.

“We’ve been promoting it for several years … since 86 percent of businesses have fewer than 20 employees all over Rowan County,” Spalding said.

Downtown Salisbury Inc.’s Holiday Night Out — which is 5 to 9 p.m. Friday — might serve as a bridge between Black Friday and Small Business Saturday.

Downtown Salisbury promotions coordinator Kaitlin Rice said the promotion will be the “kickoff for the holiday season” for downtown businesses and that it will be a  different experience from traditional Black Friday shopping.

In addition to having downtown shops open until 9 p.m., Holiday Night Out will feature a “winter wonderland” on East Fisher Street.

That will include a bounce house, hot chocolate, an ornament making station and live music. There will also be carolers roaming around downtown.

“Families really seem to like the intimacy of local shopping, especially with extra activities that we offer. It’s a win-win for everybody,” Rice said.

For those who have their eye on a specific item for their child or loved one at a big-box store, shopping on Thanksgiving Day may still seem like the best option.

According to the holiday Ipsos poll, Walmart, Target and Kohl’s are the biggest retailers that holiday shoppers focus on. All of those stores will be open on Thanksgiving Day.

The most popular gifts, according to the poll, are clothing, electronics and gift cards.

For more information about what stores will be open on Thanksgiving and Black Friday, visit blackfriday.com/black-Friday-store-hours.

By Spencer Dixon SALISBURY — The Center for the Environment partnered with Catawba College’s department of environmental sustainability to host National... read more