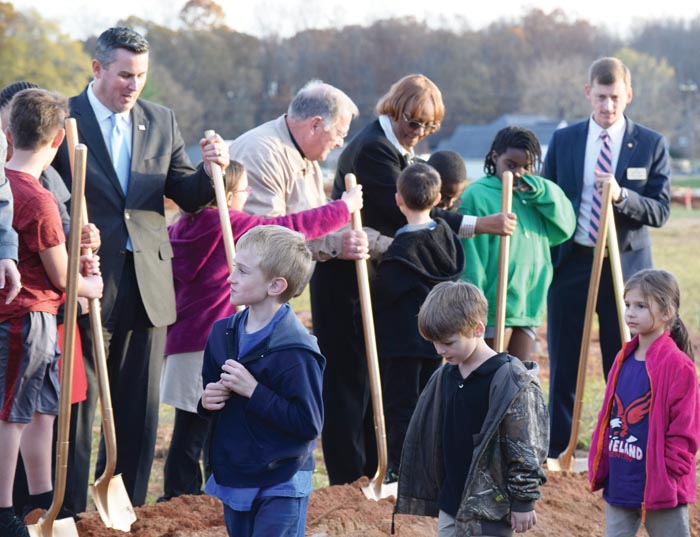 CLEVELAND — As men turned over red dirt in the background, the words that came to mind were “at last.”

After nearly 10 years of back and forth, discussions, arguments and meetings, Rowan-Salisbury Schools broke ground for West Rowan Elementary School on Monday afternoon.

The new school will merge the student bodies of Cleveland and Woodleaf elementaries, two of the oldest school buildings in the district.

Kennedy and Miller have watched the struggle unfold over the years, from when the board originally approved the merger in 2008 to when it pushed the decision through in 2014. For Kennedy and others who backed the decision, it was a historic occasion.

“This morning I thought that this school will be here when probably none of us are,” Superintendent Lynn Moody said.

Moody was joined by members of the Board of Education and Rowan County Board of Commissioners, as well as by local elected officials, business leaders, and the teachers and students who will call West Rowan Elementary home.

The 100,000-square-foot building will cost roughly $27.5 million to build and is expected to be complete by December 2018. Originally, the Board of Education sought a neutral property roughly equidistant from the Woodleaf and Cleveland communities.

However, after several properties were dismissed by the public, the board settled on a 41-acre parcel behind the current Cleveland Elementary School. The old building will be demolished once its students move into the new one.

“I hate to see the old school go, but you have to move forward,” Cleveland Town Commissioner Travis Summitt said.

Summitt said he’s grateful that Cleveland will still have a school.

“A community without a school is a barren community — for a town, anyways,” he said.

Former Board of Education member Chuck Hughes, who was voted out as Salisbury’s representative in 2016, came to see culmination of his years of service.

“I think this was one of the most important things we’ve done in the four years I was on there,” he said. Now, board members and many in the community look forward to starting a shared history together.

“Things change, histories change and legacies change,” board member Travis Allen said Monday. “But this group of teachers and children have the chance to start a new legacy.”

Allen, who grew up in the Cleveland and Woodleaf area, said he believes the merger will be a positive that will benefit the whole area. And he plans to keep his pulse on the construction’s progress.

“I’ll be coming by and checking every couple days,” he said.

The new building was designed by SfL+A Architects, with construction handled by Barnhill Contracting. Kristine Wolfe, current principal of Cleveland and Woodleaf elementaries, has been tapped to head the new school.