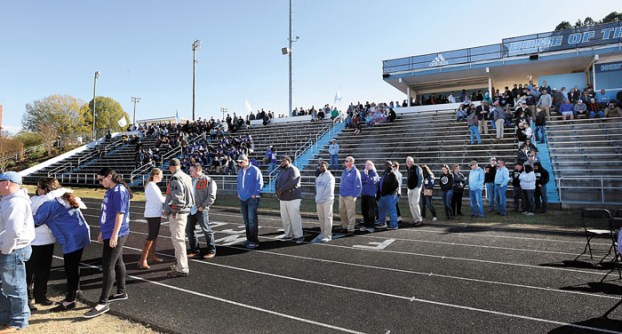 The line was long at West Rowan's Falcon Stadium on Sunday afternoon for Scott Young's Memorial Service as people lined to speak with Young's family. photo by Wayne Hinshaw, for the Salisbury Post Dianne Young conforts her son Bryant after he spoke at West Rowan’s Falcon Stadium on Sunday afternoon for Scott Young’s Memorial Service. photo by Wayne Hinshaw, for the Salisbury Post

Chris Tomlin’s song, “I Will Rise,” was playing on the car radio when the Youngs followed the ambulance transporting Scott, his heart failing, to the hospital for the final time.

And I will rise when He calls my name
No more sorrow, no more pain
I will rise on eagles’ wings
Before my God fall on my knees

Fair skies did their best to emulate Falcon Blue and a chilling wind whipped hard out of the northwest. It was a brisk November day, ideal football weather. It was easy to retreat mentally to eight (and nine) short years ago when eager teams from Tuscola and South Point charged off buses on cold November Fridays for Western Regional finals, only to leave Mount Ulla with hopes trampled and dreams splintered. Young’s heart was healthy then. He and his assistants were the best in the business, and his physical, blue-collar, smash-mouth program was on top of the world.

“We weren’t fancy,” said current West coach Joe Nixon, who assisted Young for years. “Everyone knew exactly what we were going to do, but Coach believed our guys would still find a way.”

A rural 3A school, surrounded by cows and cornfields, was an unlikely place for a football power to rise, but the Falcons made history. In 2010, they owned the nation’s longest active winning streak at 46 in a row.

Young, who turned 46 in September, was eulogized by a number of people, including his three children. He and his wife, Dianne, raised three sturdy ones. Bryant and Ally, Statesville High students, grew up as a West Rowan kids, but now they’re a strapping senior quarterback and a poised sophomore softball/volleyball player.  It’s clear their father’s passion for sports and doing the right thing will live on through them.

“The best word for my feelings about my dad is admiration,” Ally said. “And he’s very much alive in all of us.”

Brody, the little Young, was the bravest of all, escorted by his siblings to the podium to speak. Every female in the audience wanted to hug him. Red-eyed, 70-year-old football coaches wanted to shake his hand.

Conversation about Scott Young always has to start with his 172 wins in 17 seasons as West Rowan’s head coach. The nine conference championships (eight in a row). The four straight trips to the 3A state title game. The three-peat state championships in 2008, 2009 and 2010. The 44 straight county wins over an 11-year period.

The stadium scoreboard will display Young’s legacy to the world as long as West Rowan stands. Those state titles are listed proudly.

If you sculpted a Mount Rushmore of Rowan County’s all-time football coaches, he’d definitely be one of the four. If you created a Mount Rushmore of Rowan’s all-time coaches, including every sport, you can make a good case for him as one of the four. For a guy who was a head coach for the last time at age 43, his impact at a school that had rarely won in football before his arrival was absolutely staggering.

They spoke about Young, molder of young men, on Sunday with a colorful backdrop of family photos surrounding the revered plaques from West’s three straight state championships.

Scarred football helmets from each of the schools that helped shape Young into the coach and man he became were positioned on tables behind the podium. Represented were East Rowan, where Young played in high school in the late 1980s, and Guilford where Young competed in college ball. Next, Davie County, where Young was an assistant coach getting his feet wet. West Rowan, of course, and then Statesville, where he served as an assistant to Randal Gusler the past two seasons.

“I was beside Coach for 14 years,” Nixon said. “I was just a kid out of Catawba College and he took me in and his family took me in.”

Life has been exciting for Nixon since he joined the West staff. In 2008, he won a state championship and got married on the same day. Nixon had only been given one assignment for the wedding — to pick out a date. He thought Dec. 13 would be well after the season. But then West started to roll. And then, suddenly, the Falcons were in their first state title game on … you guessed it, Dec. 13.

Nixon was rushing around after the championship victory, worried about getting from the field in Winston-Salem to the wedding chapel at Catawba on time. Young offered him sound advice. “Just relax,” Young told him. “They can’t start the wedding without you.”

Nixon got another piece of wisdom from Young when it came to building a winning coaching staff.

Jeff Chapman was an assistant coach for Young in the glory days and got to work with K.P. Parks, the 10,000-yard rusher, as well as standout QB B.J. Sherrill.

But before Parks and Sherrill came along there was a building process.

“I remember us playing at Concord and the difference between us and Concord was they expected to win and we hoped to win,” Chapman said. “But it didn’t take long for Coach Young to have us believing we would win.”

Gerry Steedley, Young’s youth pastor years ago, remembered Young as “aggressive, determined and strong-willed,” and Young wanted desperately to win at whatever he got involved in, even trash-can baseball and taggle, a combination of tag and tackle football.

“Scott was a man of faith, he fought the good fight to the end and he finished his race,” Steedley said. “He left a legacy of championships and provided great memories for all of us.”

Don Vess had serious concerns about the new family moving in next door 12 years ago, but the Youngs turned out to be the best neighbors he ever had. Vess drew some laughs when he said the Youngs didn’t need hand trucks to move in their furniture and appliances. Burly West Rowan football players handled all the moving.

Anita Roberts offered a unique perspective, as she talked about Scott Young, the championship-winning travel ball softball coach. Ally’s athletic career — and it’s going to be good one — was just as important to the coach as Bryant’s efforts on the gridiron. He got her started.

Jarvis Morgan, a receiver who shined for West’s 2010 and 2011 teams, spoke about Young from the viewpoint of a player. Morgan is talented, but his college career has been a convaluted maze of transfers and injuries. He’s still battling. “The last time I talked to Coach he told me he was proud of me and he believed in me,” Morgan said. “I’ll never forget that. He was a second father to me.”

Young’s personal icon was Bear Bryant, who directed Alabama football to seven national championships in a 25-year tenure from 1958-82. The service closed with the poem that was found in the Bear’s wallet when he died.

“This is the beginning of a new day. God has given me this day to use as I will. I can waste it or use it for good. What I do today is very important because I am exchanging a day of my life for it. When tomorrow comes, this day will be gone forever, leaving something in its place I have traded for it. I want it to be gain, not loss — good, not evil. Success, not failure in order that I shall not forget the price I paid for it.”

Scott Young’s son obviously is named after Bear Bryant, and he turned in a stellar senior year at Statesville that included wins against Carson, East Rowan and West Rowan to close the regular season. Bryant had dreamed about returning home to play on West Rowan’s field, but it was a more difficult night than anyone had envisioned. Scott checked himself out of the hospital the day of that game. He listened to the the game on the car radio, and watched from the hilltop parking lot overlooking the field.

“After that game, my dad told me he was proud of me, that I was a Young, and that I was a winner,” Bryant said. “My dad and I spent a lot of time together last summer. He took me to 17 quarterbacks camps in two months, and we had a great time. He was a lot more than just my dad. He was one of my best friends and he was my hero. He did everything he could to prepare me for what’s next, and I’m going to make it happen. I’m going to make it happen for him.”

Those who came to the celebration filed out slowly up the steep, light blue steps and trudged toward distant cars parked near cornfields. They had come to Mount Ulla from all corners of the county, from Kannapolis and Mocksville, from Mooresville and Statesville.

One man wore a gray hoodie, vintage 2010, with these words printed boldly in black on the back: “What happens in Mount Ulla … goes down in history.”

That sweatshirt said it all. Scott Young took his community and his county on a thrill ride that may never be duplicated.

From staff reports PETERSBURG, VA – For the second time in three seasons, the Winston-Salem State Rams (22-7) are the... read more