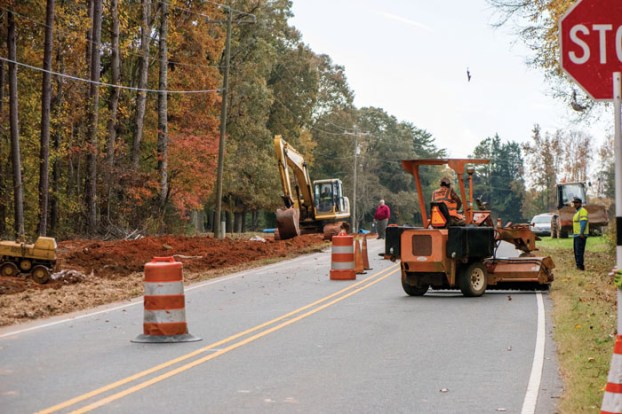 JON C. LAKEY / SALISBURY POST Water improvement projects in East Spencer is underway. Terry's plumbing and Utilities from Asheboro is the contractor on the project. The first leg of the construction project is to tap onto a 12 inch main lane on Choate Road to bring a second and larger supply of water to the town. Monday, November 6, 2017, in East Spencer, N.C.

EAST SPENCER — Motorists who’ve passed Choate Road recently have no doubt noticed the digging that’s been done and the large pipes that line part of the roadside. The long-awaited water/sewer project in the town of East Spencer began recently and will continue through early next year.

The town for a number of years has experienced extremely high water rates and local officials began a study to determine how they could help alleviate some of that cost to residents and commercial customers.

In 2008, the town began a project with the U.S. Department of Agriculture (USDA) to replace old water lines because they were leaking, but the system has since continued to struggle with water loss. Interim Town Administrator F.E. Isenhour admitted they didn’t get all of the work done in that project, and the town was still left with leaks as well as water pressure and valve problems.

In 2014, the town retained the N.C. Rural Water Association, a group that was able to study the town’s water system, specifically the amount of water it was losing. During that process, there were 20 leaks found within the system.

When the Dunbar Center caught fire in December 2014, it shed some light on an already weak water system. There was so much water being used to battle the fire, it shut down East Spencer’s water supply. Firefighters had to haul water from nearby Spencer, which in turn shut down its supply too.

Isenhour said the reason it has taken the project this long to get started is that it takes a long time to have an engineer look at the system, assess the needs and create a plan to fix it. He said the project should be completed in six months.

In December 2014, the town was awarded over $2.4 million in state and federal funds to reduce water losses by providing a looped system with a new water line following Choate Road to the Aldi Distribution Center property on Old Union Church Road. Part of the funding was received from the N.C. Department of Environmental Equality’s Division of Water Infrastructure.

“It’s the best place to get a second water line in town,” Isenhour said of Choate Road.

Hanford Dole Elementary School follows along Choate Road, and although the road is not within the city limits when the state reworked Interstate 85 the lines placed there were smaller than 12 inches in diameter and insufficient to feed into the town.

Isenhour said putting a 12-inch line at Choate Road is the simplest way to get a second water supply to the town.

This project will put in place new hydrants and install more valves. There are some places along the water lines where the town just can’t reach the valves.

The work will be done one road or area at a time, Isenhour said.

The Choate Road portion of the project is expected to be completed by Thanksgiving. He said they will set up a different project throughout town that includes disconnecting the old line, which had breaks or water leaks.

The reason they are only working on one project area at a time, Isenhour said, is because the town didn’t want to inconvenience residents throughout the whole town. Letters will be mailed to residents notifying them of when the project will commence in their area.

Two contractors bid on the project and the town board asked for more bids, but received bids only from those same two contractors the second time. Isenhour said there are similar problems at the state level where there aren’t that many contractors who will take on a project of this caliber.

McGill Associates in Hickory has completed the engineering and Terry’s Plumbing & Utilities Inc. in Asheboro is the contractor.

The project would’ve begun Aug. 28, but was sidelined after a plant that was to supply material was temporarily out of commission during Hurricane Harvey, which meant no pipes. The company that would’ve provided that piping wasn’t able to send the material out and when the piping was available, it came at a higher price to the contractor.

Isenhour said this snafu will result in no additional cost to the town, but it will have to reduce the original project. Any higher cost associated with the piping will be taken on by the contractor.