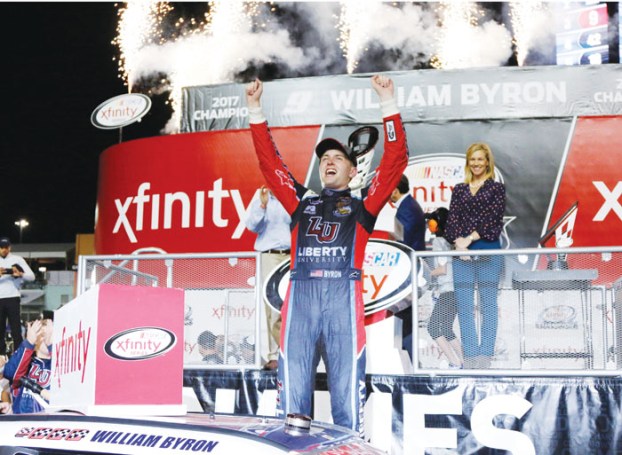 HOMESTEAD, Fla. (AP) — Dale Earnhardt Jr. got the best retirement gift he could have asked for when William Byron won the Xfinity Series championship for JR Motorsports on Saturday, one day before Earnhardt’s final race as a full-time driver.

NASCAR’s most popular driver is a part owner of the race team with sister Kelley and boss Rick Hendrick, and JR Motorsports went in to the finale at Homestead-Miami Speedway with a 75 percent chance of winning the title. JRM drivers Justin Allgaier, Elliott Sadler and Byron were up against Daniel Hemric of Richard Childress Racing for the championship.

Hemric appeared up for the challenge at the start and he led the title contenders until he headed to pit road with a dead battery early in the second stage. The team frantically changed the battery, but his car still had no power after the swap. When Hemric finally got back on the track, he was down 12 laps from the leaders.

That sealed the title for JRM, and the organization only had to watch to see which of its three drivers would take the crown.

Calling the race for Allgaier? Seven-time championship-winning crew chief Chad Knaus, who was filling in for Allgaier’s suspended crew chief. Earnhardt likened the call to the bullpen to having Joe Gibbs coach a kid in Pop Warner football.

Although a second title for JRM was in the bag, it wasn’t without anxious moments.

“Man, that is tough watching those guys battle like that together,” said Earnhardt. “One thing about William winning, the over-the-wall guys I’m pretty close to a lot of them.  They pit my car too.  It’s pretty cool to see these guys enjoy themselves. This really affects a lot of people. I’m really glad to be a part of it.”

Sadler and Byron had a spirited battle for the championship as they raced each other for position for several laps. The two had contact at least once, and it took Sadler until 36 laps remaining to get past Byron. But Byron came charging back, and the two again raced aggressively for position with nine laps remaining.

Sadler was held up by Ryan Preece, who was trying to win the owner championship for Joe Gibbs Racing, and Byron passed him for good with nine remaining as Sadler was stuck in the top lane behind Preece.

As the laps wound down, Sadler grew more aggressive and hit the wall. After fading to eighth, Sadler angrily charged toward Preece on pit road.

“He cost us a championship and he’s not racing anybody,” said Sadler. “It’s just devastating to me to have one taken away from me like that.”

Sadler has now finished second in the standings four times in the last seven years.

Preece argued he was racing for position — he finished fifth — and Gibbs. But he felt horrible to have played a role in the title race.

“If there’s a person you don’t want to cost a championship to it is Elliott Sadler,” said Preece. “It’s not where I want to be right there. I can’t take it back.”

Cole Custer, meanwhile, easily won his first career Xfinity Series race. It came a week after he was eliminated from the playoffs. He had leads of up to 15 seconds as he was out front for all but 15 of the 200 laps.

The Custer race victory was a win for Ford, which has so far won both the Truck Series and Xfinity Series races on a weekend it sponsors. Ford has two drivers racing for the Cup championship on Sunday in Kevin Harvick and Brad Keselowski, and Ford has not won a Cup title since 2004.

The driver championship, though, went to Chevrolet. That was a given before the race because all four finalists were in Chevys.

It’s the second championship for JRM, which won its first title with Chase Elliott in 2014. Elliott graduated to the Cup Series.

, and Byron is taking over the No. 24 at Hendrick Motorsports next season.

Byron is a rapid climb through NASCAR’s ranks, and has gone from an 18-year-old rookie in the Truck Series last season, to Xfinity Series champion next season, to Jimmie Johnson’s teammate next year.

He probably should have two titles, too.

Byron was the strongest driver in the Truck Series last year but was eliminated from the playoffs a week before the championship when his engine blew at Phoenix. He responded by winning the finale, when he had nothing but pride on the line, the next week at Homestead. That had been Byron’s seventh victory in the series.

Byron settled for four wins this season, but he and his JRM teammates were statistically the class of the field all year among the Xfinity Series regulars.

Byron finished third to win the title. Allgaier was 12th and Hemric was 34th, 13 laps down.

Byron, who grew up in Charlotte, North Carolina and trick-or-treated at the houses of Hendrick, Johnson and Jeff Gordon, is the newest alumni of JRM drivers who graduated to top Cup rides. Elliott is at Hendrick, Brad Keselowski is racing Sunday for the Cup title, as is Martin Truex Jr., who won two Xfinity Series titles under Earnhardt Jr.’s first company, Chance 2.

“William did a great job running an awesome race to be as young as he is, he drove like a veteran,” Earnhardt said. “I know Elliott is probably really disappointed. It’s hard to watch any of your guys lose one, but at least we will be taking the trophy back to Mooresville tonight.”