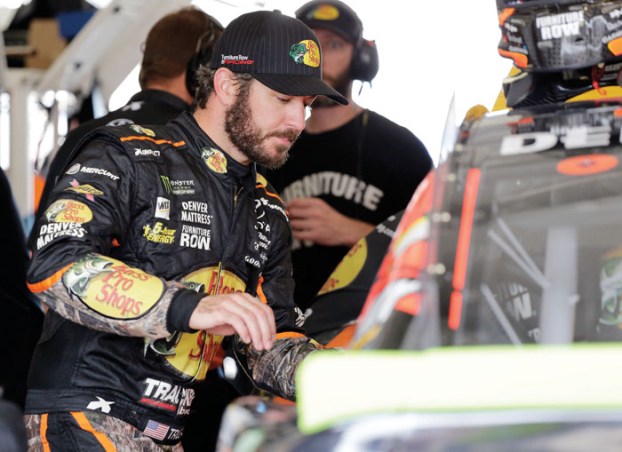 HOMESTEAD, Fla. (AP) — NASCAR has spent so much time this year ushering in a new generation of fresh-faced, young drivers. Now that it’s championship time, it’s the same old — really old — in the championship four.

The finalists for NASCAR’s championship race Sunday at Homestead-Miami Speedway are veterans looking to cement their place in history.

Kevin Harvick, who turns 42 next month, has 609 races, 17 seasons and the 2014 championship on his resume . Martin Truex Jr. is 37, a NASCAR journeyman with two second-tier titles and a favorite for the first time to win the Cup championship.

Kyle Busch started so young , he was sidelined to meet the minimum-age requirement of 18. Nearly 15 years later, he’s the 2015 champion and has nearly 200 victories in NASCAR’s three national series. Brad Keselowski has the least amount of time in the Cup Series among his rivals, but he’s 33, has a 10-year career and was the 2012 champion.

So Ryan Blaney, Chase Elliott, Kyle Larson and Austin Dillon will have to wait their turn. The high-profile stars of NASCAR are the show Sunday.

The highest finisher of the four contenders will take the title, and few expect anyone from this bunch to be rattled.

“These guys are (not) going to cave in and give up on what they’re doing,” Harvick said. “Three of us have won championships, and Martin has won a lot of races this year. Our intention is to go down there and win the championship, and I think if you’re one of those four and you don’t have that mentality, you’re not prepared for what you’re getting into.”

Indeed, Sunday has the makings of one of the better showings in NASCAR’s championship history.

Truex has won seven races this year and leads the series in nearly every statistical category. He has been the fastest of the contenders all weekend, and anything short of a victory would be a deflating end to a dream season.

Truex and the Denver, Colorado-based Furniture Row Racing team have excelled through adversity all season: Truex’s longtime partner, Sherry Pollex, had a recurrence of ovarian cancer; a mechanic died of a heart attack the night before Truex’s win last month at Kansas; and team owner Barney Visser is sidelined in Colorado because of emergency heart surgery a week ago.

Then Truex scraped the wall during Saturday practice and his crew — with a borrowed mechanic from Toyota teammate Busch’s team — had to hammer away any damage.

“The teamwork has been amazing all year long, and that’s what’s got us to this point, both of us really,” Truex said.

Dale Earnhardt Jr., who will retire from full-time racing after Sunday , is openly rooting for his hunting buddy. Earnhardt gave Truex his start in the sport, and Truex went on to win a pair of second-tier titles driving for Earnhardt’s team.

“Drivers have such big egos, all of us do, but Martin is not on that list,” Earnhardt said. “He just doesn’t abuse the opportunity and what the sport has provided him. I just think that says so much about his character as a person and a man.

“I don’t know how you put into words what it would mean for him to win. It is bigger than words. It would be popular among his peers and around the garage and the industry for sure because everybody knows what kind of person he is. I think that whole team has that reputation.”

Busch and Truex both drive Toyotas, and this championship finale is between them and a pair of Ford drivers. For Harvick, it is his first year in the partnership between Stewart-Haas Racing and Ford and gives the organization the chance to become the first since Cale Yarborough in 1978 to win in the inaugural year with a new manufacturer.

The victory also would be the third championship for SHR since 2011, when Tony Stewart signed on as a co-owner.

Keselowski is seeking to give Team Penske a sweep of the two major American series — Josef Newgarden won the IndyCar title in September — and complete one of the best season in Penske history. The organization has 31 victories this year across all its racing programs.

A win by either Harvick or Keselowski would give Ford its first title since 2004.

But it is the Toyota camp that fiercely believes the championship belongs to them. Toyota drivers have won 15 of 35 races this year, seven of the first nine playoff races. And, the manufacturer is still stinging over last year’s defeat.

Toyota had two chances last season with Busch and Carl Edwards, and Edwards was on his way to the win when a late caution cost him the victory. He was in a violent wreck on the restart, Jimmie Johnson won a seventh title in a Chevrolet, and Edwards retired about two months later.

“It would be crushingly disappointing to not win Sunday,” said David Wilson, president of Toyota Racing Development. “I still go back to last year, and every time, I still get angry. I’m still angry right now.”

“We should be the favorites, but we all know it is one race, and you really have to detach yourself from your statistics. But to be honest, we will be very disappointed if we don’t seal this with a championship.”

By Joedy McCreary AP Sports Writer WINSTON-SALEM (AP) — The lead was about to slip away from Wake Forest when... read more