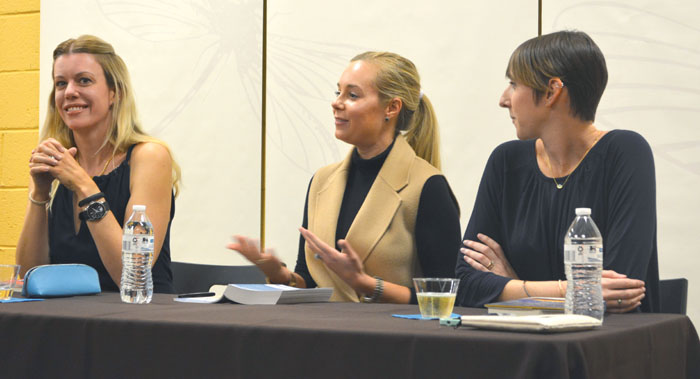 That’s why the Salisbury native moderated a panel discussion Thursday evening with two fellow writers at Flyleaf Books in Chapel Hill. Harvey, along with Katie Rose, Guest Pryal and Susan Bishop Crispell, are members of the Tall Poppy Writers, a group that works to unite authors with readers and support charitable causes.

The three all read from recent novels, and discussed how and why they write. They also take a lot of showers.

Cheering Harvey on from the audience were her parents, Paul and Beth Woodson of Salisbury, and her son, Will, a quite well behaved 6-year-old. Husband Will is joining the family this weekend for the UNC football game, so the event gave the close-knit family the perfect opportunity to spend time together.

Harvey just got the 2018 tour schedule for her upcoming novel, “The Secret of Southern Charm.” It’s five weeks instead of the promised three, but she’s gearing up for it already and trying to decide what the heck to pack, her mother, Beth, noted.

“Kristy has met the nicest people on tour,” she said. “It restores your faith in humanity.”

The first question Harvey asked her colleagues: “When did you know you wanted to be a writer?”

“I always did, my whole life,” said Pryal of Chapel Hill, who writes the Hollywood Lights series. Yet a bad professor drove her away from fiction writing for years and years, she said. “A good teacher can make all the difference in the world.”

In college, Crispell took a creative writing class because it sounded interesting, and she was hooked. Crispell, who lives near the coast, writes fiction sprinkled with bits of magic. Her latest novel is “The Secret Ingredient of Wishes.”

Harvey planned to be a doctor.

A high-school internship at the Salisbury Post changed her career path after she saw her byline on a story about a “super-terrific giant squash.” (At one time or another, all Post reporters must tackle “The Garden Game.”)

“I loved telling people’s stories,” Harvey said. She went on to major in journalism at UNC, and got an idea for a novel soon after Will was born.

The women discussed what a typical writing day looks like.

Pryal, who is temporarily homeschooling her children, said she writes first thing in the morning.

“Me, too,” Kristy said. “I travel a lot, so I write after I take Will to school. Writing is the fun part of what we do.”

Then there’s the checking emails, the social media posts, and all the other tasks that sometimes push writing to the side.

Crispell still works full-time, so she writes before work and in the evenings. She also said brushing her teeth or taking a shower seem to be her most creative times of the days. Her brother gave her a waterproof notebook that she uses almost daily.

“It’s the best gift ever,” she said, noting that she sometimes takes 20-minute showers because she’s in there writing.

Woodson said she also gets a lot of good ideas in the shower. “So if you want to be a good writer, take lots of showers!”

During the Q&A session, an audience member asked about the key to reaching their audiences.

Harvey said she recently had her first West Coast event.

“I have a really good audience in big cities,” she said. “And I asked them, ‘What is it that makes you pick up my books?’ They said, ‘We can’t even imagine something like this.’”

“People are interested in what is exotic to them,” Pryal said.

The women were also asked how they write. Pryal said she blocks out scenes, much like a screenplay. Crispell plans her books using outlines.

She was the kid in school that wrote the essay and then the outline, she said. “I write on a wing and a prayer and hope for the best.”