Greendale Tropical Fish: A legacy that lives on 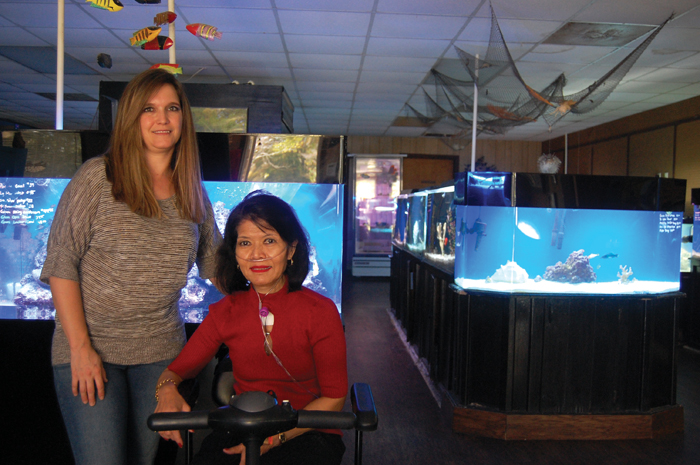 For Greendale owner Gay Greene, having a store full of aquariums means something more.

“This is a place where I can come and kind of, you know, be happy for a while,” Gay said.

This year was a difficult one for Gay. Her husband, George — who ran the store with her — died in February. Several months later, she was fell ill with pneumonia and had to be hospitalized for four months.

“We definitely care for (Gay) very much,” Robinson said. “I’m getting teary-eyed thinking about her health issues. But we’re very glad that she’s still with us. It was very scary for a while.”

For the months that Gay was in the hospital, Greendale was closed. Gay said that she thought she might have to sell it.

“But when I got home, I can’t stand to sit in the house all day and I don’t have no children or anybody,” Greene said. “So I said, ‘I got to reopen it.’”

The store reopened on Oct. 18 and, on Nov. 25, the store will celebrate its grand reopening with the community.

“This is her passion,” Robinson said. “I think this is what keeps her going, too.”

Robinson started working at Greendale more than a decade ago as a part-time employee.

“I’d been coming here for years. And I just wanted something to do, just to pass the time away. I love fish aquariums; (I) had them in my house,” Robinson said.

She worked there for about eight years before moving to Albemarle and starting to work at a dental office.

But, when Gay got out of the hospital, she asked Robinson if she would come and manage Greendale.

“She needed the help, and I think this store has a special place in many people’s hearts,” Robinson said.

Robinson now commutes an hour and a half every day from Albemarle to get to the store, which is located at 6465 Goldfish Road in Kannapolis — something she said she doesn’t mind.

Rufus started the business with four large ponds that he stocked with goldfish, which led to his street being named “Goldfish Road.”

His only son, George, was in the army for 20 years before he retired to work for IT&T — International Telephone and Telegram. That job led him to work in Thailand for five years.

In 1971, when he was living there, he met Gay, who was a trained Thai classical dancer.

The couple got married in 1978, after spending two years in Germany, and decided to go back to George’s hometown of Kannapolis for a while.

“And his father had diabetes and had a heart condition,” Gay said. “So he passed away in 1979. So we decide that we better settle down because they only have one son. He is the only son.”

For the next 38 years, Gay and George ran the store together. They wanted every customer who came in to feel like family.

“Like, you want people to treat you nice. That’s Thai custom,” Gay said.

“We want our customers to feel like this is a comfortable place to come, you know?” Robinson said. “We just like to educate and help as much as we can.”

Robinson said that she remembered when a preschool class took a field trip to the shop.

“And we would educate the kids and, you know, let them hold starfishes. And it just made their day to hold a starfish,” Robinson said.

“And we want people to just come in and look; we don’t mind that at all,” Robinson said.

She said that she thinks of Greendale as a legacy.

“It’s a passion for us that work here and we just like sharing our passion with others,” Robinson said. “As long as our customers are successful with their tanks, we’re successful.”

The grand reopening of Greendale Tropical Fish will be Saturday, Nov. 25. It will include door prizes, giveaways and light snacks.