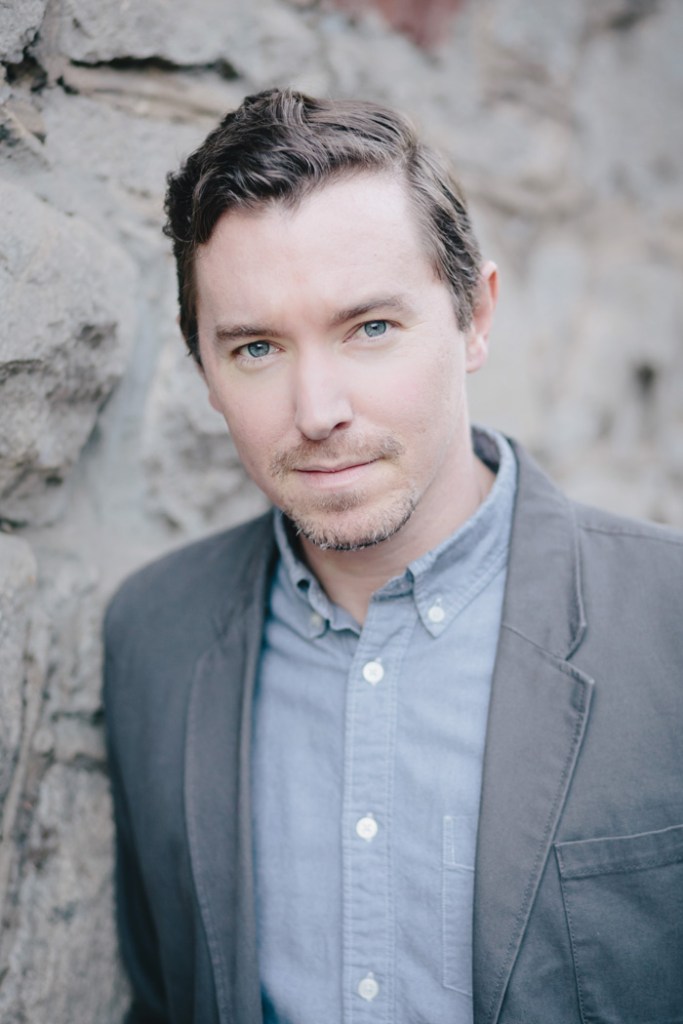 Jeremy Aggers says he was the dorky kid in elementary school who actually enjoyed being called on to read. Picture little Jeremy, his hand thrust in the air, an invisible thought bubble over his head: pick me!

For such a smart little whippersnapper, reading books was a dream job. And now, Jeremy is living the dream – as an audiobook narrator.

Jeremy grew up in Salisbury the son of Fred and Marjie Aggers and now lives in Atlanta with wife Kristin, who works for Habitat for Humanity. A 2002 graduate of Catawba College, Jeremy is more than a great reading voice – he’s a well-known face in Atlanta live theatre.

But since 2012, many of Jeremy’s moving performances have been done in front of a microphone in a studio.

A number of Jeremy’s friends expressed surprise recently when he posted on Facebook that he’d tallied more than 200 invoices for audiobook narration in the past five years. He got into the business after seeing a friend’s social media post about an audiobook company seeking new talent.

“I wouldn’t be good at this,” the friend told Jeremy, “but you would.”

Jeremy auditioned for a historical fiction book about Elvis Presley. He didn’t get that job, but he was called back and offered a different assignment – a nonfiction book about the philosophy of the world of the Avengers.

Because he was a professional singer songerwriter at the time and wanted his music to pop up when someone Googled his name, he decided to use a pseudonym for his audiobooks endeavor: Jeremy Arthur.

As it turned out, people enjoyed hearing Jeremy Arthur reading to them. More and more work came his way.

Jeremy doesn’t have to audition much now because he’s known for his impressive body of work. Sometimes, authors request him specifically.

While one might assume that audiobook narration is a sweet gig, it’s not an easy one – at least when it’s done well. A narrator doesn’t simply sit in front of a microphone and open a book to the first page. Reading well requires preparation. Part of that preparation is developing a deep sense of the characters in order to create a distinct and believable voice for each.

Jeremy reads from an iPad, using an app that allows him to annotate the text so he can better navigate tricky spots. He must know how to pronounce the names of people and places – which can be challenging. Books of fiction typically require at least three or four hours of prep time. Nonfiction requires even more time, sometimes longer than it takes to actually narrate the book, he says.

A theatre arts major at Catawba, Jeremy says his acting background has helped him “tremendously” in his audiobook work. He’s often praised in reviews for his engaging character voices – a skill he uses in his acting life as well.

Jeremy’s everyday voice is pretty accent-neutral, although he says it wasn’t always. He came across a home movie recently that featured a blacksnake-in-the-yard situation. Jeremy says he laughed to hear his childhood twang: “Daddy, look how beeeg it is!”

Being a long-time impressionist helps him develop voices, Jeremy says. He’ll take his sweet tea Matthew McConnoughey impression and tweak it for a particular sort of Southern guy. One reviewer described a character as sounding like Kris Kristofferson meets Sam Elliott.

For a British character, Jeremy might start with a Michael Caine impression to craft the vocal mannerisms of a British man.

Fantasy books “sort of make everybody British,” he says, and for one recent fantasy novel, “Empire’s Ghost,” he kept the “Game of Thrones” cast in mind to distinguish among the novel’s many characters.

With female characters, Jeremy takes a subtle approach – no falsetto. Is there a little gravel in her voice? Is her speech pattern rapid, or slowed down? These are the kinds of choices Jeremy makes when giving voice to a female.

Listeners notice and appreciate what Jeremy brings to a book, as in this audiophilemagazine.com review of “Nethergrim”: “Jeremy Arthur gives a thoughtful performance of this fantasy adventure …. Arthur’s deep timbre is a rewarding addition to this audiobook, giving it a magical sound. He creates a wide variety of characters, and his crisp clean narration is well paced.”

Reading non-fiction, which doesn’t have different character voices to liven it up, requires a conversational, upbeat tone. “You try to put a smile on it,” Jeremy explains.

Although nonfiction is in some ways harder to read, the upside, Jeremy says, is that he retains a lot of the information – so he’s learning as he works.

After Jeremy prepares, it’s time to go into the studio. An engineer assists, following along on his own iPad as Jeremy reads. Mistakes inevitably happen and are corrected. Generally, Jeremy says, two hours of studio work yields one finished hour of narration. So a seven-hour audiobook would typically require 14 studio hours.

Jeremy still works professionally as an actor and was recently singled out for special praise in the Atlanta Journal and Constitution for his role in Alliance Theatre’s “Shakespeare in Love”: “…Aggers, as the stagestruck stutterer Wabash, gives perhaps the night’s most moving performance.”

Jeremy will be travelling to Portland, Oregon in December for a continuing role in part two of a historical drama called “Astoria” that will be performed at Portland Center Stage.

Jeremy says he’s grateful for the acting education he got at Catawba College. He was one of many actors molded and mentored by the late James “Parkie” Parker.

“Parkie is the reason why I do what I do,” Jeremy says. “I use his knowledge every day. He was fantastic.”

If you’re interested in exploring Jeremy’s audiobooks, search for Jeremy Arthur at audiobooks.com