BC victorious over UConn in wind and rain at Fenway Park 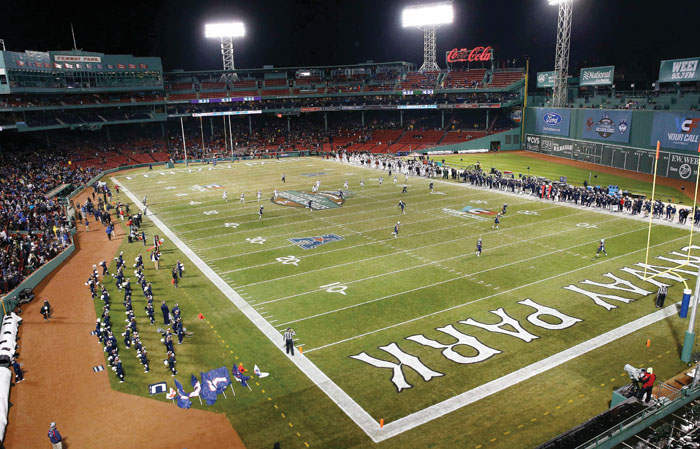 Boston College kicks off against Connecticut during the first quarter of an NCAA college football game at Fenway Park in Boston, Saturday, Nov. 18, 2017. (AP Photo/Michael Dwyer)

BOSTON (AP) — Boston College won a football game in a baseball park, and now the Eagles are going bowling.

AJ Dillon rushed for 200 yards and two touchdowns, breaking free on a 48-yard run and a 53-yard score on Saturday night as BC beat UConn 39-16 at Fenway Park to qualify for a bowl game for the fourth time in five years.

“It’s an experience I’m not going to forget,” said Dillon, a Connecticut native and New York Yankees fan who watched BC play Notre Dame at Fenway in 2015 and imagined himself breaking tackles in the ballpark. “(I was) saying, ‘Wow. It must be amazing to be on that field.’ I got the opportunity to soak it all in.”

Playing most of the game in a heavy rain, with groundskeepers patching the wet and worn-out turf most every timeout, the Eagles (6-5) opened a 36-point lead before UConn (3-8) scored two late touchdowns against the BC substitutes.

One week after BC quarterback Anthony Brown sustained a season-ending knee injury, Darius Wade completed 7 of 15 passes for 55 yards and a touchdown. He was helped by Dillon’s running, another 107 yards rushing from Jon Hilliman and two long interception returns, including a 65-yard pick-six by Taj-Amir Torres.

HOME ON THE ROAD

Although the century-old ballpark is less than four miles from BC’s Chestnut Hill campus, UConn was officially the home team. But the opportunity to use the Red Sox clubhouse didn’t help the Huskies avoid falling to 0-12-2 all-time against BC.

TUSCALOOSA, Ala. (AP) — Jalen Hurts passed for 180 yards and three touchdowns in a little more than a quarter and Alabama beat FCS team Mercer.

The Crimson Tide (11-0, 7-0 SEC, No. 1 CFP) raced to a 35-0 halftime lead in what amounted to a tuneup for the team’s biggest game. Now, Alabama heads to No. 6 Auburn with the winner of the Iron Bowl facing No. 7 Georgia in the Southeastern Conference championship game in Atlanta.

The Bears (5-6) also lost to Auburn 24-10 early in the season, when the Tigers committed five turnovers.

It was an FBS record 73rd consecutive win against unranked teams.

LAWRENCE, Kan. (AP) — Oklahoma’s Baker Mayfield threw for 257 yards and three touchdowns after getting dissed by the Kansas captains before kickoff.

Mayfield had tried shaking hands with Daniel Wise, Dorance Armstrong Jr. and Joe Dineen Jr. after the coin toss, but they stared stoically back at him. Mayfield quickly pulled his hand away, clapped a couple of times and set about burnishing his Heisman Trophy candidacy.

He threw TD passes to Rodney Anderson and Marquise Brown in the first half, then founded Mark Andrews late in the third quarter, which prompted more insults between Mayfield and the Jayhawks.

At one point, Mayfield lewdly grabbed his crotch while cursing across the field, and another time he yelled to fans behind his bench: “You have one win! Go cheer on basketball!”

The histrionics added at least some interest to a game that figured to be a blowout. The Sooners (10-1, 7-1) are fourth in the College Football Playoff ranking and clinched a spot in the revived Big 12 title game, while the Jayhawks (1-10, 0-8) have yet to beat a Football Bowl Subdivision foe.

AUBURN, Ala. (AP) — Darius Slayton caught a 50-yard touchdown pass late in the first half and Auburn pulled away to set up next week’s visit from No. 1 Alabama.

Auburn (9-2, No. 6 CFP) can earn a spot in the Southeastern Conference championship game by beating Alabama next week. ULM dropped to 4-6.

ATHENS, Ga. (AP) — Nick Chubb and Sony Michel led a dominant running game and Georgia bounced back from its first loss of the season.

Georgia (10-1, 7-1 Southeastern Conference, No. 7 CFP) returned to form after getting stuffed on the ground in a 40-17 loss to Auburn, a dismal performance that knocked the Bulldogs out of the top spot they held for two weeks in the College Football Playoff standings.

Barrett, playing in his last game at Ohio Stadium, threw for two touchdowns and ran for another score to help the Buckeyes (9-2, 7-1, CFP No. 9) dominate from the opening kick.

SOUTH BEND, Ind. (AP) — Brandon Wimbush threw for 164 yards and two touchdowns and ran for a score as Notre Dame rallied in the rain and wind to beat Navy.

Wearing throwback uniforms with the name Rockne on the back of every player’s jersey and helmets designed to evoke the leather tops from the era of Knute Rockne, one of the Fighting Irish’s most famous names, Notre Dame (9-2, No. 8 College Football Playoff) kept its slim national championship hopes alive heading into the regular-season finale next Saturday at Stanford.

LOS ANGELES (AP) — Sam Darnold passed for 264 yards and ran for a touchdown and Southern California persevered for its third consecutive victory over crosstown rival UCLA.

Ronald Jones II rushed for 111 yards and two touchdowns, and Michael Pittman Jr. returned a punt 72 yards for a touchdown on a spectacular trick play in the first quarter of the regular-season finale for the Pac-12 South champion Trojans (10-2, 8-1).

Barkley passed Lydell Mitchell for the record with his 39th touchdown.

Trace McSorley ran for a touchdown and threw for 325 yards on 24-of-36 passing with three touchdown passes for Penn State (9-2, 6-2 Big Ten). Mike Gesicki caught two scoring passes and became Penn State’s career touchdowns leader by a tight end with 13, and DeAndre Thompkins also had a touchdown catch.

Tennessee (4-7, 0-7) was playing its first game under interim head coach Brady Hoke after the firing of Butch Jones. The Volunteers must beat Vanderbilt next week to avoid their first eight-loss season in school history.

Isaiah Totten had 61 yards rushing and a touchdown for NC Central (7-4, 5-3). His 3-yard score pulled the Eagles within 21-10 with 1:16 left in the third quarter. A&M’s Noel Ruiz capped the scoring with a 31-yard field goal midway through the fourth.

CHAPEL HILL (AP) — North Carolina quarterback Nathan Elliott could feel the momentum, both in a game-changing second quarter Saturday and a possibly redemptive November for the Tar Heels.

Elliott, a sophomore making his second start, threw four first-half touchdown passes as UNC cruised past Western Carolina 65-10. The victory gives the Tar Heels (3-8) their first win streak of what has been a disappointing season, one that would look far better if UNC could continue the winning next weekend at rival N.C. State.

North Carolina scored 21 points in a span of 2 minutes, 46 seconds in the second quarter to take control against the outmanned Catamounts.

The result was an offensive eruption Georgia Tech was helpless to stop.

Shaun Wilson caught two touchdown passes and threw another, Brittain Brown ran for 116 yards and a score, and the Blue Devils kept their bowl hopes alive with a 43-20 victory over the Yellow Jackets on Saturday night.

Duke (5-6, 2-5 ACC) fell behind 14-3 early in the second quarter before dominating the rest of the way, including outscoring the Georgia Tech 23-0 in the second half to snap their losing streak.

Minshew’s 444 yards is the fifth-highest yardage total for a single game in East Carolina (3-8, 2-5 American Athletic) history. Minshew threw a 23-yard touchdown to Tahj Deans, Hussein Howe ran it in from 3-yards out and Minshew threw a 1-yarder to Jimmy Williams and the Pirates built a 21-0 lead with 9:06 left before halftime.

Hayden Moore responded on the following drive with a 75-yard touchdown pass to Kahlil Lewis to make it 21-6 after missing the point after, and Moore later threw a 10-yard score to JaQuay Savage to shave the deficit to 21-13.

Following a Pirates field goal just before halftime, Minshew threw a 95-yard score to Brown — the longest in school history — and a 22-yarder to Deondre Farrier and East Carolina was never threatened.

“When you break a six-game losing streak, it’s more than just a sigh of relief,” quarterback Daniel Jones said. “It was a lot of fun to play as we did as a team today and come out on top. “

Wilson caught swing passes of 11 and 16 yards from Jones for touchdowns and threw a trick-play, 4-yard touchdown on a jump pass at the line of scrimmage to tight end Daniel Helm.

Jones completed 18 of 26 passes for 177 yards and ran for 91 yards and a score to lead the Blue Devils’ rally. Brown’s contributions on the ground gave Duke a season-high 319 rushing yards.