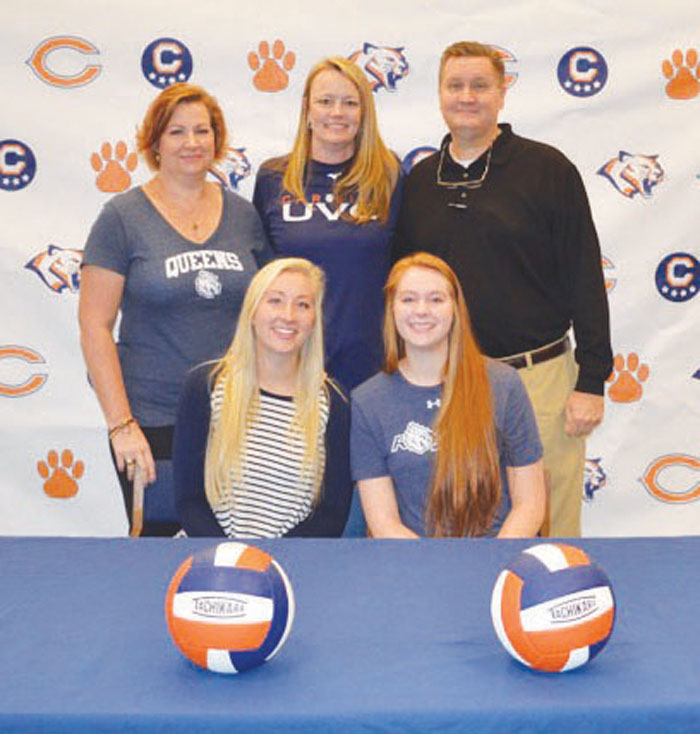 CHINA GROVE — Carson’s Lindsay Elmore got up early on Monday morning, so early that bagels were on the menu in the media center for her signing party with Queens University of Charlotte.

As a volleyball player, the 6-foot-1 middle hitter woke up as a sophomore. She didn’t scare anyone when she was a towering, timid freshman, but she frightened liberos right out of their sneakers with her thunderous spikes the last three seasons. Elmore was all-county as a sophomore and junior and obviously will be all-county for the third time when the 2017 team is announced.

“The big jump came between her freshman and sophomore seasons,” Carson coach Kelan Rogers said. “When Lindsay started out, I didn’t know how good she would be, but she started to block well as a sophomore and then the hitting power developed. With her power, with her size, with her blocking ability, she’s just an awesome player, and she should do very well at Queens.”

The Elmores are a tall, athletic family with a background rooted in hoops and soccer. Gary Elmore, Lindsay’s father, was an assistant men’s basketball coach at Campbell from 1991-95 and had a great seat in Greensboro in 1992 for a close-up look at Grant Hill, Christian Laettner and Bobby Hurley when the 16th-seeded Camels took on eventual national champion Duke in the opening round of  March Madness.

Duke smoked the Camels, 82-56, but that’s one of those family stories you can tell for a lifetime.

Lindsay recalls her family moving to Rowan County from Raleigh about a dozen years ago. Her older sister, Hannah, was getting into volleyball, so Lindsay wanted to try as well.

“I started playing in the fourth grade, and I was pretty bad,” Lindsay said with a laugh.

She improved gradually by competing for the High Rock Volleyball Club. She gives credit to coaches Jan Dowling, Trish Hester and Mackenzie White for helping her make strides.

By the time Lindsay got to middle school, Hannah, a 6-foot outside hitter, was starring for Carson volleyball.  Hannah had transformed into “Hannah, the Hammer,” and Carson volleyball was doing unprecedented things. In 2012 and 2013, Carson won the Western Regional and was 3A state runner-up.

The same fall that Hannah moved on to Brevard (for a fine career), Lindsay arrived at Carson. Expectations were sky-high for her because she was tall and because she was an Elmore, but she was a different player than her sister had been. She wasn’t as excitable or as aggressive. Carson went 17-10 in 2014, the worst season in Rogers’ nine years at Carson.

But Lindsay made that quantum leap forward as a sophomore and Carson got back to 28-3 and shared the South Piedmont Conference championship with Cox Mill. Lindsay topped 200 kills and 100 blocks and was a major part of that comeback.

Lindsay credits the elevation of her game to Rogers and to the Charlotte-based Carolina Union Volleyball Club.

“Carolina Union really helped me with the technical aspects of my swing,” Lindsay said. “I started playing faster and playing smarter.”

Lindsay’s progress continued at Carson as a junior in 2016.  Her kills went up and her killing efficiency increased. She helped Carson go 23-6 against a difficult schedule that included three tussles with 3A state champion Cox Mill.

Lindsay was on the radar for several colleges.

“A lot of programs were attracted to her because she wants to win and her teams won in high school and in club ball,” Bianchin said. “Schools liked her not just because she’s a good player but because she’s a great teammate. She has a lot of competitive intensity and she’s one of those girls who can get all her teammates to believe in each other.”

Lindsay preferred a small school in the area. Her choice basically came down to Queens or Belmont Abbey. Part of the reason she picked Queens was that it’s a South Atlantic Conference school that tackles Catawba, Wingate (where two of her Carolina Union teammates are headed) and Lenoir-Rhyne. All the Elmores are familiar with the SAC environment and with SAC competition because Brevard was in the SAC for three of Hannah’s four seasons.

Queens has a successful program (21-7 entering Friday’s SAC tournament game against Wingate), and Lindsay expects the winning to continue.

“Queens is good, and I know the coaches there are going to push me,” Lindsay said. “I want to be as good as I can be.”

Lindsay’s senior season at Carson was her strongest.The Cougars went 23-5 against a challenging schedule that included 3A champ North Iredell, rival West Rowan and 4A powers Reagan, Davie County and Hickory Ridge. Carson finished the season ranked ninth in the state by MaxPreps. Lindsey topped 300 kills for the first time, while contributing career highs in blocks and digs.

She totaled 42 kills in three intense matches with West Rowan (Carson won two). She had more than 20 kills in two matches this season. As a senior, she left her stamp on the Carson program. Now she could do the same thing for Queens, where she’ll work toward a career in accounting or law when she’s not on the court.

Rogers will have most of his team back next fall, but he’ll miss that 6-1 force the Cougars had in the middle. The 2018 season will be the first time Carson hasn’t had an Elmore on the floor since 2010. That’s going to be an adjustment.

“Lindsay grew so much as a player during her years in the program,” Rogers said. “She’ll definitely be missed.”