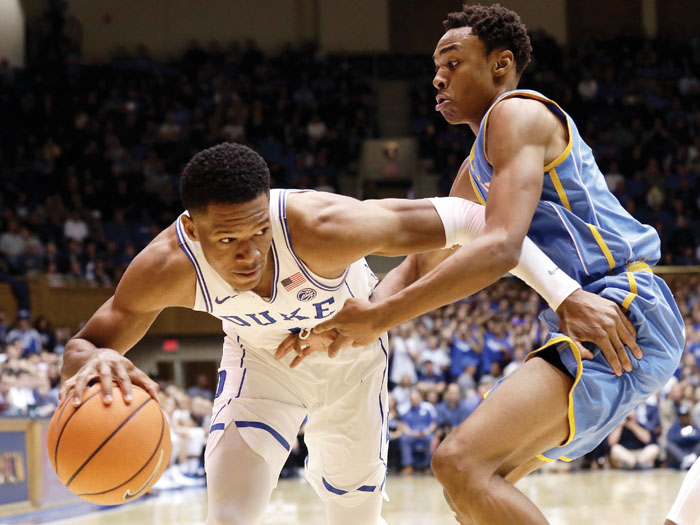 DURHAM (AP) — No. 1 Duke proved this week it’s talented enough to beat the best team on its schedule — but not so dominant that it can take one of the worst for granted.

The Blue Devils beat Southern 78-61 on Friday night behind 20 points and 11 rebounds from Wendell Carter Jr.

“We just didn’t come ready to play,” Carter said. “I can’t really speak for everybody, I don’t know if everybody was energized or not or if people were hurt or not. Just as a team, we didn’t play as a unit. We starters had an opportunity just to be selfish, and that’s not the way to go. We’ve got to take every game seriously, and we did not do that tonight.”

Coming off a victory over No. 2 Michigan State three nights earlier, Duke showed several classic symptoms of a letdown — in part, coach Mike Krzyzewski explained, because the Blue Devils didn’t practice the previous two days due to NCAA time-management rules.

The Blue Devils finished with a season-high 15 turnovers, shot just 4 of 20 from 3-point range and for a while struggled to keep Southern off the offensive glass before regrouping to finish with a 51-34 rebounding advantage.

“There was something missing tonight,” Krzyzewski said.

Gary Trent Jr. had 10 rebounds but was 3-of-11 shooting for Duke, which never led by fewer than 10 points in the second half, but also had trouble putting Southern away, not pushing its lead into the 20s until the final 5 minutes.

Jamar Sandifer had 14 points and Torrey Mayo added 11 to lead the Jaguars (0-4) — whose resume included a 102-55 loss to Illinois, an 86-58 loss at Missouri State and the No. 319 spot in an unofficial replication of the RPI formula.

They gave the Blue Devils about 15 minutes’ worth of serious headaches before Trent hit two 3-pointers during a 15-3 run late in the first half that pushed Duke’s lead into double figures to stay.

Southern: The Jaguars open the season with five road games in 10 days, and this should have been the most daunting. Instead, Southern made it competitive for far longer than expected by taking advantage of the Blue Devils’ numerous turnovers, repeatedly sending Bagley — who entered as a 22 percent free-throw shooter — to the line and holding their own on the glass.

Duke: This should lead to quite the educational film review session for Krzyzewski, his assistants and players. For a team that has reasonable Final Four expectations, the tape will show plenty of teachable moments — starting with the turnovers, many of which were unforced. Because the Blue Devils took the previous two days off, Krzyzewski said they will practice Saturday and Sunday.

“They thought it would be a lot easier than it was, and that’s on us, too, to make sure,” Krzyzewski said. “We’re all responsible for it. The other thing is, we won. We won. So that’s a good thing.”

THE EYES HAVE IT

Allen was poked in the left eye when he was fouled by Southern’s Chris Thomas with 1:08 left in the half. Allen hit 1 of 2 free throws before heading to the bench for treatment with the eye swelling almost immediately. He was back to start the second half. Three nights earlier, Bagley didn’t return after he was poked in the eye during the Michigan State game.

Southern was still in the game, trailing just 30-27 with about 5 minutes before the break when Sandifer put up a jumper in the lane. Bagley blocked it all the way to midcourt and Allen chased it down, whipped the ball behind his back and converted a left-handed layup that energized what had been a morose Cameron Indoor Stadium.

Associate head coach Jeff Capel was back on the Duke bench. He didn’t make the trip to Chicago for the Michigan State game after his father, former Old Dominion coach Jeff Capel Jr., died less than two years after he was diagnosed with ALS. He was honored with a moment of silence before tipoff.

Southern: The Jaguars stick around Durham to face N.C. Central on Sunday.