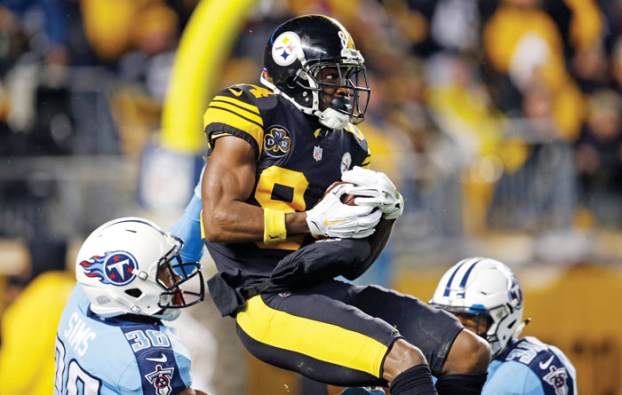 Steelers pull away from Titans in second half PITTSBURGH (AP) — Ben Roethlisberger threw for 299 yards and four touchdowns, three to Antonio Brown, and the Pittsburgh Steelers pulled away from the Tennessee Titans in a 40-17 victory on Thursday night.

Running the no-huddle offense extensively for the first time all season, Roethlisberger completed 30 of 45 passes to help the Steelers (8-2) win their fifth straight.

Brown caught 10 passes for 144 yards and the three scores, including an acrobatic grab in the back of the end zone in which he pinned the ball to his helmet before bringing it in to put Pittsburgh up 20 in the fourth quarter.

Marcus Mariota ran for a touchdown and threw for another but also was picked off four times as the Titans (6-4) saw their four-game winning streak come to a crashing halt. Mariota finished 22 of 33 for 306 yards but was under pressure much of the night, absorbing five sacks and rarely finding room to move outside the pocket.

Still, Tennessee appeared to be in it when Mariota hit Rishard Matthews with a 75-yard touchdown pass on the first play of the second half to get to 16-14 but Pittsburgh’s long-sputtering offense finally came to life.

Roethlisberger dropped some very not subtle hints that he wanted the freedom provided by the no-huddle after the Steelers used it to pick the Colts apart during the winning drive last Sunday in Indianapolis.

Pittsburgh opened in the no huddle and needed just six plays to take the lead as Roethlisberger took advantage of a free play and hit Brown with a 41-yard rainbow. Mike Hilton then returned Mariota’s interception to set up the first of Chris Boswell’s four field goals and the Steelers appeared on the verge of another prime-time blowout at home.

The blowout did eventually arrive, just not quickly.

The offense ground to a halt for the rest of the half, held in check by former defensive coordinator Dick LeBeau. The Hall of Famer spent 12 years building a defense that helped Pittsburgh to a pair of Super Bowl victories before being ushered out in favor of protege Keith Butler in January, 2015. The 80-year-old is in the middle of his latest project with the steadily improving Titans.

Yet the gap between Tennessee and Pittsburgh remains significant. The proof came after Mathews’ long catch-and-run appeared to give the Titans momentum.

The Steelers, with Roethlisberger deftly at the controls, finally showcased the firepower they’ve only flirted with this season. The 35-year-old who has struggled with his accuracy at times was near perfect over the final 30 minutes. He finished 20 of 23 for 185 yards in the second half as Pittsburgh’s $92-million offense sprang to life but scoring on four straight possessions.

Roethlisberger found a leaping Brown for a 5-yard score to put Pittsburgh up 23-14, executed a perfect play-action fake that the goal line before flipping it to a wide-open Jesse James for a 1-yard touchdown and put the Titans away with a lob to the back corner of the end zone that Brown somehow hauled in from 10 yards out that made it 37-17.

Pittsburgh rookie JuJu Smith-Schuster knelt down and bowed to Brown during the giddy celebration. Hard to blame the 20-year-old. For the first time all season, the Steelers put it all together and looked every bit like a team with a legitimate threat to play deep into January and beyond.

FALCONS MAY BE CATCHING BATTERED SEAHAWKS AT THE RIGHT TIME

SEATTLE (AP) — Coming off their most impressive victory of the season, the Atlanta Falcons may have lucked out on the timing for one of their toughest road trips.

The Falcons won’t be seeing the likes of Richard Sherman, Cliff Avril and likely Kam Chancellor when they face the injury-riddled Seattle Seahawks on Monday night.

Atlanta (5-4) is coming off its most complete performance in a 27-7 domination of Dallas last week. Adrian Clayborn was the star with six sacks of Dallas quarterback Dak Prescott.

Matt Ryan continued his streak of 200-yard passing games and threw a pair of touchdowns.

It was the type of performance Atlanta had struggled to find with consistency this season, and why the Falcons are two games behind in the NFC South race.

And while coming to Seattle anytime of the year is a challenge, the Falcons may be catching the Seahawks (6-3) at the best possible time.

Seattle is coming off an extended break, but it was after a costly win over Arizona lowlighted by the loss of Sherman to an Achilles tendon injury. Sherman, Avril and C.J. Prosise are all on injured reserve. Earl Thomas and Jarran Reed both have hamstring injuries, but are optimistic they’ll play.

New left tackle Duane Brown, the addition meant to stabilize Seattle’s offensive line, injured his ankle in his second game with the Seahawks and will be a game-time decision. And now there are concerns with the health of Chancellor after suffering a stinger late in the win over Arizona.

While Chancellor hasn’t been ruled out, Seattle is planning on Bradley McDougald starting.

“We are just very fortunate that we have the depth that we have and I’m going to count on them to play really well, and I’m not counting on anything taking a backward step,” Seattle coach Pete Carroll said.

Here’s what else to know about the Falcons and Seahawks meeting for the third time in 13 months:

MISSING SHERMAN: Jones has said he enjoys his matchups with Seattle, so it was no surprise when he said he’d miss not being able to play against the injured Sherman this week.

“It’s always fun,” Jones said. “We always have a good time because we always battle each and every play. Sherman is a guy who’s going to try to stay on me the whole game. A lot of times guys start playing me and then they get off and get some help. Sherman is not one of those guys.”

FILLING IN: The Seahawks will lean heavily on Jeremy Lane to step in for Sherman. Lane was originally traded to Houston as part of the Brown deal, but failed his physical with the Texans and was returned to the Seahawks. It’s turned out to be a huge benefit for Seattle to have an experienced veteran to take over with Sherman now lost for the season.

Seattle also signed veteran Byron Maxwell to add depth in the secondary. Maxwell started his career in Seattle before spending time in Philadelphia and Miami.

SARK RETURNS: The trip to Seattle brings Atlanta offensive coordinator Steve Sarkisian back to the Pacific Northwest. Sarkisian was the head coach at nearby Washington from 2009-13 before leaving for the head job at USC.

Sarkisian is highly regarded for helping turn around a downtrodden Washington program, but was also somewhat lamented in Seattle for never being able to get the Huskies into contention for conference titles.

Sarkisian’s debut in Atlanta is also being somewhat lamented. The Falcons have been inconsistent offensively and are averaging nearly 12 points per game less than a season ago when Kyle Shanahan was coordinating. Shanahan now is head coach in San Francisco.

“Part of the thing that we’ve really dialed in on over the last couple weeks of situation football: third down and the red zone,” Quinn said. “We’ve really tried to put in some extra work in those areas knowing that that’s what needed some attention.”

The Atlanta offense hasn’t recaptured its high-scoring touch from its Super Bowl season. The Falcons are averaging 21.9 points to rank 15th after averaging 33.8 points last season.

FINDING JIMMY: The Seahawks have suddenly made finding Jimmy Graham in the red zone a priority. Graham has six touchdown receptions in the past five games, including two TDs in the win over Arizona. It was his 15th career multi-touchdown game and second in three games after Graham had two TD catches in the win over Houston. Graham has already matched his touchdown total from the entire 2016 regular season.