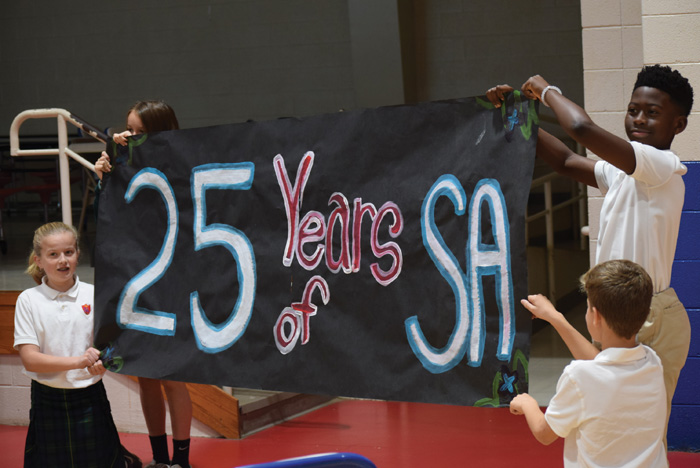 SALISBURY — How do you ensure that a dream lasts a quarter of a century?

Thursday morning, family and friends of Salisbury Academy gathered to celebrate a dream that became a reality and the school’s 25th birthday. Head of School Beverly Fowler called the anniversary “a great day of celebration.”

School founder Georgi Goss was the guest speaker during the school’s regular chapel service. Goss left the school to spend more time with her family in the early 2000s.

Some things have changed, she said, like the newer building on U.S. 601. But some things — like the uniforms, the dedicated teachers and the smiling faces of students — haven’t changed at all, she said.

Goss started Salisbury Academy in 1993 because she wanted a different education experience for her three children. She said she wanted them to have access to a curriculum that had more focus on art, music, multidisciplinary projects and experiential learning.

“Back when I started the school, there wasn’t any of that that my children participated in,” she said. “I just wanted something different for my children.”

Only 13 children attended Salisbury Academy the first year, attending classes in a space at Haven Lutheran Church. But the school flourished, doubling and tripling the number of students and eventually prompting Gross and other organizers to add as many as four grades in a single year.

Gross said she always had confidence the school would grow.

During her time with Salisbury Academy, she loved getting to know the other parents and families.

“That was the best part of this,” she said.

Digna Freirich also attended Thursday’s ceremony. Her daughter was one of the original 13 students.

In 1993, Freirich’s daughter was just getting ready to start school at Overton Elementary. Then Freirich met Goss at a tennis lesson.

“And she mentioned to me, ‘I’m going to start a school,’” Freirich remembered.

When Freirich brought the subject up to her husband, the family decided to take a chance — and they never looked back.

Because of the small number of students and families, Salisbury Academy formed its own family-like bonds.

“Everybody was close,” she said.

It’s an atmosphere that Freirich said she still sees in the school today.

Third-grade teacher Nathan Wyatt also spoke about his experiences at Salisbury Academy. Wyatt began attending the school as a junior kindergarten student in its early days, before it had a new building.

When he graduated from Catawba College, Wyatt jumped at the opportunity to teach at a school that had given him so much.

“It’s not a coincidence I wanted to come back and teach at Salisbury Academy,” he said.

As a student, he’d learned a lot on regular field trips or class activities that made lessons far more than words on a page. He remembers participating in sword fights while studying gladiators, launching rockets in science class and digging for fossils while learning about dinosaurs.

Things haven’t changed all that much since he graduated, Wyatt said. The school still has dedicated teachers, passionate community volunteers and eager parents.

In honor of its 25th year, Fowler presented students with a present: a Jaguar mascot to dance on the sidelines at games and bring school spirit to pep rallies.

And at Salisbury Academy, the dream lives on.

“I had the time of my life starting this school,” Goss said. “Not everyone has the opportunity to make their dreams come true.”