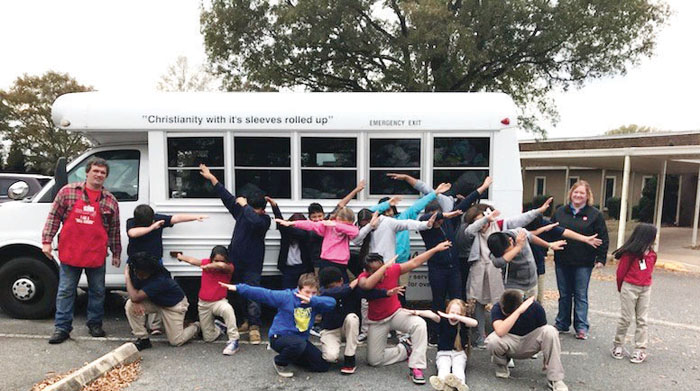 Jerry and Melissa Cline of the Salvation Army strike a pose with the fourth-grade students of teacher Hannah Burleson outside Knollwood Elementary School. Led by Burleson's class, the school held a clothing drive for the Salvation Army. Mark Wineka/Salisbury Post

SALISBURY — Knollwood Elementary School conducted a drive that collected several hundred clothing items and shoes that were donated to the Salvation Army in Salisbury.

The clothing drive was organized by Hannah Burleson, a fourth-grade teacher. Her class and the rest of the school participated.

The students were moved to do something after seeing those affected by recent hurricanes and the long-term recovery efforts still going on.

“The students decided to make a difference right here in Rowan County,” said Capt. Bobby Carr of the Salisbury Corps of the Salvation Army.

The clothing and shoes donated will be used to fill clothing vouchers for those in need and to benefit the Salvation Family Store in Salisbury, which helps fund the organization’s social service assistance programs in Rowan County.