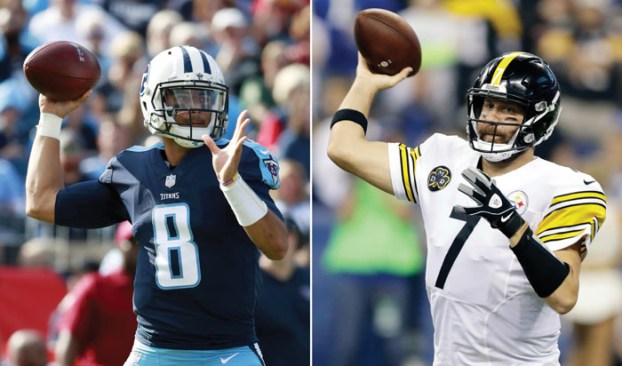 FILE - At left, in a Nov. 5, 2017, file photo, Tennessee Titans quarterback Marcus Mariota (8) looks to throw a pass against the Baltimore Ravens during an NFL football game in Nashville, Tenn. At right, in a Nov. 12, 2017, file photo, Pittsburgh Steelers quarterback Ben Roethlisberger (7) throws against the Indianapolis Colts during the first half of an NFL football game in Indianapolis. Stylistically, the Steelers may be the most unimpressive 7-2 team in the NFL. It's a problem the AFC North leaders can live with, though they will be tested on Thursday against Tennessee (6-3). The Titans have won four straight and can send a message they're a legitimate threat. (AP Photo/File)

PITTSBURGH (AP) — The Pittsburgh Steelers have a commanding lead in the AFC North and are in a two-way race with New England for homefield advantage throughout the AFC playoffs as Thanksgiving looms, exactly where they expected to be all along.

While the Steelers (7-2) are hardly apologizing for their best start in head coach Mike Tomlin’s decade-long tenure, they’d love a little bit of style to go with all that substance. Narrow escapes such as last week’s 20-17 victory over struggling Indianapolis are starting to get a little old.

The $92 million offense that includes the highest-paid (and most productive) wide receiver and running back in the NFL is averaging just 20 points a week. The Steelers are one of just five teams that haven’t reached the 30-point plateau all season.

“We’re still saying we have to get better but eventually we’ve got to do it,” star wideout Antonio Brown said.

Like Pittsburgh, surprising Tennessee (6-3) is looking to send a message that their progress in coach Mike Mularkey’s second season isn’t a mirage.

The Titans bring a four-game winning streak into Thursday night’s meeting in Pittsburgh, though the four victories are against teams that are a combined 10-27.

“I think it’s going to be a big measuring stick for our team to see where we’re at,” Tennessee tight end Delanie Walker said.

Despite the short week, the two sides are hardly strangers. Mularkey and five other members of the Titans staff either played or coached for Pittsburgh — or in the case of Mularkey, did both.

That includes Hall of Fame defensive coordinator Dick LeBeau , who served as the architect for a Steelers defense that reached the Super Bowl three times in six seasons between 2005 and 2010.

Though LeBeau was pushed out in favor of protege Keith Butler in January 2015, the lessons LeBeau imparted still resonate on a young but rapidly maturing defense that is second in the league.

“Even our goals and stuff, they’re still Coach LeBeau’s and the way he wanted it because our coaches were under him. I think his imprint, his lasting imprint is a lot of what our defense wants to reach.”

LeBeau is in the process of working his magic again in Tennessee as the Titans pursue their first playoff berth since 2008 .

“There are so many stories I have that I’ll cherish but this isn’t a funeral or anything,” Heyward said. “Coach LeBeau is going to be out there trying to kick our (butt) so we got to be ready.”

Tennessee quarterback Marcus Mariota will play his fourth prime-time game since entering the league in 2015. Playing under the lights seems to agree with him. Mariota has a 105.4 passer rating with three touchdowns and only one interception, the fifth-highest in the NFL for quarterbacks with a minimum of three prime-time starts. Mariota trails only Ben Roethlisberger with a league-best 121.7, Atlanta’s Matt Ryan (109.3), New England’s Tom Brady (106.6) and New Orleans’ Drew Brees (105.5).

COTY AT THE CORNER

Pittsburgh’s good fortune when it came to injuries ended last week when cornerback Joe Haden fractured his left leg in the first quarter against Indianapolis. While the Steelers are optimistic Haden can return at some point, they’ll turn to veteran Coty Sensabaugh to fill in a secondary that’s second in the NFL in fewest passing yards allowed. Sensabaugh, who played for the Titans from 2012-15, was in line to be the starter coming out of training camp until Haden unexpectedly became a free agent.

Roethlisberger has been campaigning publicly for the Steelers to use the no-huddle offense more in an effort to develop a rhythm. He may get his wish after Pittsburgh used it effectively on the game-winning drive against the Colts. Having just three days to prep also could mean more run for the no-huddle because it simplifies things.

“It’s easier because that’s kind of something that you have the no-huddle in and it’s been in since day one,” Roethlisberger said. “So rather than trying to install a bunch of new plays you go with what you know and have been doing for a long time.”

NBC plans to use “SkyCam” as its primary camera angle for the first time. The angle channels the popular “Madden” video game franchise, giving viewers a bird’s eye view from above and behind the quarterback as a play develops. Networks have typically saved the “SkyCam” angle for replays.

There will be pop-up graphics at the completion of each play to give viewers specifics on the play, such as yards gained. NBC will revert to the more traditional sideline angle when the situation dictates.

“Thursday night has kind of always been the NFL’s laboratory for innovation, experimentation, whatever you want to call it,” producer Fred Gaudelli said. “We just felt like this is gonna be a worthy test.”