For test-tube twins, a new chapter: One of them is pregnant 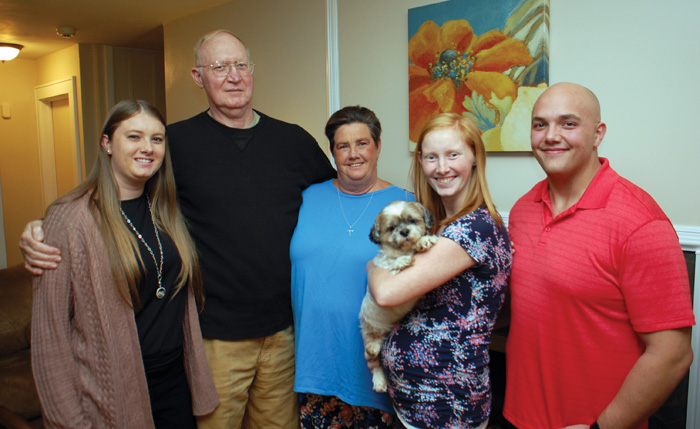 Devan Purvis, Neal Purvis, Lynne Purvis, Heather Resino, her dog Bit and husband John Resino pose for a picture in the Resinos' house in Spencer. Neal and Lynne relied on in vitro fertilization to conceive their twin daughters in 1992. Now Heather is pregnant and due in February. Mark Wineka/Salisbury Post

SPENCER — Heather Resino and Devan Purvis are miracles and always will be.

Now another miracle is unfolding. Heather is pregnant and due in February. She and husband John Resino are expecting a little girl. They have a name picked out — Kayleigh Anne — and granddad-in-waiting, Neal Purvis, already has painted the baby’s room.

Likewise, Devan highly anticipates the arrival of Kayleigh Anne, who will have a T-shirt that proclaims, “When my mom says ‘No,’ my aunt says ‘Yes.'”

There’s plenty of back story behind Kayleigh’s pending arrival. Part of it retreats 25 years to the birth of Devan and Heather, fraternal twins who were conceived in a petri dish, implanted in their mother Lynne’s womb and — against tough odds — carried to a full-term pregnancy.

In other words, they were test-tube babies.

According to the American Society for Reproductive Medicine, about 1 percent of U.S. infants are conceived through in vitro fertilization, which has contributed to approximately 5 million births.

In 1992, Lynne and Neal Purvis turned to in vitro fertilization pretty much as a last resort. For a dozen years, they had tried everything to have children. At one point, with the help of fertility drugs, Lynne had become pregnant. Despite five weeks of bed rest, she lost the baby to a miscarriage.

Lynne would try fertility drugs again, and for the couple there were more tests, pills, injections, blood work, ultrasounds and five surgical procedures. But nothing worked until Dr. Jeffrey Deaton at Wake Forest University Baptist Medical Center entered the picture.

Deaton thought Lynn was a good candidate for in vitro fertilization.

The cost and the chances it would be successful were not in the Purvises’ favor. The procedure carried a price tag of $8,000 and was not covered by the couple’s insurance. It also was a one-shot deal, so to speak, and Deaton said the chances in vitro fertilization would work for Lynne were 15 percent to 20 percent.

But Lynne desperately wanted to carry a baby, feel it move and bring it into the world. She and Neal borrowed money and accepted gifts from friends and family to pay $4,000 up front, and they set up a payment schedule with Baptist Hospital to address the other $4,000.

What followed were interviews with a psychologist, antibiotics for both of them, specimens from Neal, shots for Lynn and a close watch of the calendar.

On Jan. 29, 1992, Deaton retrieved eight eggs from Lynne with a needle and syringe. Five were fertilized in a petri dish, and two days later they were placed in Lynne’s womb. At three weeks, an ultrasound revealed twins. At six weeks, the Purvises heard the heartbeats of Devan and Heather for the first time.

Lynne, then 35, amazingly had one of the most normal pregnancies she and Neal could have hoped for. She would carry the twins for 39 weeks (plus two days) and surprised all of her doctors with how active she was up to delivery.

“Dr. (Mel) Parada said I would be out of work by June,” Lynne says.

But she kept working — and playing — into the fall. At eight months’ pregnant, Lynne was still diving into the neighborhood pool, working at the fair, walking in a parade and helping out at the local Jaycees’ pancake breakfast.

She intended to have her twins naturally, until ultrasounds showed that Devan was turned around and blocking things. The girls were born Oct. 19, 1992, by Caesarian section, and each weighed more than 6 pounds.

A week after their births, Lynne noticed Devan had a bluish color around her mouth. Devan eventually would have to be admitted to Baptist Hospital for a week, and a pediatric neurologist determined her lungs had not expanded or inflated fully because of the way Lynne had carried her during the pregnancy.

The good news was it was just a matter of time before Devan’s lungs began working at 100 percent.

“You see, what happened was I punched her a lot,” Heather says.

It’s the ultimate ribbing of a sister.

As infants, the girls quickly became distinguishable by the color of their hair and their personalities. Devan had dark hair and resembled her mother, but she mimicked her dad’s quiet demeanor.

Heather was a redhead — a ginger snap, she says — favored her dad in looks, but was outgoing like her mom.

Through their first year in college, when they were freshman roommates at Catawba College, the girls were inseparable. Lynne persuaded administrators to keep them in the same class during elementary school, mainly because Neal, who made a career out of the Army and Army National Guard, often was deployed somewhere.

Devan and Heather were in Girl Scouts and gymnastics together, took nine years of dance classes, and, once they reached middle school and high school, participated in track, swimming, cross country and color guard at Carson High School.

After her freshman year at Catawba, Heather transferred to the University of North Carolina at Wilmington, where she earned a degree in social work. She now works for Rowan Treatment Associates.

Devan graduated from Catawba with an administration of justice degree. She also minored in psychology. She works with the Rowan County Clerk of Court’s Office.

Heather met John when both were volunteers with the East Spencer Fire Department. They have been married for two and a half years. Devon served as maid of honor at Heather’s wedding.

John, who earlier this year completed a four-year stint in the Navy, now works as a security contractor for Homeland, but his ultimate goal is to go back to school and become a nurse practitioner.

Knowing the difficulty Lynne had faced in becoming pregnant, “we were expecting to have issues,” John says. It weighed on their minds as they talked about having children, and it concerned their doctor, too.

But those worries about conception were unfounded, and Heather’s pregnancy has gone splendidly — no morning sickness and moderate weight gain.

Now Lynne and Neal Purvis are preparing to spoil their first grandchild. With Kayleigh’s arrival, Neal notes, he’ll have even more women to contend with.

“Me and John — we kind of stick together,” he says.

This spring, John and Heather purchased a Harrison Street house in Spencer not far from North Rowan High School.

“We have plenty of room to grow,” John says.

When asked how many children he would like to have, John blurts out “19” without hesitation.

Then she gives it a little more thought.