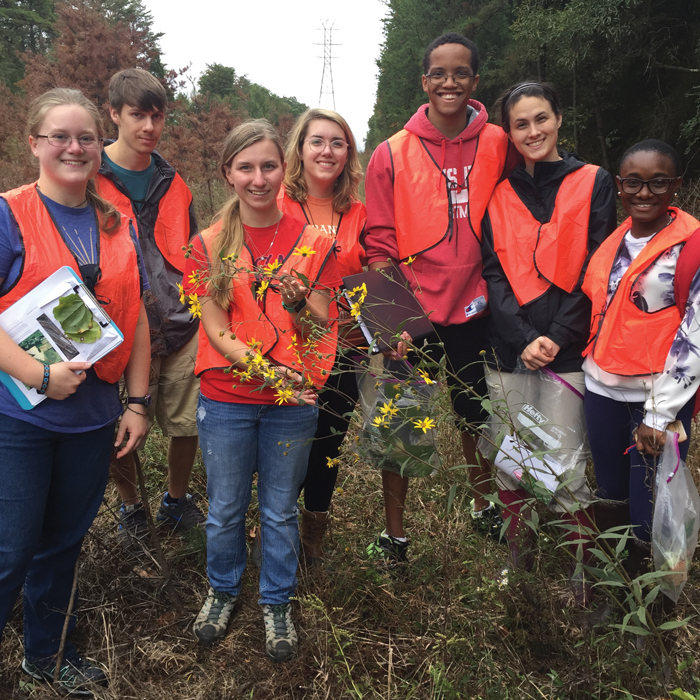 SALISBURY — As summer turned to fall and leaves changed color, there were also dazzling displays of yellow asters on roadsides, including native ragweeds, Spanish needles, sneezeweeds and sunflowers.

In a few isolated roadsides in the Carolina Piedmont, the yellow floral display includes the federally endangered Schweinitz’s sunflower.

As a service learning activity, members of Catawba College Professor Jay F. Bolin’s field botany course worked with the U.S. Fish and Wildlife Service and North Carolina Natural Heritage Program to take a census of all known populations of Schweinitz’s sunflower in Rowan and Cabarrus counties.

Unfortunately, all the known populations in the two-county area do not occur in formally protected natural areas or parks but cling to roadsides and power line or sewer rights of way. Roadsides and maintained rights of way provide suitable but precarious habitat where mowing simulates the effects of fire and herbivore grazing.

Catawba College field botany students surveyed 15 sites for Schweinitz’s sunflower during October, aided by geographic information system data provided by the National Heritage Program that they loaded into Google Earth on their smartphones to pinpoint the populations in the field. Most sites had been surveyed about five years ago, but one site had not been surveyed since 1991.

Elizabeth Howard, a senior biology and environmental science major from Mocksville, said, “The sunflower survey was a great experience to have because these are plants you don’t get to see every day and it feels good to be helping to conserve them.”

After the fieldwork was completed, the students summarized the data and submitted it to the Natural Heritage Program and Fish and Wildlife Service. The data will be used as part the Wildlife Service’s five-year review of the recovery plan for the endangered species.

Laura Fogo, fish and wildlife biologist for the the Wildlife Service, said she was thrilled with the hard work of Catawba College students.

“This is great teamwork to help recover an endangered species,” she said.