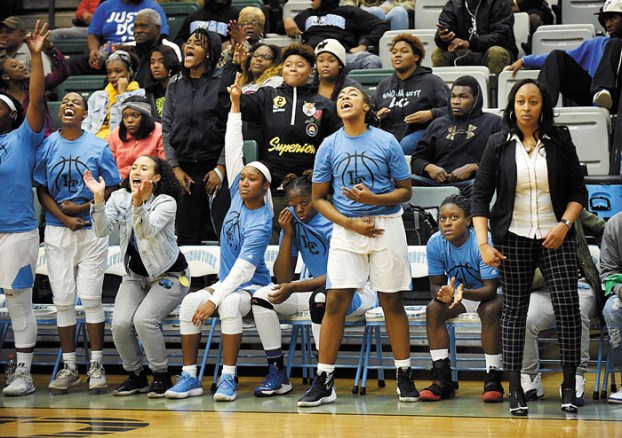 “This is the team we’re supposed to be,” Searcy said, after LC (1-2) shook off some early rust and rolled to its first win. “This is who we are. After practice yesterday we realized it was time to go.”

Lovette had 20 points and 11 rebounds in her first game. She didn’t make the weekend trip to West Chester, Pa., where Livingstone dropped its first two games.

“It was a rough road trip,” second-year coach Tiffany Silver said. “We have a lot of freshman, a lot of babies, who were taking their first trip. But the good thing is they’re all getting better.”

None looked more battle-tested than Perkins, a true freshman out of Leland and North Brunswick High School. The 5-foot-9 forward was a difference-maker, netting 24 points off Livingstone’s bench — including a runaway layup that gave the Blue Bears a 52-32 lead early in the third quarter.

“I was just trying to help out,” she said, after shooting 11-for-17 from the floor. “We play a lot of really good upperclassmen. I just wanted to do my part.”

Sometimes you have stand out to fit in. And Perkins — who totaled nine points in her first two collegiate games — was impossible to ignore. It was her steal and fast-break layup that tied the score, just seconds into the second period. And her three-point play, off a power move along the left baseline, put LC ahead 18-15 with 9:17 remaining in the first half.

“She’s about to be the future of Livingstone basketball,” said Lovette, the do-it-all junior. “I like playing with her. She’s not scared, not intimidated by anything.”

While Silver was equally impressed, she believes Perkins can be even more productive. “Honestly, that’s the game she should have every night,” she said. “She should have more. She definitely has the ability. The part of her game she needs to work on is her mental toughness, staying in it and learning the game at this pace.”

The Blue Bears shot 42.5 percent from the field, but that included a dismal, 4-for-16 first-quarter display. They seemingly installed a new set of batteries in the second period and played with increased energy, surging to a 40-30 halftime lead.

“They’re a very aggressive scoring team,” losing coach Revonda Whitley said after Claflin dropped its season-opener. “They have a lot of savvy. I mean, we came in believing Livingstone was not a 3-point shooting team, but they knocked down a lot of incredible shots.”

Livingstone held a 25-23 lead after Searcy converted the first two of three free throws midway through the second quarter. The third attempt back-rimmed to Lovette, who rebounded the ball, took a step backward and drained a 3-pointer from the right side that shifted momentum LC’s way.

“The adrenaline was pumping,” Lovette said after sinking four 3-pointers.

It was off the charts as the third period unfolded. Lovette and Searcy had back-to-back threes to launch a 12-0 run that put the Blue Bears ahead by 20. “That told them it was over,” Lovette explained. “They were a decent team, but we were a better team.”

Searcy had 20 points, seven rebounds and six steals. She’s the team scoring leader through three games, averaging 16.3 points-per-outing. On a roster that includes eight freshman and no seniors, her leadership skills will be pivotal.

“As juniors, we have to step forward this year,” Searcy added. “It’s not like we’ve played together for the last two years, but we were pretty good tonight. This is the day we’ve been waiting for. It sets a bar for us. Now we’ve got to continue moving up.”

NOTES: Livingstone held a 55-44 rebounding edge, including 21-8 in the decisive second quarter. Perkins scored 13 points in the second period while the Blue Bears’ defense forced Claflin into a 2-for-13 shooting funk. … Six-foot senior Joy Okeke shot 8-for-14 from the floor and had 19 points and 10 rebounds for Claflin. Teammate Dominique Williams added 20 points and eight rebounds. … Livingstone’s defense forced 25 turnovers. … This was the first of three straight home games for the Blue Bears. They host Puerto Rico Bayamon on Friday night and Queens next Tuesday.