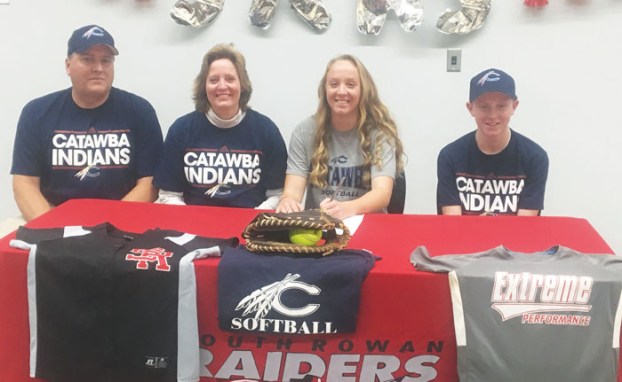 Submitted photo ... South Rowan’s Brooke Lowery, second from right, signed with Catawba College on Monday, to continue her education and softball career. She is shown with her parents, Mike and Miriam, and brother, Ty. Wayne Hinshaw file photo/for the Salisbury Post … Brooke Lowery (27) is shown sliding into third base during American Legion softball action against Stanly County in June. Lowery, a two-sport standout at South Rowan, has signed to continue her education and play softball at Catawba College.

LANDIS — Dean Mullinax had coached a lot of football and baseball, but he’d never coached girls before when he took over South Rowan’s softball program prior to the 2017 season.

One of the first people he encountered at his first offseason workout was Brooke Lowery.

Since Lowery is a first baseman, it would be nice if she stood 5-foot-10 instead of 5-foot-7, but her work ethic and a quick left-handed swing have compensated for what she lacks in inches. And she will be a next-level player.  She signed with Catawba College’s softball program on Monday.

“I’ve known the coaches at Catawba for years, and I know how hard they work, and I already know a lot of the players,” Lowery said. “I really liked Appalachian State at one point, but a smaller school with smaller classes is the best place for me.”

Lowery has been on South’s varsity since she was a freshman, so she was a high school teammate of current Catawba junior Beth Ann Martin.

Coaches were going to find a place in the lineup for her somewhere because of her bat. She throws right-handed and shoots a basketball right-handed, but when she picked up a bat for the first time,  swinging left-handed felt most natural to her. That’s been a big advantage for her as her softball career has progressed.

Lowery started playing travel softball at age 12, relatively late in a sport in which Rowan County has put 10-year-olds in the World Series. Her early years were focused mainly on basketball.

She held her own for South’s varsity as a freshman, batting .333 in a stout league with nine RBIs in 45 at-bats.

As a sophomore, she hit .382 and walked 12 times while striking out only eight times. She had an on-base percentage of .521 and made the All-Rowan County team for the first time.

“What I remember most about that game is that it was freezing cold,” Lowery said with a laugh.

Before March was over, she’d homered in back-to-back games against Hickory Ridge, one of the best teams in 3A, and Robinson.

Lowery turned out to be one of the county’s top five players, putting together a super junior season. She hit balls in the gaps with authority. She had hits in 20 of South’s 25 games and paced  the Raiders in every offensive category with two triples, eight doubles, 18 runs, 24 RBIs, a batting average of .382 and an OBP of .488. She tied with third baseman Mataya Reynolds for the team lead in homers with four. She was all-county for the second time as well as All-South Piedmont Conference.

“She just kept getting better and better and better,” Mullinax said. ” She can execute in the short game if needed, but usually we needed her to swing away. She had  a very productive season in the SPC.”

The SPC was tough. South was only 8-17, despite big wins against East Rowan and West Rowan. The Raiders lost five times by a single run, including a 2-1 first-round playoff game at Enka, always one of the top teams in 3A.  Lowery went 2-for-3 in that game in the mountains and drove in the Raiders’ only run.

Now South has moved down to the 2A Central Carolina Conference for Lowery’s senior season. Her numbers should only go up.

“We should have very good seasons in softball — and in basketball,” Lowery said.

Lowery contributed to a winning South basketball team as a junior. She was a starter, swished a lot of 3-pointers and averaged 4.2 points per game. Lowery is excited about what the Raiders can accomplish this year for coach John Davis with all five starters, including Rowan County Player of the Year Janiya Downs, back in uniform.

But softball is Lowery’s future. It could be a bright one.

“She’s one of those girls who is willing to do even the things that she doesn’t want to do in order to keep getting better,”Mullinax said. “She never misses anything. She goes to all the camps. She’s working all through the offseason, and she’ll keep working during the season.”

Lowery played on Rowan County’s first American Legion softball team last summer. She was the first baseman and one of the team’s best hitters, belting a homer against Montgomery County before she was knocked out by medical issues. She had an appendectomy, followed by a kidney infection.

Lowery, who plans on a nursing career, is healthy now and is back to her routine—workouts, basketball practice, church functions, shopping and hanging out with friends and teammates.

Everything about her looks normal — except for a very special swing.