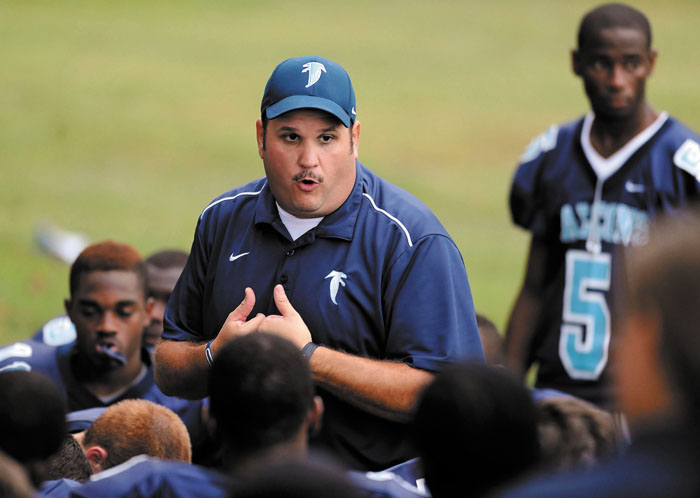 Young, 45, had a long history of heart problems, which led to his receiving a heart transplant on May 28, 2016. He resigned from his West Rowan coaching job in April 2015 for health reasons.

A memorial service for Young is planned for 2 p.m. Sunday at the West Rowan High football stadium. In tribute to Young, stadium lights at all six of Rowan County’s empty high school football stadiums were turned on at 7:30 Wednesday evening.

At his death, he was on the coaching staff at Statesville High School, where his son Bryant was quarterback. Father and son returned to Mount Ulla for a Statesville-vs.-West Rowan High game Nov. 3, and Bryant Young led the Greyhounds to a 34-24 win.

Scott Young is survived by his wife, Dianne, who also is a teacher, sons Bryant and Brody, and daughter Ally.

Dianne Young posted a message on Facebook on Wednesday morning about hearing the Chris Tomlin song “I Will Rise” on the radio as she and her children got into the car and followed the ambulance taking Scott to the hospital.

“We fervently prayed for a miracle and selfishly asked God not to take him from us,” she said. “Unfortunately for us, Scott is now in heaven. Everyone worked so hard to save him, and he fought even harder. Please keep our family in your prayers. We love him so much and will miss him terribly.”

Young’s three state championships at West Rowan High came in 2008-10. During 17 seasons at West Rowan, he collected 172 wins and captured nine conference titles. Before 1998, Young had been an assistant at Davie County for four seasons.

He was a graduate of East Rowan High School and Guilford College.

Young was the surprise coaching choice in 2016 to head Independence High School’s football team in Charlotte just weeks before his transplant surgery, but he was relieved of his duties that August before being able to coach a game.

After his transplant, Young endured a hospital stay of 49 days. In recent weeks, he reportedly had been struggling with his health.