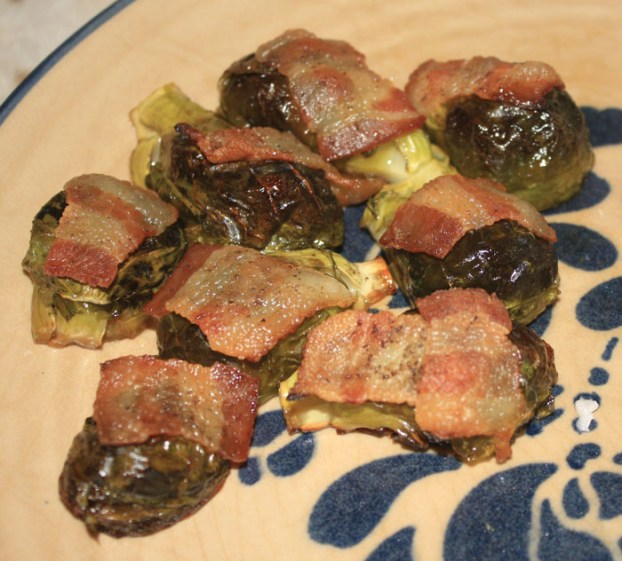 Deirdre Parker Smith/Salisbury Post Maple-glazed Brussels sprouts with bacon are sweet and salty and tender, a great Thanksgiving side dish.

Side by side dishes for Thanksgiving kitchn Parmesan-Thyme Mushrooms are a quick and delicious side dish for any meal, and easy to take to a Thanksgiving gathering.

I admit it, I have this thing for Thanksgiving side dishes. For most of my life, the sides were stuffing with celery and mushrooms cooked in the bird (deliciously moist), a pile of buttery mashed potatoes, green beans, cranberry-orange relish and lots of rich gravy.

Some years we had creamed pearl onions and once we tried Brussels sprouts — that was a tough year. We have been known to substitute creamed spinach for the green beans.

My husband’s family is all about sides. Some years it’s two or three kinds of dressing, and green beans and corn and macaroni and cheese and dumplings and broccoli-rice casserole and potato salad and deviled eggs and cranberry crumble and candied sweet potatoes and we lapse into a coma.

Since my father passed away Sept. 19, we won’t be doing two Thanksgiving dinners. It’s going to be hard. Dad always made the cranberry orange relish and I always made him a maple pecan pie. Mom passed away in 2010. She taught me how to make perfect gravy.

So, I’m fantasizing about what could be, and I’m hoping some of you will try something different, or cook a different side for your leftovers.

Dad would have loved the mushroom recipe. It’s easy and would be good with just about anything.

The Kitchn, my current favorite food blog, says Cooking Light has one of the best Thanksgiving issues this year, and recommends Bon Appétit, Martha Stewart Living, Rachel Ray Every Day and Southern Living for other good Thanksgiving issues.

And speaking of Brussels sprouts, here’s a recipe that might convert some people. First of all, it involves bacon, and everything’s better with bacon. Second, it has maple syrup that will cut that slightly bitter taste that some of us love. Third, roasted brussels sprouts are completely different from the soggy ones that get boiled for far too long.

The Brussels sprouts I found in the grocery store were quite large, so I trimmed the ends slightly, remove any beat-up leaves and halved them. It is vital that you line your baking sheet with foil, or you will still be chipping off caramelized maple syrup next Thanksgiving.

The original recipe called for baking the sprouts at 400 for 45 minutes. They would be hard burned bits that way. I tried 30 minutes, and the bacon was cooked, but the sprouts were pretty soft. I may lower the temp to 375 next time.

I suggest you mix the maple syrup and just 2 Tbsp. of olive oil with salt and pepper thoroughly before adding to the sprouts.

My husband, who won’t eat Brussels sprouts unless they are deep-fried, really liked these.

Preheat oven to 400 degrees. Line a baking sheet or dish with foil. Stir together olive oil, maple syrup, salt and pepper until thoroughly combined. Coat the Brussels sprouts with the mixture and spread in a single layer on the baking sheet. Top with bacon.

Roast until bacon is crispy and sprouts are caramelized, 20-30 minutes, depending on size of sprouts and thickness of bacon.

Heat half of the the oil in a 12-inch or wider skillet over high heat until shimmering. Add half of the mushrooms, stir to coat with the oil, and arrange in a single layer. Sear undisturbed until the bottoms are well-browned, about 3 minutes. Transfer to a bowl. Repeat with the remaining oil and mushrooms.

Return all the mushrooms and any accumulated juices to the skillet. Season with the salt and pepper and cook, stirring once or twice, until the mushrooms are browned all over, 5 to 6 minutes.

Add the garlic and cook, stirring frequently, for 1 minute. Pour in the wine and use a wooden spoon to scrape up the browned bits from the bottom of the pan. Cook until the wine is completely reduced, about 1 minute. Remove from the heat and stir in the thyme and cheese.

Non-alcoholic substitute for wine: You can substitute 1/4 cup apple cider vinegar in place of the white wine if desired.

Arrange a rack in the middle of the oven and heat to 350 degrees. Lightly coat a 9-by-13-inch baking dish with butter.

Beat the eggs in a large bowl, then whisk in the half-and-half, butter and cheese. Add the flour mixture and stir until completely combined and smooth. Add the corn and fold to combine. Transfer the batter to the prepared baking dish and smooth into an even layer.

Bake until lightly browned around the edges, the pudding is set, and a knife inserted in the center comes out clean, 35 to 40 minutes. Let cool for 5 minutes before topping with the scallions, slicing, and serving warm.

A taste of Italy: La Cava owner has passion for cooking, customers