On the fence: Lee Wagoner breaks up boulevard monotony 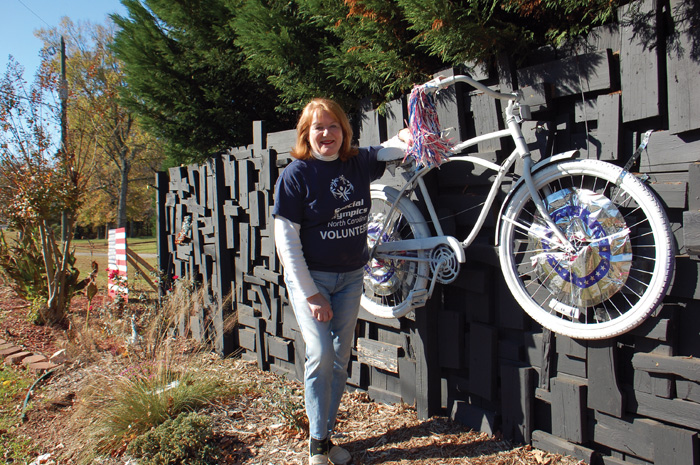 One of the things that usually catches people's attention about Lee Wagoner's fence along Jake Alexander Boulevard is the painted bicycle, which over time has been painted different colors, including purple, pink and white. Mark Wineka/Salisbury Post

SALISBURY — If you’ve ever driven along Jake Alexander Boulevard — and who in Rowan County hasn’t? — you might have noticed Lee Wagoner’s long fence, stretching toward the Faith Road intersection.

The fence is Wagoner’s canvas. Most people are drawn to the bicycle attached to it and marvel at the unusual, three-dimensional texture Wagoner has given the fence. Since 2016, she has decorated it with seasonal and holiday themes — and even heartfelt prayers.

Last October, for example, Wagoner affixed 100 signed, pink hearts to the fence so her daughter-in-law, Amy Wagoner, who was dealing with breast cancer, could see them every day from her house across the five-lane highway.

“I thought it would cheer her to see the hearts up there,” Wagoner says.

Amy is doing great, by the way.

Lee and her husband, Bobby, put up their tall fence along Jake Alexander Boulevard about 10 years ago, mostly to serve as a trash and sound buffer. But Lee’s creativity and craftiness finally could not resist doing something more with the mundane barrier.

Now people see her around town and say, “Oh, you’re the fence lady.”

It’s not unusual for motorists to slow down or stop for a closer look at the fence, and the more curious frequently try to find the Wagoner house off Vine Street to talk more about it.

“I’m happy that my husband’s so tolerant,” Lee says. “I told him I made him a star.”

The Wagoners also have handsomely landscaped the small embankment next to the fence, and the city of Salisbury’s Community Appearance Commission once named it the residential “Landscape of the Month.”

“I get such a great reaction,” says Wagoner, a former accountant and retired caterer.

Once a neighbor left her four handmade birdhouses to go with her fence’s spring/Easter theme. He left them for her to find, tucked behind the fence. Wagoner was touched.

“They’re beautiful,” she says. “I just thought that was so kind.”

The texture of the fence comes from boards that provided a long ramp for her late mother, who had lived with the Wagoners for 10 years.

Instead of discarding the wood after her mother’s death, Lee used various saws in Bobby’s shop to cut the boards into different sized pieces, which she then nailed to the fence in a random, but somehow beautiful, way.

“It kind of fit where it fit,” Wagoner says.

She also painted much of her fence black, which is unusual but striking. In a few sections, Wagoner left the pieces of wood unpainted, and many people seem to like that touch, too.

“It seems every month or so there are different colors, items attached on this fencing,” Madeline J. Zieverink said in an email to the Post “… I enjoy riding by there and seeing what is new and creative on the fence.”

This whole thing with the fence started in about April 2016, and it was partly inspired by a sermon Lee Wagoner heard from the Rev. Rhodes Woolly, pastor at St. John’s Lutheran Church. He had talked one Sunday about Adam and Eve and how “it started in a garden.”

In a way, the fence is Lee’s garden.

The bicycle represents one of the fence’s conversation pieces. Lee says she saw it discarded in some trash along the street and decided to incorporate it. Depending on her fence theme, the bicycle has been painted purple, pink and white.

It once was stolen off the fence, but someone called the Wagoners and told them the bicycle had been left on a corner not far from the house.

Wagoner apologizes for the state the fence is in right now. She’s preparing to change everything for the holidays. Look for Santas and elves in the days and weeks ahead. Further in the future, Wagoner thinks she’ll turn to mosaic and a carousel horse theme for at least four sections of the fence.

“Sometimes my ideas are years ahead of me,” she says.

Meanwhile, Wagoner is sharpening her skills and learning how to weld from Bobby. She has never thought she was the artist in her family, “but I can build or make anything, and if I can’t I have someone show me.”

As for her fence, you keep coming back to Wagoner’s simple canon: Why do we have to be boring?

“I get joy out of it,” Wagoner says. “I’m glad it’s appreciated more than anything.”